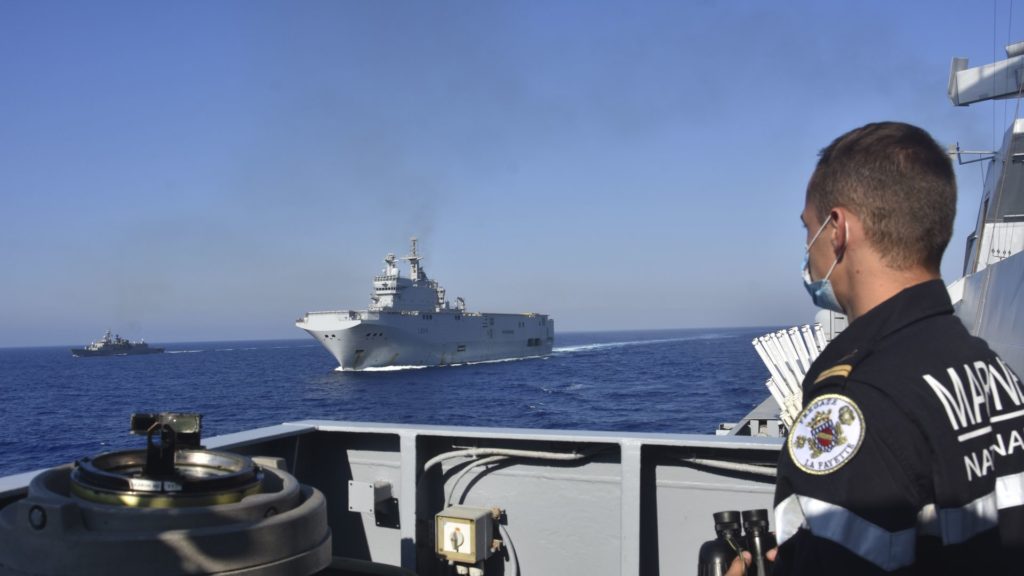 Photo from 14 August, 2020 by the French Defence Ministry shows the French Tonnerre helicopter carrier, centre, escorted by Greek and French military vessels during a maritime exercise in the Eastern Mediterranean. Greece’s prime minister warmly thanked France Thursday for boosting its military presence in the eastern Mediterranean, where Greek and Turkish warships are closely shadowing each other over a Turkish energy exploration bid in waters Athens claims as its own. Photo: AAP via AP

“The European Union would rather concentrate on toppling [Belorus dictator Alexander] Lukashenko than protect two of its member countries – Greece and Cyprus – from the Turkish threat,” the Athens daily Efimerida ton Syntakton (Η Εφημερίδα των Συντακτών) complains in a commentary.

“While on the same day [German] Chancellor Angela Merkel travelled to southern France for relaxed talks about ‘external hotspots’  with President Emmanuel Macron in the luxurious Fort de Brégançon, the summer residence of French presidents, Greek media continued frantically to invoke the danger of war in the eastern Mediterranean, the election in Belarus and its consequences pushed the conflict in the Aegean out of most European headlines.”

The German daily junge Welt, which describes itself as left, Marxist-oriented and “published by 2346 comrades”, has picked up on the Athens paper’s reporting and added commentary of its own.

“Yet again and rightly so, the Greeks are driven by the worry not to be playing a big part in the conflicts over the interests of European great powers France and Germany. Although the French president last week sent two frigates and two heavily armed Rafale fighter aircraft to the NATO base at Souda in Crete, Greek media and members of the left political opposition saw that as more of an attempt by Macron ‘to distract from the failed French intervention policy’ in Libya.”

The prestigious Paris-based weekly Le Monde already in June saw the French taking advantage of the tension between neighbours and fellow NATO members Greece and Turkey.

READ MORE: Greek sale of 101 armoured troop carriers to Egypt which it had received from Germany

Mr Macron‘s upping the French military presence in the Aegean and his brusque demand to the Turkish autocrat, Recep Tayyip Erdogan, immediately to stop gas and oil prospecting in Greek waters could only be seen in connection with Nicolas Sarkozy, Mr Macron’s predecessor, triggering the Libyan civil war nine years ago and the conflict raging since then about geopolitical supremacy, Le Monde comments.

Turkey and France [both in the North Atlantic Treaty Organization (NATO)] confront each other there as quasi-enemies through their support of different political camps.

Whereas the French, as Le Monde regretfully notes, support the renegade General Khalifa Haftar, who is not recognised by the United Nations, and in so doing “backed the wrong horse”, Turkey is siding with the government of Fajes Al-Sarradsh, which is recognised by the UN.

Seen in that light, wrote the commentators at Efimerida ton Syntakton (Efsyn), the friendship pledges by Mr Macron and the Athens government are for now “just empty words”.

“Emmanuel Macron is a true friend of Greece and a determined defender of European values,” Greece’s Prime Minister Kyriakos Mitsotakis, who in best European tradition grew up multi-lingually, twittered in French to Paris last week – an assessment a majority of Greeks definitely don’t share.

“How else could it be understood that France, just like the ‘leading European power’ Germany almost daily allow Erdogan to blackmail them and to leave Greece, whose borders are also the EU’s external eastern frontiers, in the lurch with the refugee problem?”

Not without reason, in his statements on the state of the nation, Mr Mitsotakis so far has insisted on the primacy of diplomacy, taking the position that joint talks are indispensable, involving a mediator if needed. His government did not expressly welcome the arrival of French warships and combat aircraft. So for the moment it’s just sharp verbal attacks.

At a recent joint Macron/Merkel press conference in Berlin Macron accused Turkey yet again of being mainly to blame for the continuing warfare in Libya. He also sharply accused Ankara of not respecting a single outcome of the January Libya conference in Berlin. On the contrary, he charged, Turkey had scaled up its military presence in the country and deployed “jihadist fighters from Syria” in large numbers. Macron gave the NATO member an “historical and criminal responsibility” in the Libyan conflict.

When Mr Mitsotakis in Athens, egged on by his “friend” Mr Macron, sends his navy into the water off the tiny Greek island Kastellorizo for joint manoeuvres and warns the Turks against attacking, President Erdogan rages in Ankara against the “gangster” in Paris, pledging: “You will pay a high price if you attack our research ship.”

“Not a thing will be decided in Athens,” Efsyn regretted on Thursday in wise foresight. “Anyone demanding restraint from Erdogan and able to nail him down on the Greek territorial rights inscribed since 1923 in several international agreements, and recognised by Istanbul for more than a century, would have to be at home in Berlin or Paris.

“Or, as currently in southern France, confer about a country from which one has demanded everything in the past ten years: the far-reaching destruction of its social security systems, the halving of the anyway lean retirement benefits of its old people, the selloff of all state property to private buyers, the completely respectless disregard of a popular vote against cutting policy enforced by Germany and the supervision of its national budget by politically not legitimised controllers from Brussels.”

Mr Macron and Ms Merkel do indeed have other worries than trying to calm down 11 million Greeks. In Fort de Brégançon, at the blue sea near Saint Tropez, the topics are coordination of their stances on Belarus, Libya and Mali. There, as also in Tripoli, Macron and his army strategists have to come to terms with severe political and military defeats.

“The coup by the generals in Mali [landlocked in West Africa] has robbed the head of state and his government in Paris of the deposed president and political partner, Ibrahim Boubacar Keïta, corrupt, like most marionettes of postcolonial Françafrique.”

Germany also has “peacekeeping” troops in Mali. Berlin has armed up both Ankara and Athens.

junge Welt reported that the Germans and the French have for decades supplied the arms market, stirring up wars while talking peace. “That goes for both governments, in Paris and Berlin – regardless of social democrat or right-wing conservative; even the spirited opposition, green or right, applaud. The French armament industry is booming, last year surpassing fourth-placed Germany and now placed third on the red list of the Stockholm International Peace Research Institute (sipri) behind the USA and Russia.