A faded photo snapped by Dora Houpi which made the front page 27 years ago, when she was just a young journo. Photo: Dora Houpis

The blankness on Father Andreas Papadimitropoulos’s face as he said these words to the television camera in Greek, last Sunday, was palpable. He was so sad. He had not seen the faithful attend his Greek Orthodox Church, St Catherine, for more than six months.

But if Fr Andreas was also weary from the coronavirus restrictions that had seen churches close and parishioners prevented from attending church, he was not showing it.

He, his two chanters and one attendant embraced the television cameras and delivered a flawless church service, predominately in Greek, when it was televised live on community television station, Channel 31, last Sunday, 13 September, at 9.30am. (The station also televised live Good Friday and Easter Saturday services during Victoria’s first lockdown.)

But, then again, this old hand always had presence.

I first met Fr Andreas in 1993 when I was a young reporter with News Ltd’s, Leader Suburban Newspaper Group. I wrote a story about the meaning of Orthodox Easter, including Greek Orthodox celebrations, titled “The holiest of holy week…”, for the Malvern –Caulfield Progress.

I interviewed different Orthodox priests from within the newspaper’s distribution area, including from the Russian Orthodox church. I also interviewed Fr Andreas, whose church was in the Melbourne south-eastern suburb of East Malvern. The picture accompanying the story was of Fr Andreas administering Holy Communion. It was so powerful, it made the front page. 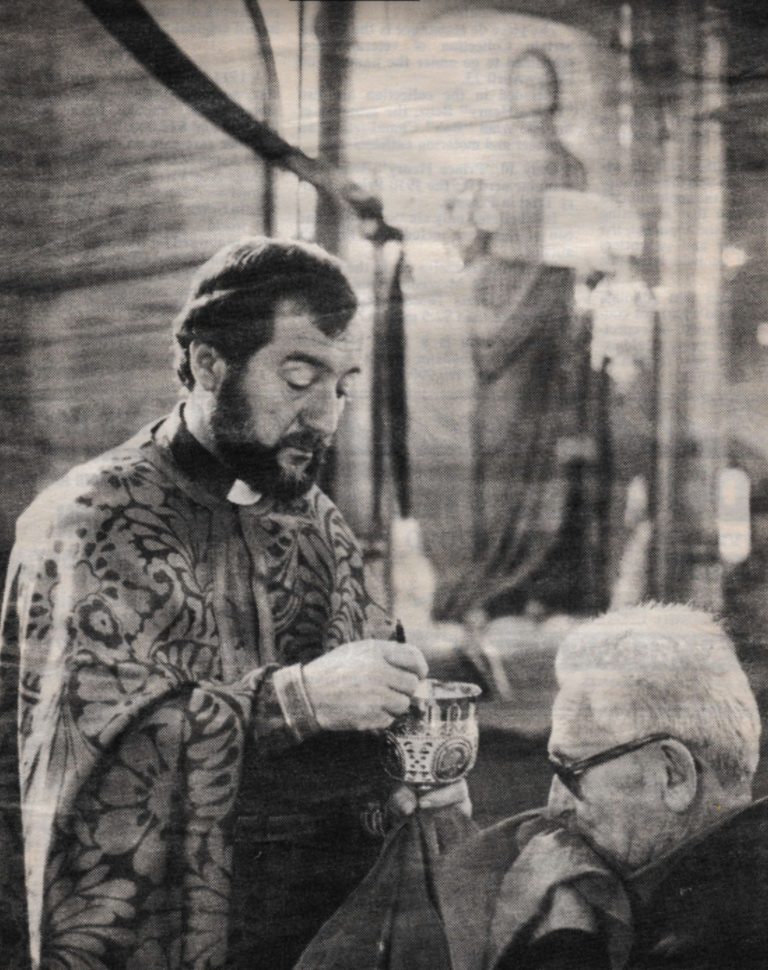 The company’s then southern region group editor, Russell Robinson, who went on to become a veteran award-winning investigative journalist at the Herald Sun, instructed it.

We were laying out the paper, and my editor wanted to put on the front page the picture of dancers that banged together large metal garbage bin lids as part of their performance. It was an overseas act that was all the rage in Australia at the time. The group editor, Russell, who was walking the floor joined us, took one look at the photo of Fr Andreas and put it on page 1.

On Sunday, after 27 years, Fr Andreas was still page 1 material. He still had “it”. He was in command, in harmony and on my television screen.

The televised service offered a close-up and captivating look at the Greek Orthodox Sunday church service.

READ MORE: What the loss of Channel 31 would mean for Victoria’s diverse communities and the media industry

To the left of the priest were the two chanters in black robes with a thin white collar. Elevated, the viewer could see them clearly. There was the Psalter, the Book of Psalms, written in Greek, constantly being consulted, spiral folders being flicked back and forth to the right psalms, exchanged glances serving as cues to signal the next psalm that had to be chanted and the overhead light beaming brighter than white to magnify the written text.

The pair chanted in unison until the head chanter stopped. He grabbed his mouth and chin, and anxiously got ready to instruct.

He elevated his hand to signal for the other chanter to keep going. He did. The crescendo was building and he held his hand a little higher, and a little higher still. The chanter held the note: he kept holding it. The head chanter got ready, his hand was poised. The climax was coming. It was here. He cuts the air with his hand and the chanter stopped. Perfect.

They whispered about the next psalm and then started chanting in unison again. Reading glasses were adjusted and the pair moved closer to the books. Then it was Fr Andreas’s turn. A good time for the chanters to take a breath and monitor the audio equipment. It had to be just right.

Fr Andreas, previously occupied at The Altar (Aγια Τραπεζα) turned around and came out. He bowed to the empty pews. The chanters started again.

One used his finger to guide himself along the page as he chanted, the other knew that section by heart. Then there was an exchange between the priest and the chanters and the chanters continued.

They chanted confidentially. They chanted clearly. They began to build it up again. One broke away. He readied himself and out it came: reading in English, with a perfect Australian accent.

What’s this? They chant in old Greek, jump from one book to another, from one Greek psalm to another, and then break out into perfect English to read from the scriptures. These guys are a two-man, smooth-as-silk, bilingual chanting machine.

Meanwhile, Fr Andreas, with his head down in concentration, consulted his holy books and waited for his cue. He never missed.

He got the thurible and swang it gently as he walked. He went to the front of the church, did his cross, bowed, turned around and bowed to the empty pews again. The fourth person in the church, the elderly attendant in a suit and tie and wearing a mask, then took the thurible.

READ MORE: The sites, sights and sounds of COVID-19 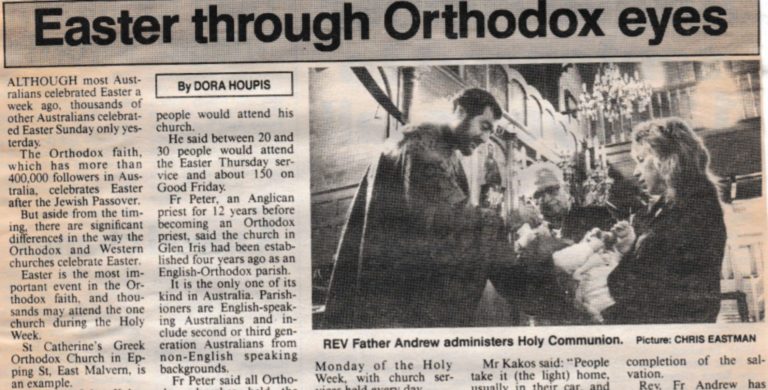 Fr Andreas went back inside behind The Altar.

He came out wearing a short maroon-coloured velvet cape with bold gold crosses embroidered on it and carrying two Holy Communion goblets with coverings that matched his cape. He walked around with them. He put them away. He turned to the empty pews and did his cross. Aγαπήσουμε αλλήλους and love they neighbour,” he said, and bowed to the empty church.

The chanter read The Creed in Greek and the television cameras returned their focus on them. The chanters signalled each other to get ready. They started chanting, alternating between themselves and Fr Andreas. Bells began to ring. Fr Andreas chanted and turned again to the empty pews and did his cross. He went back to The Altar. The chanters recited the Lord’s Prayer in Greek and then English. They continued to chant.

Then Fr Andreas read from the holy books and started chanting on his own. He could still hold a note. He reached a crescendo, his voice never quivering. He knelt at The Altar. The chanting continued and the television camera took close-ups of the gold encrusted icon of the Virgin Mary and baby Jesus. The chanters kept chanting.

Fr Andreas said: Meτα φόβου Θεου, and how we should fear God and that: Είδομεν το φως το αληθινόν and about seeing the true light. The chanting continued. The Holy Communion came out, but there was no one to receive it. Fr Andreas took it back. He came out again and read to the icons to the left of him. He did his cross. The chanters continued chanting.

Fr Andreas came out again and faced the empty church. He recited holy words. He did his cross. He gave his sermon. He told the empty pews that tomorrow, 14 September, was The Elevation of the Venerable and Life-Giving Cross or, to lay people, του Σταυρου. He told the three other people in the church about the Israelites lost in the desert, who saw the error of their ways and repented. Fr Andreas preached about God sending Jesus to earth and about the importance of faith.

Then, just before the end of the telecast, Fr Andreas spoke to camera from the heart.

Speaking in Greek, he said he was thankful for the opportunity to be on Channel 31 and lamented to the parishioners watching him on their television screens from home about the affects COVID-19 was having on the church and them.

“Since February we haven’t seen one another,’’ Fr Andreas told us.

“ Today, our church is empty.

It was just him, the attendant and the two chanters, he said.

But, he had hope and their driver was Jesus Christ.

“My brothers and sisters, don’t lose heart. ‘Til we met again.”

And the chanters kept chanting.