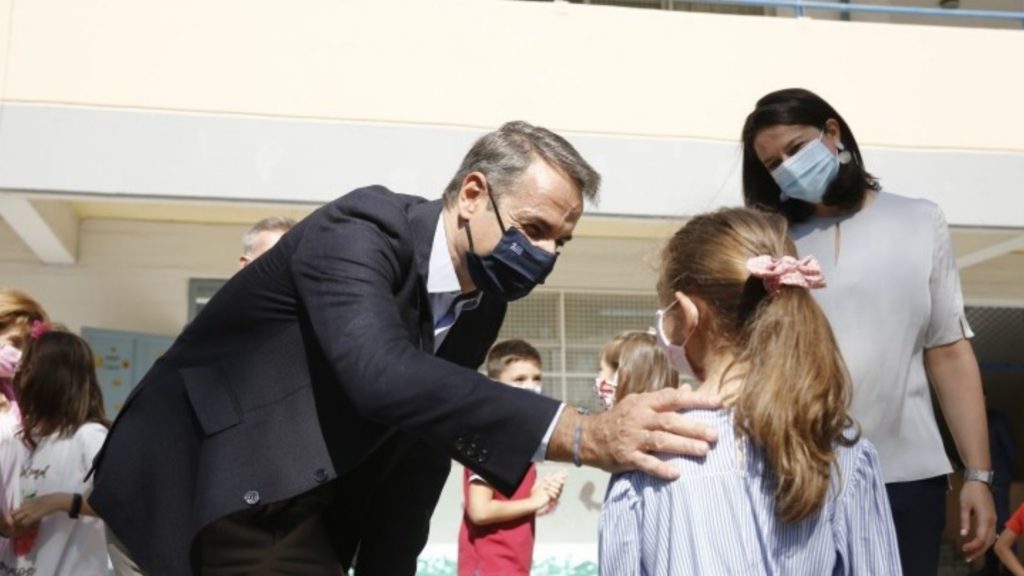 Greece’s Prime Minister Kyriakos Mitsotakis with a student on the first day of the Greek school year.

There were only 22 new cases traced to known sources, where as 21 were identified at entry points.

There have been a total of 13,420 cases in Greece since the pandemic broke. Of these, 2,419 are linked to travel abroad and 5,789 to already registered cases.

There are 59 Greeks in ICU.

The five deaths take the total number of coronavirus-related deaths in Greece to 310. The deaths concern mainly the elderly, with an average age of 78 years. A large 96.4 per cent of deaths in Greece concern those who had an underlying condition or were aged 70 and above.

The Greek government is expected to announce restrictions to help curb the virus, reports the Greek press, and there is talk of the possibility of a three-week lockdown. Authorities are concerned that the spike could overwhelm the country’s hospitals if left unchecked.

There are also fears concerning the further spread of the virus with the start of the new school year in Greece on Monday. Students returned to schools for the annual blessing ceremony, and are obliged to abide by new health safety regulations which requires them to wear face masks in the school yard and high school. Some precincts saw anti-mask groups handing out pamphlets. In Chania, Crete, a man physically attacked a teacher at the main gates of a high school after he refused to put a mask on his child. The teacher was taken to hospital for treatment.

Similar incidents were noted around the country, though the return was smooth at the majority of schools.

Greece’s Prime Minister Kyriakis Mitsotakis attended the blessing ceremony at the 7th Primary School of Agion Anargyron, accompanied by Greek Education Minister Niki Kerameus. “It is a moment when you are allowed to copy each other,” he said, “in wearing masks, keeping distances, washing your hands, and avoiding many hugs.”