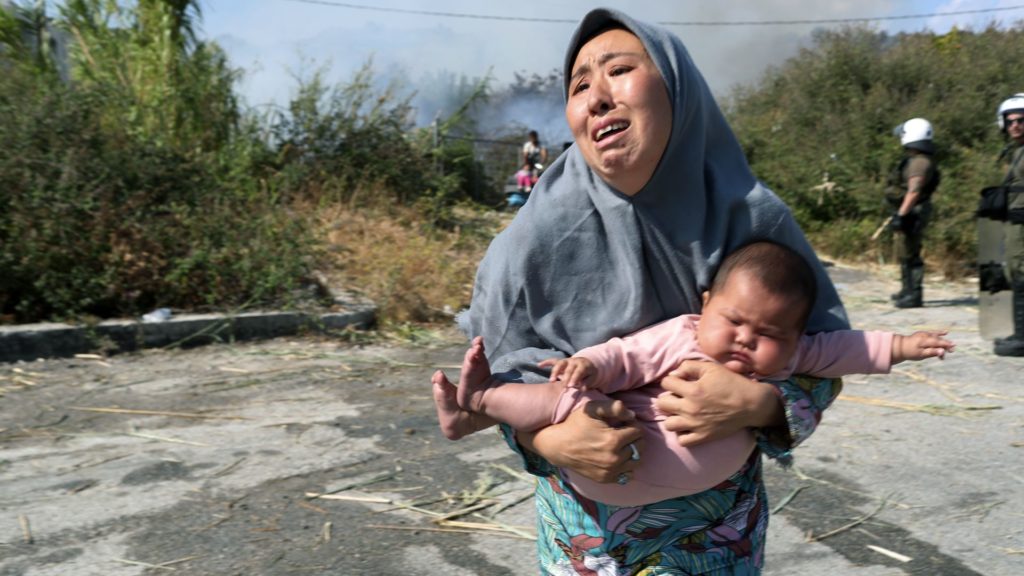 A migrant woman runs to avoid fire at Moria as it was burnt to the ground last week. Photo: AAP

German Chancellor Angela Merkel and her interior minister Horst Seehofer have agreed that Germany will take more than 1,500 migrants from five Greek islands; they are families and children recognised as most in need of protection.

But they won’t include anyone who was in the Moria camp on Lesvos, which burnt down last week in a conflagration allegedly started by six young men now held by Greek police as suspected arsonists.

The idea is to discourage refugees on other Greek islands from starting fires to obtain their release to the rest of Europe. Greece is adamant in its refusal to allow the Moria migrants to move to the Greek mainland.

Altogether Germany has committed to taking in 408 families with children who have obtained asylum status, bringing the total to 1,553. On top of that it is admitting 150 unaccompanied minors, out of a total of 400 to be spread among several EU countries.

The spokesman of the federal government, Steffen Seibert, has explained that 53 unaccompanied minors have already come to Germany, 243 children needing medical treatment and their core families are being processed. Altogether that made 1,000 people, of whom more than 500 were already here. “Accordingly the total number of people Germany is accepting from the Greek islands is about 2,750.”

Greece’s Prime Minister Kyriakos Mitsotakis said a new tent city for 8,000 residents being erected on the Lesvos coast would give the country a chance to reset policy on the handling of new arrivals.

On Thursday morning 170 Greek police, reinforced after the fire that totally gutted the camp, began fetching out people still in there. They were to move into the city of large tents. It’s been reported that police used force. “Everything’s proceeding peacefully,” reports Gerhard Trabert, a German doctor, at the location with an aid organisation. He estimated to a German news agency that thousands of refugees are still in and around the camp ruins.

READ MORE: Six arrested for arson over Moria fire as authorities mull over the next steps for migrants

Dr Trabert wants up to 2,000 patients at risk on Lesvos to be taken off. They need to be flown to Europe and be spread there, he urges.

“Germany must begin immediately by taking in 1,000 to 2,000 of the patients at risk,” he told the Mannheimer Morgen newspaper. “We can and we must now deliver that.“

The doctor added that chronically ill people are still in the area without medication against high blood pressure or diabetes. Many children and adults suffer skin diseases like scabes.

The fire left nearly 13,000 people shelterless, camping on roadsides and in woods, most without food and water for days. Many local people, once generous hosts, have turned hostile.

“We have to get the people into the new camp; if they stay on the streets it’s a hygiene bomb waiting to go off,” said Panagiotis Arkoumaneas, president of the National Public Health Organization (NPHO) of Greece. By Thursday 2,000 people had moved into the tents.

The migrants are calling for a place to resettle in other European countries and have been protesting against the new facility being erected.

Apart from Belgium, Germany is the only EU country willing to take in families from Moria. Refugee immigration is a red hot political issue in the country. It has been the main reason for the entry into all levels of political representation – local councils, state and federal parliaments – of the extreme rightwing Alternative for Germany (AfD) party and other neo-Nazi groups.

With federal elections due between between August and October next year, the rightwing agitation against new migrant intakes has already begun. Refugee accommodations and people out and about have been regularly attacked for years. Forty-six percent of people recently polled oppose Germany going it alone in allowing more migrants in, 62 per cent believe that more would be encouraged to try to get to northern Europe, nine percent want no more migrants at all.

Interior Minister Horst Seehofer, usually a hard-nosed opponent to more immigration, says he fully backs what’s been agreed. “Nobody pushed me,” he emphasised, “when I’m convinced something is not going to work, I don’t do it.”

Responding to demands by the opposition Greens, the Left Party, some co-governing social democrats and governing Conservatives to let in more refugees he said they should look to Italy, Malta, Spain and the Balkans, which also hold many refugees and then explain to Germans that “Germany is a place to stay for all these refugees”.

A home affairs spokesman of Chancellor Merkel’s Christian Democrats said the fact that Germany was practically the only EU state to take in these families now “is causing stomach aches to many in our party” but it was good that the most needy were now being helped.

At ‘ground level’, as it were, politicians and local people are willing to do much more than the government. At last count the mayors of 10 cities have written to Ms Merkel and Mr Seehofer that they’re ready to take in refugees. So have several of Germany’s 16 state governments and prominent members of Ms Merkel’s CDU party, including the chairman of the parliamentary foreign relations committee, Norbert Röttgen.
The letter was signed by the mayors of Bielefeld, Düsseldorf, Freiburg, Giessen, Göttingen, Hanover, Cologne, Krefeld, Oldenburg and Potsdam. They emphasise in it their readiness “to contribute to the accommodation in conditions worthy of human beings of those seeking safety in Europe. We are prepared to take in people from Moria to alleviate the humanitarian disaster”. Thousands of people have been demonstrating in the streets of the two biggest cities, Berlin and Hamburg, demanding that the Moria camp be disbanded.

Norbert Walter-Borjans, one of the two leaders of the Social Democrats (SPD), junior partners in Ms Merkel’s government, also demanded that more refugees from Greece be allowed into Germany. If it was up to the SPD, Mr Walter-Borjans said, states and cities could help unhindered to take in refugees. “But the CDU [Merkel] and CSU [Seehofer] are blocking.”

According to the UN refugee aid organisation, the UNHCR, 27,000 refugee migrants are in the east Aegean hotspots Lesvos, Chios, Samos, Kos and Leros. Almost half of them, 47 per cent, hail from Afghanistan. The next biggest group with 19 per cent are Syrians, six percent are from the Democratic Republic of Congo.

An analyst writing on his blog Achgut.com, Peter Grimm sees the Moria conflagration “dropping a new weapon in [Turkish] President Recep Tayyip Erdogan’s lap”. “He already exploited the five-yea-old ‘refugee crisis’ to push through demands to the EU and Germany. If now the transfer of migrants and asylum seekers from Greece to their target countries begins, Erdogan can … send masses of migrants stuck in

Turkish transit to storm the Greek border, this time both on land and at sea. Perhaps because of the superimposing everything Corona crisis many Europeans have forgotten the storm on the Greek border fence. If they haven’t, perhaps one can get an inkling of the debates triggered here after Moria.“
“This conflict could link into the much tenser relationship between Turkey and Greece [about territorial waters].”

By a Neos Kosmos reader in Germany