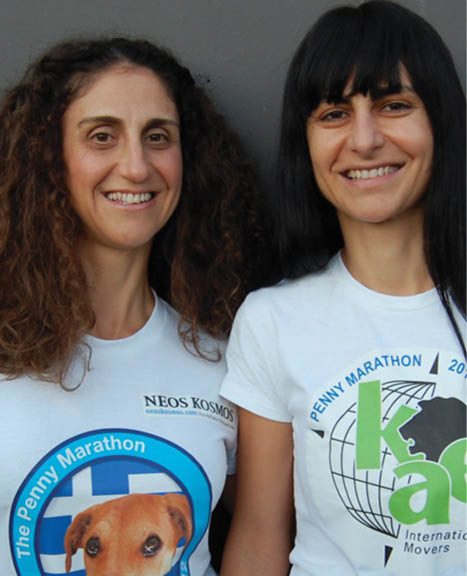 In July 2012, a small group of passionate animal lovers ran and cycled from Marathon to Athens in Greece on the hottest day of summer. The point was to raise awareness of the plight of stray, abused and neglected cats and dogs in Greece and beyond. Encouraged by the experience, the 42 kilometre run – known as The Penny Marathon – has become an annual event with teams now running in both Greece and Australia.
“We never expected people to get behind the marathon as much as they have,” says organiser Ellie Prodromou, from Sydney. “The idea to run the original route in Greece in summer was a way to get friends and family to donate a modest amount to help animal shelters pay some bills.”
Once word got out, Ellie and her sister, Pep, were joined on the day by other runners, as well as cyclists and a host of volunteers in Greece who wanted to contribute in some way.
The 2012 marathon was completed in 4.5 hours, and the team was invited to cross the finishing line at Kallimarmaro Stadium. Ending the run at the site of the modern Olympic Games was an unprecedented courtesy extended to the team – one that is only offered to runners of the official Athens Marathon.
In addition to raising awareness of adoption and neutering programs and educating the public about acceptable behaviour towards companion animals, The Penny Marathon is a way to honour the work of volunteers who step up – where inhumane or apathetic systems fail – to save the lives of these animals.
These issues hit home for Ellie when she worked as a journalist in Europe. “There are stray cats and dogs on every street corner in Greece, trying to get out of the cold or find some food. And beyond the indifference and neglect, there’s also the abuse and brutality,” she says.
But these cases are not unique to Greece. In Australia, even with its neutering and adoption programs, hundreds of thousands of pets are still killed ever year because they are unwanted and cannot find homes.
The Penny Marathon is named after a stray dog.
“Penny was a pint-sized little thing, living on her own in the streets of Athens. Sadly, her life was short lived, but this marathon is a way to remember her and all the others that didn’t really get a fair shot at life.”
In 2013, the Penny Marathon will take place on Sunday 14 July in Athens, Greece, and Sydney, Australia. It is supported by KAE International Movers, Lea’s World Travel and Neos Kosmos.
To donate, visit https://give.everydayhero.com/au/the-penny-marathon-2013. Donations of $50 go into a draw to win a brand new Apple iPad. For more information, visit The Penny Marathon on Facebook.