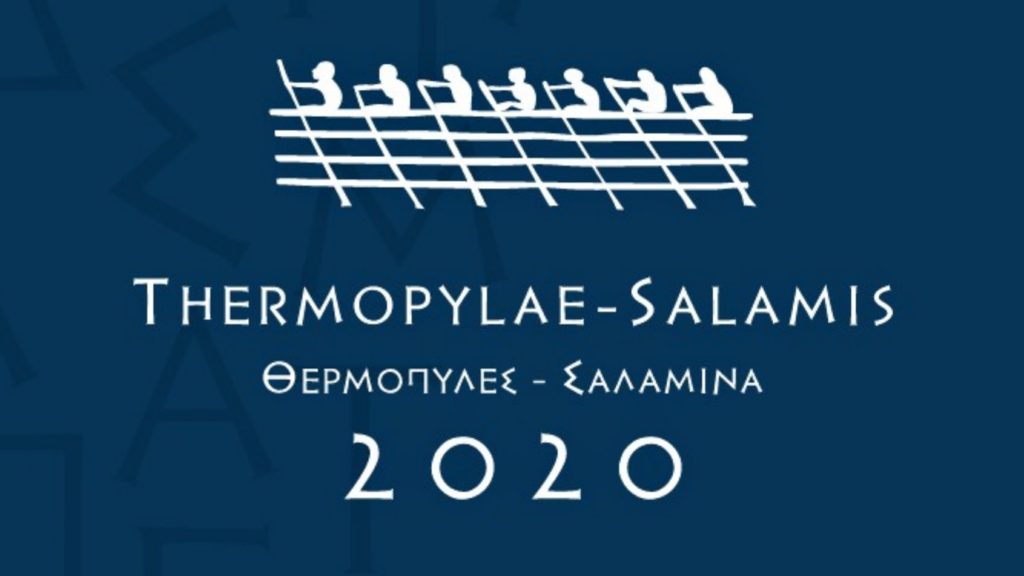 “Wait a minute,” Mehdi said and hurried to his shop’s counter. A few minutes he returned bearing a glass of steaming Persian, cardamom tea. “I’ve put a strand of saffron in it,” he exclaimed proudly. “Its how we have it in Iran.”

“That is awfully generous of you,” I gushed through the window, as I bowed in socially distant gratitude. “But what have I done to deserve this distinct honour?”

“You are the only Greek I’ve met in Australia who doesn’t immediately mention the Persian War after first meeting,” he replied.

And here I was thinking that I had earned my most refreshing brew because of my lengthy exposition of Sadegh Hedayat’s magisterial cry against political repression: “The Blind Owl,” wherein the main character contends that the presence of death annihilates all that is imaginary. In fact it was at the point where I had begun to mention that the word for owl in Farsi, “bouf” is the same as the Greek word μπούφος, that the gift of tea took place.

“Every time I meet a Greek, it’s either: “We beat you tyrants in the Persian War”, or “Alexander the Great conquered you,” Mehdi continued. “It’s as if it happened yesterday, not 2,500 years ago. I mean who knows where our ancestors were back then, and who rarely cares? It’s like an Italian meeting an Englishman and boasting about how Claudius conquered Britain. Ridiculous.”

“Almost as ridiculous as the Shah of Iran staging an ancient Persian pageant at Persepolis in the seventies,” I quipped. “It cost him his throne, you know.”

“That’s different,” Mehdi smiled. “We did that to ourselves, we didn’t impose it upon others. What was the first thing I asked you when you told me you were Greek?”

“You asked me if I had heard of Giorgos Dalaras,” I responded.

“Exactly. Music speaks an international language that unites people. I didn’t go on about how Alexander the Great burnt Persepolis or anything like that,” Mehdi complained. “But with you guys, it’s Marathon this, and Thermopylae that…. Do you know how many people have invaded Persia throughout its history? Hundreds. Scythians, Greeks, Romans, Indians, Arabs, Mongols, Turks… If we had to define ourselves against every single invader we would end up talking to no one.”

“So whenever you meet a Mongol, you don’t mention the devastation of Samarkand, or how the rivers became black from the ink of the books thrown therein?” I raised an eyebrow. “Isn’t the legend of Sohrab and Rustem predicated upon Persian resistance to Turkish invasion?”
“I’ve never met a Mongol in Australia,” Mehdi sighed. “And besides, everyone who came to Iran stayed. Our country is a conglomeration of tribes and peoples. Forty percent of our population is of Turkic background. Everyone contributes their own piece of the puzzle. But with you guys, there doesn’t seem to be any flexibility or acceptance of the other.”

I reflected upon this as I sipped my scalding hot chai. The Persian Wars are seminal in the construction of the Greek identity because many (but not all) Greek city states united for the first time to resist and repel foreign rule. There was a sense of kinship prior to the Persian invasion but it took the agency of an “other” to foster co-operation. Also, the Persians did not stay. They left. Similarly, although the Ottomans remained in Greece for over four hundred years, the foundation of the modern Greek identity is not only that they were overthrown but that their very presence was removed from the country. In a series of events culminating in the Treaty of Lausanne, with the exception of Western Thrace, which occupies the margins of the Greek social discourse, Turks living in Greece, like the Persians before them, did not stay. They left. The Romans, who conquered Greece by exploiting the divisions between Greek city states and exacerbating internecine strife by contrast, did not leave. Their colonists remained and gradually assimilated into the broader polity, as the Greco-Roman civilisation they engendered evolved into the Eastern Roman Empire.

Yet what is emphasized about that Empire in our historical narrative is that it was an albeit Christian, lineal descent of ancient Greece, inhabited by Greeks who for the one thousand years of the Empires’ existence, defended this bulwark of Hellenism from the inroads of the Persians, (every year in Orthodox churches we celebrate the defeat of the Persians by the Emperor Heraclius and his recovery of the True Cross), the Arabs, the Goths, the Avars, the Rus, the Bulgars, the Normans and the Turks. Our pride in our ancestors defeating the Italian invader and resisting the brutal German occupier rests upon those foundations. Consequently, our entire modern identity is, for these historical reasons, constructed around the concept not only of keeping others out but also delighting in doing so.

In contrast with Iran, where a succession of invaders settled permanently and had to be accommodated, there is no syncretism, no melding of cultures in our national mythology, which conflates time, as Mehdi so poignantly pointed out, so that a modern Greek can feel pride at the liberation of Greece from the Persians two and a half millennia ago, with an unconscious immediacy that confounds others that do not share that telescoped perspective of their own histories.

The fact that the Greece feels the need this year, to celebrate what it considers to be the 2,500th anniversary of the Battle of Thermopylae and the naval battle of Salamis illustrates the ontopathology inherent within the construction of our modern identity. Why stop there? Why not celebrate the 3,000th year anniversary of the great victory in the Trojan War, or 4,000th anniversary of the liberation of the Athenian youths from the clutches of the Minotaur? Why not celebrate the 10,000th year anniversary of the triumph of the Olympians over the old gods in the Titanomachy? Good looking youths bearing sickles could parade the streets symbolically castrating members of the gerontocracy. Indeed, the whole affair reminds one of Roman Emperor Caligula’s celebration of his supposed conquest of Poseidon by ordering his soldiers to gather sea shells from the shore, as war booty. Acts replete with symbolism, but of little practical effect. And why does it evade everyone’s attention, that the first battle of Salamis, in Cyprus, was an unmitigated disaster of the Greeks?

For some reason, Greece does not feel the need to construct anniversaries commemorating those aspects of our culture and history that have been of immense benefit to mankind and have thus justly been appropriated as the basis of modern civilization: the invention of democracy, the theatre, philosophy and the development of scientific inquiry. One could argue that had not the Persians been defeated, these benefits would not have been available to the rest of the world as Greek civilization would have crumbled under the crushing Persian yoke but the argument is specious: the Persian polity, even back then, was pluralistic and benign, allowing its subject peoples to preserve their culture and modes of administration, provided of course that they deferred to the local satrap and paid their tribute. Indeed, there is no evidence to suggest that in Ionia, where Persian rule came first and where Greek philosophy was first invented, that the Persian yoke in any way inhibited its continued development. What we do know however, is that after the Persian Wars, right up until the conquests of Alexander, Greek city states allied themselves with or subjected themselves to Persia, in order to protect themselves from other Greek city states, with the “Great King” of Persia seen as the ultimate referee in all Greek city state squabbles.

All this is lost however in the afterglow of the immortal words of the Spartan emissaries, Sperthias and Boulis to Hydarnes, the Persian commander of Ionia, when he enjoined them to submit to Persian rule: “You offer us this advice only because you do not have a fair and proper perspective. For you counsel us based on your experience of only one way of life, but you have had no experience of the other: you know well how to be a slave but have not yet experienced freedom, nor have you felt whether it is sweet or not. But if you could try freedom, you would advise us to fight for it, and not only with spears, but with axes!”

The irony of course, that the Spartans also were approaching their negotiation based on their experience of “only one way of life,” should not be lost upon us. Nor indeed that subsequently, they entered into a treaty with Persia in 412BC, surrendering all of Greece outside the Peloponnese. In a subsequent treaty of 411BC, Sparta gave up all claims for the freedom of the Greek city states in Asia. Freedom therefore, however precious, is a negotiable commodity after all. Further, it was the Persian satrap Mardonius who reinstated democratic forms of self-governance in the cities of Ionia. And of course, where did the great Themistocles, architect of the Persian defeat at Salamis end up? Working for the Persians, as satrap of Magnesia. V is for venal, as well as victory.

Mehdi pierced the shield wall of my reverie with the following question: “Did you know that Vassilis Koukalani, (who is apparently an actor in Greece), has an Iranian father?”

“No, I didn’t,” I countered, offering instead: “Did you know that Shah Ismail, founder of the Persian Safavid dynasty was the grandson of the Emperor John IV of Trapezounta?”

“No,” he replied. “But did you know that Mithridates of Pontus was actually Persian?”

“Did you know that Drypetina, his daughter, had a double row of teeth?”

“I think her mother was Greek,” Mehdi laughed.

When COVID is over, Mehdi has promised to create and purvey at his café, a Salamis Special latte, a fulsome brew containing saffron and ground pistachio, in honour of my people’s victory over his at that hallowed island. In consideration of him so doing, I have promised to eat a Persepolis Penitential, that is a traditional Khoresht-e Fesenjan, a walnut and pomegranate stew of his own concoction, by means of apologizing for Alexander the Great’s burning of the palace at Persepolis and acknowledging the superiority of Persian cuisine. And therein shall be the peace.