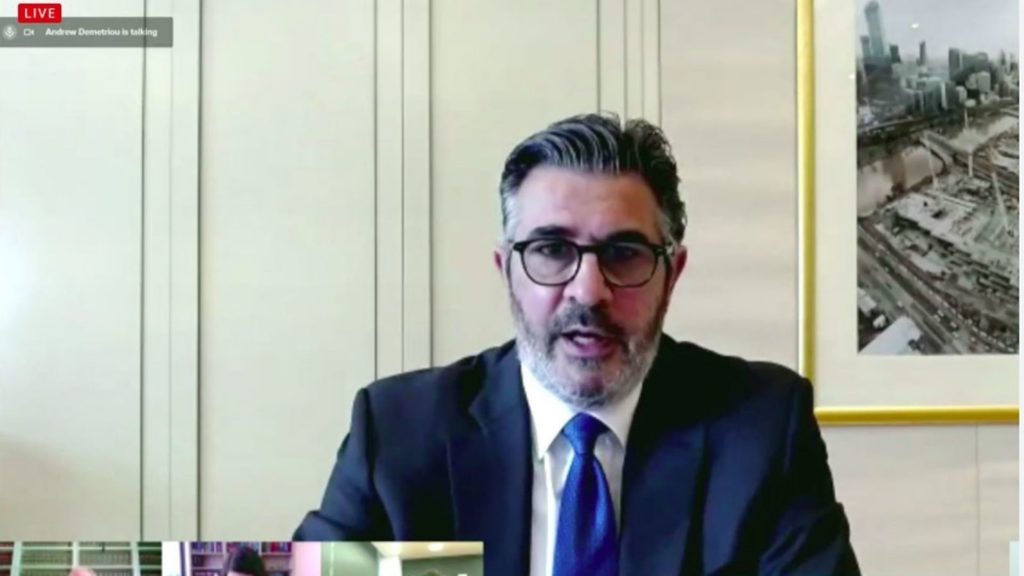 Crown Resorts director and former AFL boss Andrew Demetriou, accused of dishonesty in evidence he gave to an inquiry on the casino empire, has admitted he had written notes in front of him when giving evidence remotely on Monday. He read from the notes when answering questions on potential money laundering at Crown, however he denied he gave other evidence based on notes.

Grilled about inaccuracies in his evidence and his relationship with Crown stakeholder James Packer, the group’s biggest shareholder, he was asked about his actions as part of an inquiry called by the NSW Independent Liquor and Gaming Authority following a series of publications which appeared in the media. The inquiry is investigating whether Crown and its associates are fit to hold a license for a new casino at Barangaroo in Sydney due to open at the end of the year.

Mr Demetriou’s independence as a Crown director has been called into question after it was revealed he told Mr Packer in an email that he was committed to “serving the best interests of Crown, and, most importantly, you”.

At the inquiry, Mr Demetriou said a note contained information about the term “culture”, downloaded from the internet. He said he did not read from it during evidence.

Scott Aspinall, counsel assisting the commission said, “You wrote them down because you couldn’t remember them without being reminded.”

“You weren’t acting with honesty and integrity, were you?” Mr Aspinall said.

Aspinall played footage of Mr Demetriou’s evidence on Monday where he looked down while giving evidence.

Mr Demetriou said “I suspect I looked down for much of the day”.

Later, Mr Demetriou admitted that evidence he gave on Monday about 100 to 102 suspicious transactions at two Crown subsidiaries through which high-roller payments were funnelled into Riverbank and Southbank was wrong.

Mr Demetriou’s notes had referred to 102 instances, however each instance involved customers making multiple deposits, each under the $10,000 threshold. Mr Aspinall put it that meant there were 204 transactions, to which Mr Demetriou agreed.

An exasperated Commissioner Patricia Bergin at one point exclaimed: “Oh Mr Demetriou, why did you do it?”