New Research on the Greek Resistance in the Second World War Resistance fighters as displayed on the cover of Spyros Tsoutsoumpis book. Photo: “A History of the Greek Resistance in the Second World War”

The popular resistance to the Axis occupation is one of the most important aspects of Greece’s experience of the Second World War. Emerging in northern Greece almost as soon as the region was overrun by the German forces, the resistance would spread across the mainland and Greece’s Islands. It disrupted the Axis occupation, committed important acts of sabotage, aided countless Allied soldiers on the run as well as civilians being sought by the occupiers, and liberated large swathes of the country. But their resistance gave rise to German retribution with their terrible concept of collective responsibility, exacted on both the resistance and innocent civilians. The memorials to the destruction of villages and their inhabitants across Greece stand testimony to this suffering to this day.

Yet the history of the resistance – both in Greece and across Europe – has attracted little academic study in comparison with the volume of books on the military and other aspects of the Second World War. With regard to historical analysis of the role of the Greek resistance, this has also long been subject to the vagaries of political polemic, with assessments influenced by attitudes to the subsequent civil war. In recent years, many Greek historians have finally been able to apply proper historical research to the subject and others associated with the war, including the Holocaust in Greece and the extent of collaboration.

This new study of the Greek resistance by Dr Spyros Tsoutsoumpis’ is part of this new wave. The author is a military historian with an interest in the history of paramilitary violence, nationalism and irregular warfare in the Ottoman and post-Ottoman Balkans. He obtained his Doctorate in military history in 2012 from Manchester University, has held a number of academic positions across Europe and has published many academic articles on these topics. 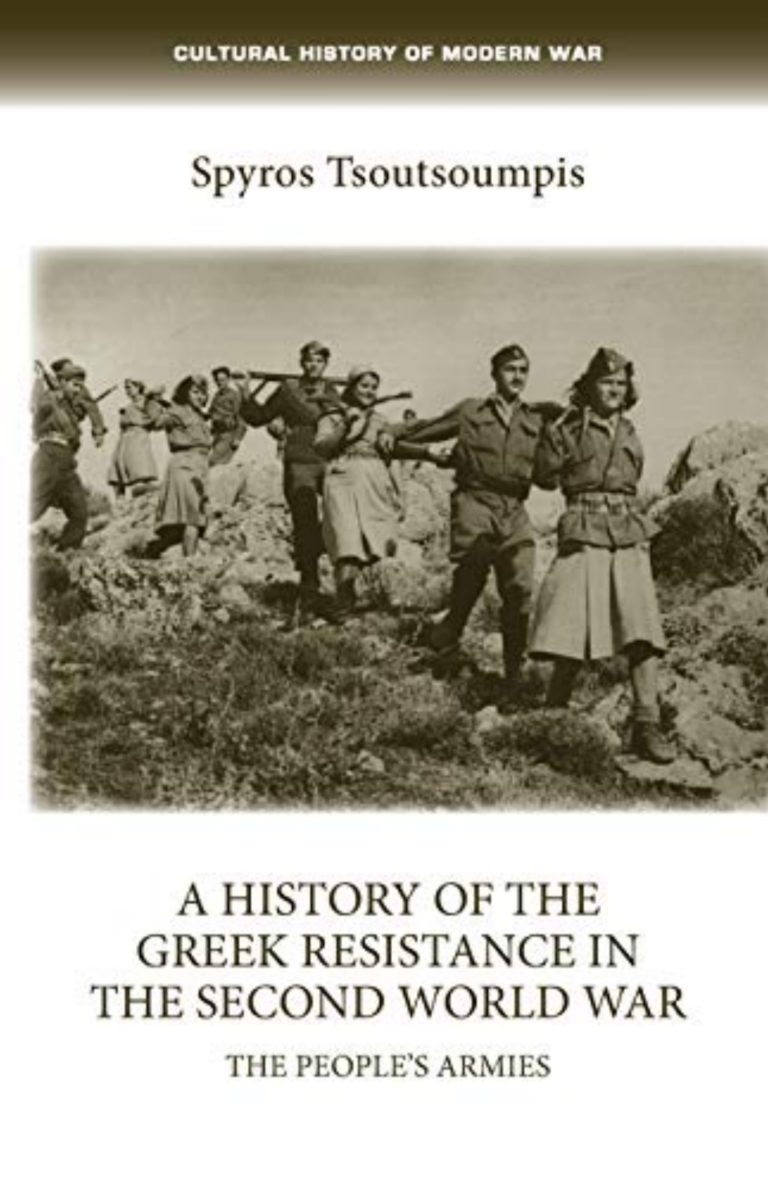 The book is a detailed study of the operations of ELAS and EDES in the rural areas of Greece, focusing on the rank and file of the organisations rather than their leaderships or military engagements. The study is based on the archival evidence of the resistance itself as well as other sources. He particularly points to Red Cross reports as providing important insights to the situation and everyday life in the liberated areas. One of the attractions of the book is its use of new oral testimonies of rank and file resistance members, many of them collected during 2006-8 in Epirus region.

What emerges from many of the testimonies is the role of the reality of rural village life in the history of the resistance. For many the village appears to have been the boundary of life, the prism through which they viewed the war. As the author writes, the war is often remembered in terms of what took place in a village, of rivalries between families and of material needs, with broader issues playing issues playing a secondary role.

The study makes a number of interesting conclusions. While most rural resistance members asserted that their decision to join was theirs along, political ideology was less significant in this decision that for leaders or militants and especially those in urban areas. His research suggests that local dynamics, culture and kinship ties played more important roles in their recruitment. The lesser role of ideology is reinforced by evidence of defections from ELAS to EDES and vice versa, with individuals changing allegiances from one to the other in search of revenge, rewards and security, a process that increased with the advent of the Civil War.

One chapter deals with the effect of the everyday life of the fighters, with its break from normal life as well as separation from home and family. As the months and years wore on they had to learn how to survive in the countryside, relate to civilian populations and conduct military operations in a harsh and forbidding environment. While the harshness of irregular warfare stunned many guerrillas, this initial feeling was largely overcome, replaced by a particular “masculinist culture” celebrating endurance, physical strength and violence. He also documents the role of religion and the supernatural in providing solace and respite in an increasingly violent and desperate environment.

The author also found that despite the efforts of their respective leaderships, political ideology played less of a role in maintaining the morale of the resistance than has hitherto been asserted. Group ties, local leadership and ideas of honour were more important in helping the volunteers deal with the exertions of combat and everyday life in the field. And as they faced increasingly determined retaliation from German and Greek collaborationist forces, military necessity resulted in increasingly stern disciplinary measures being adopted by the resistance to stem desertions.

Finally, he looks at the situation in the liberated rural zones during the war, assessing the conflicts that existed between the guerrillas and civilians over definitions of justice and taxation, corruption amongst local governing bodies and the inability of the resistance to protect civilians from brutal German retribution (such as the massacre of civilians at Kommeno in Epirus). In the authors view the conflict between the resistance groups – and their combat with both German and Greek collaborationist forces – transformed rural Greece into a “Hobbesian dystopia” where weapons were used to settle scores, persecute opponents and exterminate political rivals. In this environment, rural civilians often found themselves in a “grey zone” where some resistance actions were supported and others opposed, with civilian autonomy expressed in foot-dragging, bribery and sabotage. He concludes that civilian supporters of the resistance were similarly largely motivated by survival rather than ideology, with their allegiance to kin and locality.

Many who read this article will have their own stories to tell. A few years ago I had the honour to interview an elderly lady in her home in Athens, who as a young woman in Kalamata made the decision to join the resistance soon after the Germans marched into the town in late April 1941. As she began to tell me her story, her eyes lit up and I witnessed the return of the vibrancy of her youth.

She witnessed the brutality of the occupation almost from the start as German soldiers executed some surrendered Allied soldiers near her father’s bakery. She told me of how the resistance began with the hiding and distribution of food to locals, a serious offence under the Germans, and soon developing into more active resistance. No longer safe in Kalamata, she escaped into the Mani and continued to fight. She survived the war but like many others in the resistance would face imprisonment and worse in the years after the war. She scoffed at being called brave or a leader, insisting she was only doing what was right.

When I think of the resistance, I think of this lady who as a young girl had shown such bravery in the face of terror. It was humbling to talk to her. I hope one day to be able to bring the video of my interview to a wider public.

Jim Claven is a trained historian, holding Bachelor and Masters degrees from Monash University, a freelance writer and Secretary of the Lemnos Gallipoli Commemorative Committee. He has been researching Greece’s role across both world wars, and its Anzac connection and is the author of Lemnos & Gallipoli Revealed: A Pictorial History of the Anzacs in the Aegean 1915-16. He has written a number of articles on the German occupation and resistance for Neos Kosmos, including that concerning the Island of Lemnos. He can be contacted at jimclaven@yahoo.com.au.