HMS Argonaut and the Lost Graveyard of Lemnos 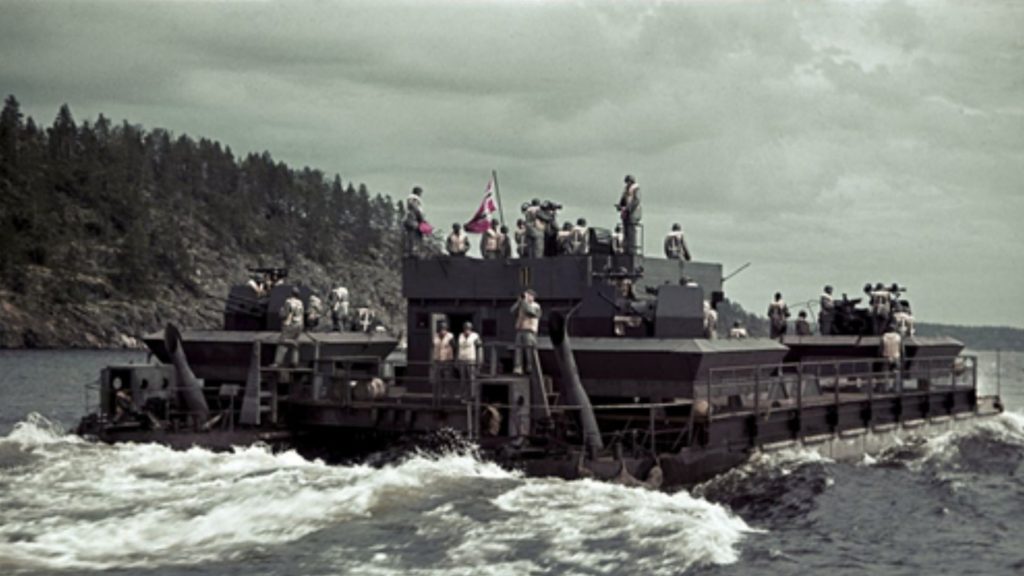 A German Siebel Ferry, most probably the model used by the Germans at Lemnos in October 1944. This one is photographed on Lake Ladoga in 1942. Source: Finnish Military Picture Archive, SA-Kuva

I’ve stood on the southern coast of Lemnos gazing into the calm blue waters of the Aegean which stretch before you. From time immemorial these waters have taken ships to and from Gallipoli, to the Greek mainland and to harbours across the Mediterranean and beyond. My research has confirmed that somewhere in these waters lies the graveyard of many – potentially hundreds of soldiers – and their vessels, sent to a watery grave in the final part of the Lemnos’ liberation in the Second World War. In October we commemorate OXI Day and the liberation of Lemnos from Ottoman rule in 1912. But this October also marks the 76th anniversary of that naval battle in the waters off Lemnos. This is the story of that lost graveyard in the waters off Lemnos, which remains waiting to be found.

Situated in the northern Aegean, close to the Dardanelles and on the sea route from Salonika to the eastern Mediterranean, Lemnos has played an important part in the naval history of the region.
It emerges in the great voyages of Greece’s mythic past – where both Jason and Odysseus landed on their mythic voyages of discovery for the former and to war for the latter. From these myths it would emerge in history as part of the Delian League, colonised by Athens. After the fall of Byzantine Empire, Lemnos with the help of the Venetian fleet would resist Ottoman rule. In the 18th century the fleet of Catherine the Great of Russia came to Lemnos in its war with the Ottoman Empire.

The Hellenic Navy’s victory at the battle of Lemnos in 1912 would defeat the Ottoman Navy and confirm the liberation of Lemnos and the surrounding islands. During the First World War Lemnos would be the Allied advanced base for the Gallipoli campaign, its Mudros Bay providing safe harbour for hundreds of Allied ships as they came and went to and from Gallipoli and beyond. Lemnos would remain a naval base throughout the war and Mudros Bay would be the location and give its name to the signing of the Armistice which ended the war. And the waters surrounding Lemnos were a grave for the many Allied soldiers and sailors who were buried at sea or who were killed or drowned as their ships were sunk during the war.

War would come again to Lemnos – and all Greece – just over 20 years alter with German-led Axis invasion of the country. I have written previously of the story of Lemnos’ occupation by German forces with their arrival on Anzac Day 1941. The occupation would last until October 1944, when the Germans planned their withdrawal as the Greek resistance and an Allied military and naval force closed in. As the war drew to a close, the German troops on Lemnos withdrew to Mudros, destroying bridges as they went across the island. At Mudros, they undertook a series of demolitions and began to board the various vessels they had assembled to depart the Island for the mainland, comprising a Siebel ferry, a large fuel lighter and a number of caique boats. The Siebel ferries were a shallow draft catamaran-style landing craft, of sturdy construction and was often heavily armed with artillery.

Now would commence the final battle to liberate Lemnos, which would unfold at Mudros on 17th October and end with a naval engagement the next day. Recently I discovered a detailed account of how the liberation unfolded, written by the Second-in-Command of the Allied force, Scots-born Major Jock Lapraik.

The final battle to liberate Lemnos began on Tuesday 17th October, with the Allied forces engaging the German and Italian forces as they attempted to escape. The Allied force was led by the British Brigadier Turnbull and comprised British and Greek soldiers, the latter of the Greek Sacred Squadron led by their commander Colonel Alkiviadis Bourdaras. The engagement would see Mudros town subject to explosions as the Axis carried out demolitions, followed by fighting at the harbour and into the town as the Allied force sought to stop the evacuation. As Major Lapraik writes “all along the waterfront … developed a series of individual gun battles.”

The attack on the departing force had met with some success. Those Axis troops that had not boarded their escape vessels were engaged and overcome, with the loss of one Allied soldier (a Greek officer) and seven British wounded. A number of Italian troops disembarked and surrendered. Newspaper reports from the time report that 400 enemy prisoners were captured at Mudros.

Nevertheless the Allied forces on land had failed to halt the departure of the remaining Axis force, possibly numbering in the hundreds, who sailed out of Mudros Bay at night. The escaping flotilla comprised the Siebel ferry, the fuel lighter and possibly a number of caique boats. Major Lapraik writes that the commander of departing force was none other than a cousin of the famous Baron Manfred Von Richthofen – the Red Baron – the German First World War flying ace, shot down by Australian soldiers on the Western Front. Our “Lemnos” Richtofen was on board the Siebel Ferry as it sailed out of Mudros Bay into the dangerous waters of the Aegean. 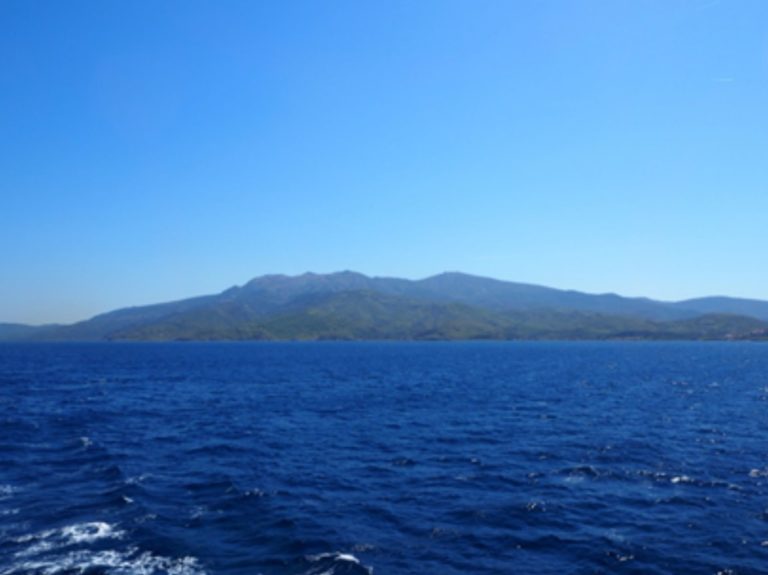 But their escape from Mudros Bay would be short-lived. Sometime during the next day – the 18th October– the final chapter in the liberation of Lemnos would be written. For the Axis ships sailed into the wake of the British Royal Navy cruiser, the HMS Argonaut, whose crest featured a Greek warrior holding a golden fleece and shield. An auspicious name given Lemnos’ connection to Jason and the Argonauts – who had been sent into the Aegean to assist in the liberation of Greece.

One of the sailors aboard the Argonaut has left us an account of the sea battle. He writes that the Germans foolishly “had the cheek to open fire” on the British warship, which responded with fire and sank the German ships, throwing their crew and passengers into the Aegean. It would appear that all the German ships were probably sunk, although the same sailor writes of “a few caiques” and Major Lapraik “the Siebel ferry.” And while a number were rescued from the sea – including “a lady “whose nationality is not mentioned – Major Lapraik goes on to write that a number were drowned, including no doubt the commander of the ferry, Von Richthofen. As these ships sank into the waters of Lemnos, so ended the German occupation of Lemnos.

Not only do we not know the exact numbers of German (and possibly Italian) troops drowned but we also don’t know the exact location of this final naval engagement itself. Major Lapraik records that it took place “outside Mudros Bay” and an Australian newspaper report of the battle from 23rd October 1944 – in the Kalgoorlie Miner no less – states that it had taken place “near Mudros.” Melbourne’s Argus newspaper could now report that the “the historic Lemnos Island” – alluding to its Anzac connection – had now been liberated and the German occupation was over.

What is certain is that the final liberation of Lemnos took place with this naval engagement between these German ships and HMS Argonaut, somewhere outside Mudros Bay and that a substantial number of German troops were killed or drowned, possibly including the cousin of the famed Red Baron. And how fortuitous that the liberation of Lemnos and the defeat of the last occupiers of the island would be achieved by the action of a naval vessel named after the mythic Greek hero, Jason and his Argonauts. The sailors of the modern Argonaut had come to Lemnos in her hour of need and had played a key role in her redemption.

This important battle in the modern history of Lemnos and the story of Greece’s liberation should be remembered – both the battle fought at Mudros itself on 17th October and the subsequent naval battle on 18th October. Together they represent the final page in a dark period in Lemnos’ history.

For me this final naval battle and its casualties should be especially remembered. It was here that a warship named after Jason and the Argonauts defeated the last of the German occupiers of Lemnos. And it was here in the waters near Lemnos that a naval graveyard exists, containing both the physical and human remains of the engagement. It also represents one of the last Allied naval victories in the Aegean and it represents the final act in Lemnos occupation in the Second World War.

I look forward to the day when these vessels and the graveyard of those who died at sea are finally located and respected. And I believe that there should be a commemorative memorial to this, the last naval battle of Lemnos, fought on 18th October 1944, honouring the sailors of the HMS Argonaut and those who died at sea. I have been in contact with the Hellenic Navy regarding this important naval engagement and the need to identify this war grave and honour its war dead. Watch this space. Lest we forget.

Jim Claven is a trained historian, freelance writer and author of Lemnos & Gallipoli Revealed. Secretary of the Lemnos Gallipoli Commemorative Committee, Jim has been researching the Hellenic link to Anzac across both world wars. Two of his previous articles for Neos Kosmos dealt with the story of Lemnos in the Second World, its occupation and liberation. Readers seeking more information should read Major Lapraik’s Memorandum on Chios, Aristides Tsotroudis’ The German Occupation of Lemnos 1941-44 and the 23rd October 1944 editions of the Kalgoorlie Miner and the Argus newspapers. He can be contacted at jimclaven@yahoo.com.au.