Aristotelis Sarrikostas, the Associated Press photographer who captured the spirit of the Polytechnic Uprising 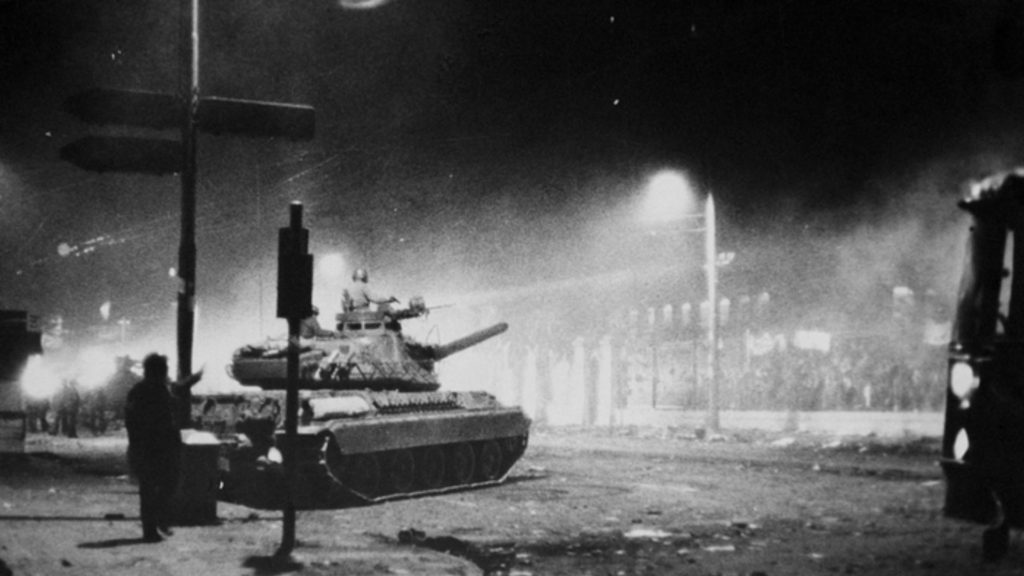 It has been 47 years since the Polytechnic uprising and a plethora of articles, opinion pieces, books have been written about the events which took place at 3am, 17 November, 1973, when a tank bulldozed into the Athens Polytechnic plowing students who had barricaded themselves inside.

Aristotelis Sarrikostas, one of the foremost photojournalists of Associated Press, immortalised moments from the historic event.

“I was the only photojournalist there on that night at the Polytechnic and I feel very proud that I was able to capture that event which was destined to mark the modern history of Greece, and even more importantly, for Greeks and foreigners to learn that Freedom is not Given but that Freedom is conquered,” Mr Sarris (Sarrikostas), as he is known to his non-Greek colleagues, told Neos Kosmos.

Mr Sarris was awarded the Golden Cross of the Order of Honor by President Karolos Papoulias in 2008 for that historic moment which he caught on camera at risk of his own life.

It was not an easy endeavour. “In those five hours when I found myself in front of the Polytechnic that night, from 16-17 November, 1973, despite being inside, surrounded by police and fascist inciters, despite the danger of being arrested, I was able to perform my duty and execute this unique mission of every professional photojournalist: to photograph the event, so that they (thousands) unable to be there could see,” Mr Sarris said.

There were many technical difficulties, with cameras in those days not having the same capabilities as the ones today, especially at night. “With the light of the street lights on Patission and Stournari streets and the help of the tank lights, I was able to photograph, without using flash, the emotional and unforgettable moments of the trapped students. Hanging on to columns at the entrance and behind the gates, from windows and walls of the Polytechnic, they had banners with slogans, and they called out to the soldiers on the tanks and the pavement across: ‘We are Greeks’, ‘We are unarmed’, ‘Come with us’, and much more,” Mr Sarris said, remembering also the pirate radio station concurrently transmitting songs by Mikis Theodorakis.

“It was very touching and even greater because I was unable to show my feelings… and that all continued until 2.55am in the morning,” he said, five minutes to the moment when tanks entered the Athens Polytechnic.

“Following the shock (of the tanks entering) – I was not expecting it – I went to the centre of Patission Street where I had a better view. I took three reels and two policemen immediately came to me. They tried to hit my head. I escaped by zig-zagging and reached my office to send my photographs to the Associated Press in New York. From there they were sent round the world, to show exactly what had happened that night at the Polytechnic which was refuted by Stylianos Pattakos, foreign minister of the junta, who said the next day that the slightest had not occured at the Polytechnic that night… My photographs were testimony that could not be denied,” he said.

READ MORE: A resilient spirit: David Krasnostein and the art of the perennial

Mr Sarrikostas had many colleagues around the world. “Each one had their own opinion regarding the political situation in my country. Most avoided discussing the issue,” he said, but his Spanis colleague and friend Santiago Lion was the exception. “In a discussion we had around 1972, he said the junta may stay forever in Greece, and he received the response that ‘Greece taught democracy’, and was not Franco’s Spain, and that we would free ourselves of the colonel as was the case two years later. Following that discussion, he now gives me his hand and embraces me whenever we meet.”

His position as a photographer of Associated Press was viewed with prestige in Greece, but his personality also played a role. “Due to AP, I had better treatment than other colleagues who worked at newspapers and magazines around Athens. What helped me be accepted in the king’s palaces but also by governments, by all politicians in all parties, I think, was my behaviour which I took care to be impeccable until the last day of my career,” he said.

He was welcomed by the junta and had access to dictator George Papadopoulos’ office and proved he was a professional photoreporter regardless of situation. Many of his colleagues said he was of the dictatorship due to his free access, but he was also called “royalist”, “Papandreou supporter”, “Karamanli supporter” and affiliated with any party that ever existed in Greece during his career. His lens has photographed thousands of personalities, artists, athletes and kings.

Adapted from a larger article in the Greek section of Neos Kosmos.