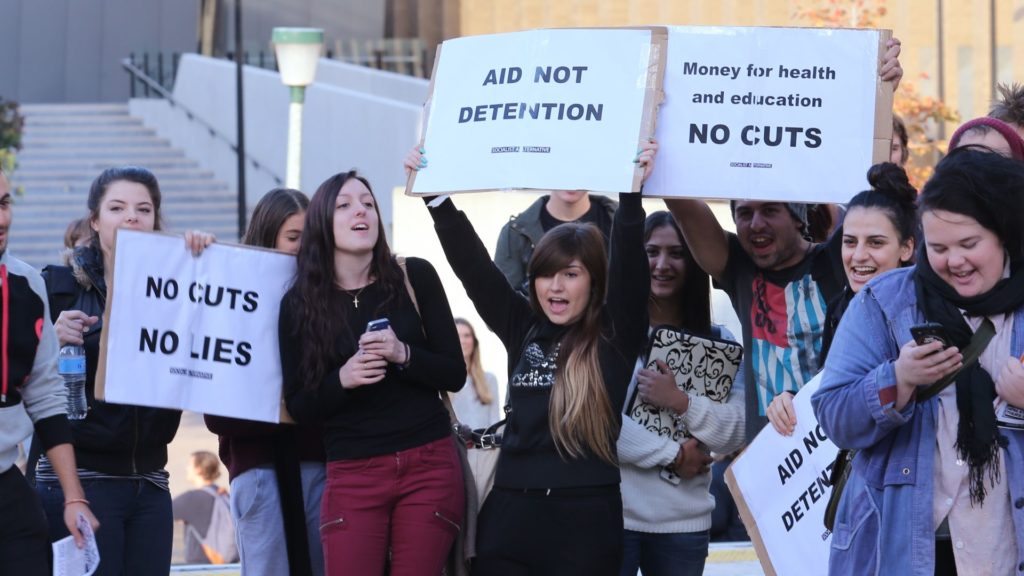 Government can play a pivotal role in keeping languages alive, by setting multicultural policies with a vision which drives the future.

La Trobe University’s administration announced the consultation process for the termination of Greek language studies from 11-25 November, and we reached out to politicians to gauge the feeling among policy makers at state and federal levels. The good news is everyone appreciates the importance of learning Greek. The bad news is this may not be enough to save it.

Federal Education Minister Dan Tehan told Neos Kosmos that the Liberal government is a “proud supporter of multicultural Australia” and showcased $298.5 million in the budget for additional domestic university places, estimating that 30,000 more Australians will have the opportunity to go to university next year. “Through our Job-ready Graduates reforms, students who study a language like modern Greek, will see the cost of their degree reduced by 46 per cent,” he said, while also showcasing $27.5 million for the Early Languages Australia (ELLA) program, $314.7 billion to 2029 to improve student outcomes, and $915,000 to Community Languages Australia to continue working with Australia’s community language schools “including providing professional developments for teachers”.

Acting Minister for Immigration Citizenship, Migrant Services and Multicultural Affairs Alan Tudge said the $10 million community language grants program covering a total of 356 community language schools will “strengthen social cohesion”. “Dual language skills give young Australians a competitive edge in an increasingly globalised workforce and build our capacity as a nation to engage openly and confidently with the rest of the world,” Mr Tudge said.

READ MORE: La Trobe University says, “We’ll get back to you”

Federal Labor politicians Andrew Giles MP, Shadow Minister for Multicultural Affairs, Shadow Assistant Minister for Skills and Aged Care Ged Kearney, Peter Khalil MP and Maria Vamvakinou MP, a former teacher who feels passionately about the current situation, released a statement on the proposed termination of Greek studies after 38 years, linking it directly to cuts by the Morrison Government which fail to properly support universities during the COVID-19 pandemic.

Victorian State Parliamentarians Kat Theophanous MP, Steve Dimopoulos MP, Nick Staikos MP and Lee Tarlamis MP have called on La Trobe University to reconsider its move to discontinue Modern Greek language studies, with Ms Theophanous present at Monday night’s urgent community meeting to show her support. They said they would be writing directly to the university to put the case forward for the ongoing value of the program.

“This would be a huge loss for the Greek and Cypriot community and have ongoing ramifications for the many sectors which rely on high-level Greek language skills, including aged care, social services, translation services and education,” Ms Theophanous said.

Mr Dimopoulos said, “If we are serious about promoting diversity and multiculturalism, we must continue to actively invest in and protect language learning as a cultural asset. Once it is gone, it is very difficult to bring it back.”

The benefits of the language, with the “etymological basis for science, medicine, philosophy and other subjects – losing this knowledge base is a loss for all of us,” was stressed by Mr Staikos.

Mr Tarlamis pointed to the “multi-million dollar industry (in Victoria)  through trade and service links with Greece and Cyprus. This is built on our strong cultural connections and the Greek language is an inextricable part of that.”

A Victorian government spokesperson told Neos Kosmos that the state government is doing all it can to make sure Victorian students have access to world-class K-12 programs. “We’ll continue working closely with universities to monitor the pipeline of teachers in languages and other subjects where there are skill shortages,” he said. “While university courses are a matter for them, by example, we continue to promote a diverse range of languages (70) to be taught in Victorian schools.”

In 2019 more than 2,000 students studied Greek in Victorian government primary schools, secondary schools and at the Victorian School of Languages, making it the 13th most popular language of the 40 languages available in the state.

“Language allows us to experience new things and link us with people and cultures that we would otherwise not be able to do so, contributing to social cohesiveness through better communications and understanding,” Mr Angus told Neos Kosmos, adding the Liberal Nationals commitment to supporting state language education.

Regardless of political persuasion or government tier, everyone agrees that languages should be supported with suggested and outright support of Greek remaining at La Trobe. Despite this flow of powerful support the Greek studies program at La Trobe University continues to be in dire straits.