Skapetis on the rise in the UK 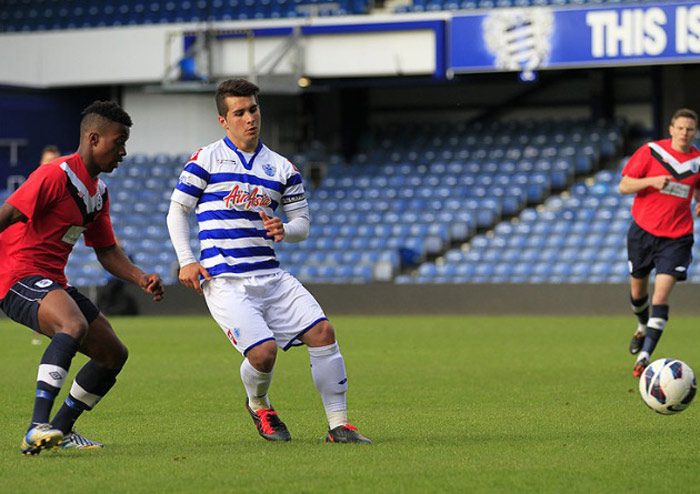 As Australia basks in the glory of an unprecedented third consecutive World Cup berth, there’s an unassuming youngster brimming with a desire to emulate his older compatriots.

Will there be a surprise introduction into the Socceroos’ squad come June next year?

No, it’s far too early to suggest a virtual unknown in the nation’s football stocks could orchestrate such a meteoric rise in time for Rio.

But take note, Melbourne-born Peter Skapetis is progressing at a rapid rate. Skapetis signed a professional contract with Queens Park Rangers on his 17th birthday, after a six-month trial period at Birmingham City.

Since the move, he’s enjoyed a rich vein of form for the west-London outfit. Twenty-three goals in 26 appearances for the club at Under-18 and Under-21 level is a significant return.

“I’m a firm believer in remaining focused from the first minute to the last,” Skapetis said.

With mental toughness beyond his years, it’s easy to see why the striker has been so impressive.

Whilst it’s a role of responsibility he’s delighted to undertake, Skapetis believes his actions speak louder than words. “I’m vocal, although I’d rather lead by example on the pitch through scoring a goal, making a run or taking a shot,” he said.

In the semi-final he scored a dramatic last-gasp winner in the 91st minute against Leeds United.

And again, in the final he struck a sweet penalty kick to ensure a 1-0 victory for Rs. Skapetis was rewarded for his efforts with a new one-year deal and the young man is determined to use it as a catalyst for first-team football.

“At the moment I just want to establish myself as a QPR senior team player, and I’m hoping I can help the club’s promotion push,” he said.

It’s naturally a difficult time to move away from home and try to adapt to a different environment and lifestyle. However, the ex-South Melbourne junior wouldn’t have it any other way.

“Obviously it’s difficult to leave home, but you get into your routine, start training and playing, which takes your mind off a lot of things,” he said. “But I really do love London, it’s an unbelievable city.”

Skapetis was fortunate enough to have his parents and brother move to England to support his career, and it’s something he appreciates deeply.

“Mum moved over a year ago, dad and my brother eight months ago,” he said. “My family is always there with me, they’re always helping me improve and I’m very grateful for that.”

Besides his immediate family, Skapetis is like any normal teenager who enjoys spare time at the movies, out to dinner or shopping in central London with friends.

Life off the pitch is something the level-headed star values highly.

“I think it’s really important, when you’re constantly in that football environment, that you break away,” he said. “I personally like to occupy my time with TV, family, friends, movies and playing FIFA.”

A life-long Liverpool fan, now with a strong affection for the Rs, he’s a real admirer of some of the game’s current stars.

“My favourite footballers are Luis Suarez, Cristiano Ronaldo and Sergio Aguero,” he said. “I like to look at these players in my position and to try and model my game around them.”

Skapetis adopts a similarly tenacious approach that all of the aforementioned trio possess.

“If you look at stats for goals to games ratio, you’ll find a lot of goals are scored early or late in halves,” he said. “Defenders might switch off and allow you an opportunity.”

And he’s a firm believer he’s in the best country to improve his game.

“The coaching staff know exactly how to monitor us and how hard to push us during the season,” he said.

“The speed and physicality of the game doesn’t compare to anywhere else in the world. When we played against some teams in Holland we were much stronger and faster than them.”

After two weeks relaxing back in his native Glen Waverley, the ultra-focused youngster decided to head back to QPR headquarters nine days ahead of schedule.

“Training starts on the 28th (of June), but I decided to resume training on the 19th,” he said.

Skapetis believes the tailored pre-season program will give him every opportunity to progress when the campaign resumes in August.

“In pre-season they’ve gone away from the old school gut running,” he said. “It’s still fitness work and conditioning but with the ball – the ball is always at your feet.”

In two months time when the hard work is concluded and one of QPR’s brightest prospects begins the new season there’s only one thing in his mind.

“I want to try and force my way into the first-team and score goals like I did last year,” he said.

If he does in fact replicate his previous 12 months, there’s every chance the persistent youngster can achieve his goals.

Skapetis is proud of his Greek ties and whilst he is adamant Australia is first-choice, he’s still open to representing Greece.

“At the moment Australia have my best interests at heart, but I’ll never close the door on Greece,” he said.

And what about the future? In five years time Skapetis will be 23 years old, and he’s under no illusions about the position he envisages for the future.

“I want to be playing top-flight English football and earning international caps with the Socceroos,” he said.

The confidence he exudes is enough to suggest Australia and QPR have a real gem on their hands.
Watch this space.

* This feature was first published online for outside90.com. Adrian Houghton is the chief editor of Outside 90.