In an exclusive interview with Neos Kosmos, Greek football league star Billy Konstantinidis reveals he is in talks with three A-League clubs for the 2013/14 season 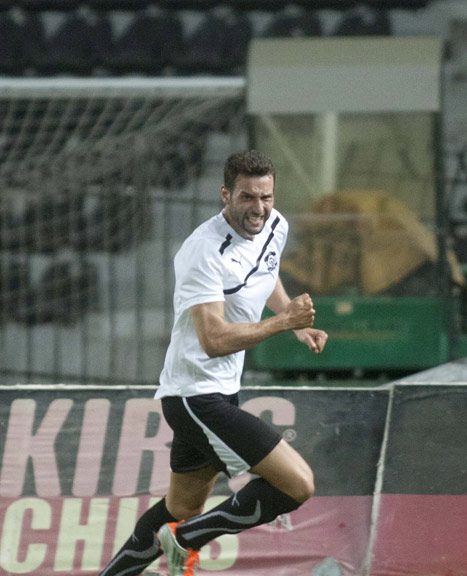 Billy Konstantinidis has returned to his hometown of Melbourne after seven years of playing professionally in Greece’s football league. The tall striker, known for his stints at Iraklis, Veria, Niki Volos and Pierikos among others, is now in talks with three A-League clubs, including Melbourne Heart, Adelaide United and Central Coast Mariners. After falling in love with the sport in the Victorian Premier League, he’s hoping to jump start his Australian career again.
In this interview, the 27-year-old discusses why he’s chosen to come home, his time in Greece, the differences in football culture, the maturing A-League and his career goals.

Helen Velissaris (HV): What offers have you gotten in Australia?

Billy Konstantinidis (BK): At the moment there are discussions with Melbourne Heart and Adelaide, pretty much weighing up options and seeing what comes out of them So there are two/three teams – Central Coast as well. So we have a few decisions to make.
They’re looking at wherever they have weaknesses. Forward line, back line. So they’re (my managers) like, who needs a tall striker? The clubs put up their hand and say lets have a look. You feed them the videos, the stats, and they’re like OK.

(HV): The Mariners won the last A-League season. Will that sway you in your decision?

(BK): I’m not personally looking at where they finished last season, I’m pretty much looking at where I can fit in best. Pretty much trying to help the club as best as possible. That’s my goal, I’m not too fussy or picky.
I’m pretty set on coming here and proving myself and showing what I was doing over there and taking it to another level over here.

(HV): Greece must be chasing you to bring you back?

(BK): I have two offers at the moment to go back to Greece, but I’d like to be a part of this A-League, especially with the World Cup campaign coming up. My goal is to play football here so that the actual nation can see me and hopefully get a spot in the Socceroos next Cup. You’ve got to set your goals.
I’d actually prefer to be in Melbourne with my family. I’ve been missing for seven years so it’s one of the factors that has pulled me back.

(HV): How different is the football culture and training in Greece?

(BK): I started playing for Veria. They’re in SuperLeague at the moment. It’s very different.
Our soccer training then (back in Melbourne) was twice a week sometimes.Making the switch, the biggest hurdle was the trainings. Every day we were training, and a lot of time we were doing double sessions.
Coming from the enjoyable environment here to there, you’re at the bottom of the food chain again.
You have to prove yourself and there are a lot of fantastic players. Every week, every day almost you’re competing for your position.
It’s different tactics of football over there. We spent a lot of hours doing tactics.
There are politics. You have to be switched on to balance stuff out too.

(HV): What was your favourite Greek club that you played for?

(BK): Last year I was with Iraklis in Thessaloniki – I was with them for a year. I can tell you by far that was the most enjoyable season in Greek football. The fan base was unbelievable. The connection with the fans, celebrating every goal with them. It makes all the difference. Just feeling really validated from a new crowd, different cultures, it’s worth everything.

(HV): Do you think the state leagues in Australia are at the same level as the second division in Greece?

(BK): After premier league, it’s a huge jump to A-League. I think we need to close that gap.
Because A-League is getting so competitive, and they’re bringing in a lot of players from overseas, I really think that the second division should be looked at a little bit more seriously. Before you go to the A-League, it’s the only stepping stone. So in order for Australia to produce players and to be scouting, I think they should have a better look at it.
In Greece, third division play every day and fourth division play every day. I mean the money is different in each category. But I was surprised they were doing it every day.

(HV): With talk of Karagounis moving to Australia and the crisis’ toll on football, do you think we’ll see more Greek footballers trying to sign to the A-League?

(BK): I think it it’s great for Greece now, reading about Karagounis it’ll raise heaps of awareness, and that’s all for Australian football.
About 5 years ago, there was no talk about coming to Australia. Now, with the crisis and their understanding of how well organized things are over here, there are actually a few players in every team that say bring us over there, organize a visa for me. They are keen.

(HV): A lot of our good local talent are being sold off to international teams for a small price, leaving the A-League short of good players. Do you agree with the transfer culture of Australia?

(BK): There are positives and negatives. If for a good price, Aussies can get imported. They actually give themselves a chance to prove themselves. If they up the price, they might start looking at the South American and Brazilian market.
On the other hand, if the clubs here are happy with the amount I don’t see why not.
I know a lot of transfers that have been cancelled because of money. So there’s no need to cut their wings, they can go for bigger and better things.

(HV): Do you think the A-League will remain cursed at a certain level if they keep transferring good players?

(BK): I’ve heard that a lot overseas. I think that’s where good marketing comes in, like bringing in Karagounis to take their positions, it would help a lot. Also the second division being close, that’s what I’d like to see. If they are scouting players, they can grab them and throw them straight in.

(HV): Tell us a bit about your time playing for the Victorian premier league?

(BK): I went through a few different clubs, but Northcote was the one that stood out.
The main stronghold was the family environment. They made soccer enjoyable, it does get tough at times, if you’re not performing well or there are pressures. The family environment was like a blanket for everything there. That’s what made it enjoyable, we enjoyed our wins and I think that brought out the best in everyone

(HV): What was your first recollection of your love of soccer?

(BK): From a young age, it was just like a sickness I had. I was going to school with a ball always.
If you really want something, you’ll do it. You won’t have to think twice. For me, staying at home, having the right diet is important. You’ve got to look after yourself, be a professional, you’ve got to oblige to the contract

(BK): My favourite is actually earning top goal scorer for Iraklis. I went there in the second half of the season, there were only 12 games left and actually ended up getting the top goal scorer for the season and the whole league. That pretty much put me on the map for Greece. That’s got to be my highlight, besides scoring a goal against PAOK with 15,000 fans and all the cameras there. That was great as a singular moment, but consistency with Iraklis was my highlight.