Captain George Kailis unveils the reality of a career in aviation 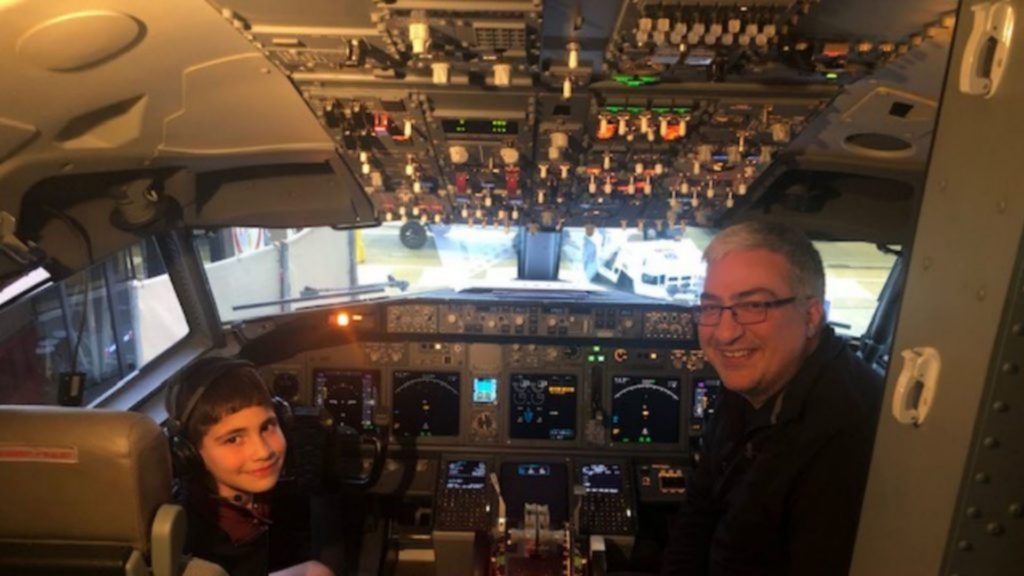 Captain Kailis sits in the flightdeck of the Virgin B737 Photo: Supplied

For every pilot who has gotten you from A to B, there is a missed birthday, a missed wedding and precious time missed with family.

Despite this being the path they chose, Captain George Kailis says “it’s a function of the job.”

“We spend a lot of time away from our home…there’s a lot of sacrifices to be made. Being in the bush I wasn’t around any of my friends or family and I didn’t have enough money to fly back every six months. Sometimes I wouldn’t see my family for 12 months.”

The pilot life is not all doom and gloom, but the road to becoming a captain takes more than just a few solo flights and simulator sessions.

“It took me a while to get a job because of the pilot’s dispute of 1989 in Perth so there were a lot of experienced pilots on the market, so my first job was around ’94 in Exmouth in WA,” he told Neos Kosmos.

“We’d spot the whale sharks off the reef, radio the tourist boats over so that people could go swimming with them,” he said.

He continued onto Port Hedland, flying inland to Indigenous communities, until moving on to Kalgoorlie in 1997 for two years with Goldfields Air Services.

“We were flying to these remote communities out in the central desert doing train driver crew changes out on the Nullarbor…flying around mining staff and we would bring back the gold with security guards to Kalgoorlie,” Captain Kailis said.

These aircraft were also used to transport the Royal Flying Doctors, who would be flown in for four days at a time around the central desert.

“I had some amazing experiences, met some amazing people…it’s quite a stunning place, that red dirt, a lot of beautiful mountain ranges out there, it’s a beautiful part of the country,” he said.

With each job, the aircraft got bigger and by the time Captain Kailis had reached his new post in Perth flying Maroomba Airlines, transporting government ministry and FIFO mining crew, he was steering 12 seater airplanes.

Eventually the new millennium rolled in and Captain Kailis secured a job with Kendell Airlines, a subsidiary of Ansett, but unfortunately the company went into administration in 2001.

It was then that Captain Kailis’ “labour of love” was tested, but instead of losing hope, he took the challenges in his stride.

“During the administration period I was living with my sister in Melbourne and driving up to Sydney once a month, sleeping on a friend’s couch, doing two days of flying to maintain my recency… and I would drive back down to Melbourne,” he said, remembering the long trips.

The light at the end of the tunnel came in 2003, when he joined the crew at Virgin Australia.

Captain Kailis hung up his apron and made his way up to the base in Brisbane.

“Well it was Virgin Blue then and that was my first jet aircraft I had ever flown so it was a big step up for me,” he said.

“It was very exciting, coming off such an unstable two or three years prior to that, to now going ‘that’s it, I’m going to become an airline captain with this organisation at some point, my ultimate career goal will be achieved.”

Years of training in high pressure simulator session and real flight situations had all led to this moment.

“You’re going from being a first officer to a captain so now all the decisions finally rest with you…They put you in some high pressure and high stress situations in those simulators and it pushes you right to the edge with your capacity, and sometimes way past it to see how you can perform under a high stress event. And I learnt so much about myself during that process, it wasn’t funny,” he recalled.

The road to captaincy however, started long before Captain Kailis even manned his first solo flight.

“Whenever dad would go away and I’d get upset if I couldn’t go to the airport to see the planes when he got dropped off and I just had a fascination with aviation, I wanted to fly, that’s all I ever wanted to do.”

Captain Kailis’ father Desmond was a professor of dentistry and naturally travelling was a function of his job.

His family history of travel dates way back to around 1915, when his grandparents immigrated from Kastellorizo all the way to Perth.

“Coming out of the Turkish occupation of Greece, the war coming, they said ‘we’ve had enough, we’re going’ and hence why a lot of them came to Australia, my father was also born in Perth and my mother in Darwin.”

“My mother’s [Jasmine] maiden name is Harmanis. My grandfather was a builder in Darwin and had a mining company, my uncle also got into mining and had Jubilee Mines which was a listed company and sold to Xstrata a few years ago.”

Coming from a family of hard workers, it is almost impossible to imagine that Captain Kailis would not have reached any goal he set his mind to.

Knowing the value of hard work and embracing his Greek heritage led him to be elected as union Vice President of the Federation of Air Pilots Australia.

Captain George Kailis hopes to revisit his Greek roots in Kastellorizo, with his two children Alexander and Sophia and his wife Ellan.

For now, he continues fighting for the safety of pilots across the nation and flying passengers across the world.

*This story was originally published 13 June