All seven prize winners are under 30 years of age, and were among 35 finalists. The UNEP prize offers startup funding and mentoring to help them with their innovative plans 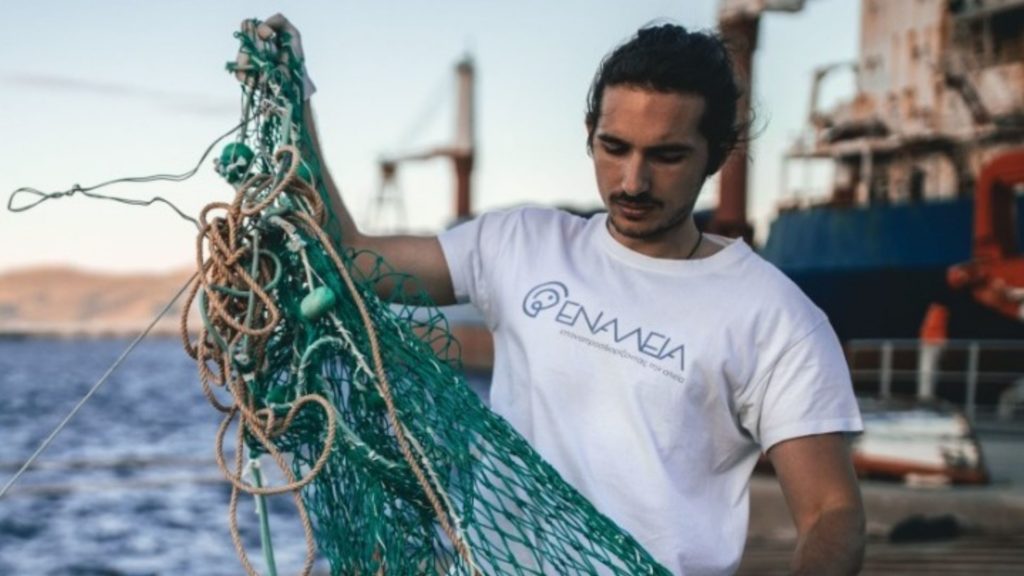 Lefteris Arapakis, 26, was named by the United Nations Environment Programme (UNEP) a “Young Champion of the Earth” on December 15, the day of his actual name day.

Lefteris is one of seven young scientists, engineers, entrepreneurs and activists from across the globe named by UNEP as its 2020 Young Champions of the Earth. With solutions to harvest water from the air, recycle plastic into paving slabs, and motivate fishers to haul tons of plastic out of the ocean, these changemakers show how innovative ideas coupled with ambitious action can help solve some of the world’s most pressing environmental challenges.

Lefteris is the fifth generation of a long line of fishermen. His family has fished off southern Greece, netting the same cod and red mullets that have sustained Greeks for millennia. But in recent years, overfishing and pollution, especially discarded plastic, have hammered Greece’s fisheries and led to a dramatic drop in fish yields in the Mediterranean Sea by as much as 34 percent in the last 50 years.

Out at sea, he noticed many boats around his hometown of Piraeus hauling in nets filled with rubbish, instead of fish. This plastic by-catch was then simply dumped back into the water. “ I got more and more worried about the scarcity of fish and the increase of plastic,” said the young Greek. “ I was deeply concerned that my father, and now my brothers, could not make a living out of this job, which is what they learned to do and what they love to do.”

The revelation led Lefteris to found Greece’s first professional fishing school, Enaleia (Greek for ‘together with the fishers’). in 2016. Its mandate would be twofold: teach fishers to ply their trade in a more eco-friendly manner and enlist the help of the seafaring community to scour the Mediterranean for discarded plastic.

Since its launch, Enaleia and its branch, Mediterranean Cleanup, have collected more than 80 tons of plastic from the sea. “ We teach students not just how to fish, but also how to fish so fish can exist tomorrow,” said Lefteris.

With this initiative fishers remove around 20 tons of plastic from the sea each month. Initially Lefteris and his team stored the plastic at recycling facilities at the port, but the increasing volumes motivated them to create an innovative partnership with Healthy Seas, an organization based in the Netherlands that upcycles fishing nets (the most common ‘catch’) into carpets, socks, masks and other consumer products. He also collaborates with Madrid-based fashion company Ecoalf, which turns half of the recyclables into other products, including coats and shirts.

Enaleia now works with 700 fishing professionals and operates in 12 Greek ports as well as Rimini in Italy.

Lefteris, who has a degree in economics and management from the Athens University of Economics and Business, says the plastic pollution in the fishing areas of the Argosaronikos Gulf “ has been significantly reduced”.

“ The fishers are saving the seas from plastic,” he added. The spread of COVID-19 dealt a temporary blow to Enaleia earlier this year. During the first lockdown in Greece in March and April, many of their sponsorship contracts were cancelled. However, Enaleia adapted to the pandemic and managed to increase the plastic collected from the sea. Once the pandemic passes, Lefteris plans to expand Enaleia’s work to other seafaring countries. “ We want to empower every fisher to catch plastic and then bring it back to the port and upcycle it. That would create a huge global impact.”

While the tide of marine plastic continues to grow, Lefteris  is optimistic about the future. “ I think there is a lot of awareness from our generation about plastic pollution and other environmental challenges. Awareness that I don’t think has existed on such a wide scale for decades,” he notes.

Setting up a fishing school

In statements to the Athens-Macedonian News Agency (ANA-MPA), he said that the award caught him by surprise while fishing, and he initially thought it was a joke. (UNEP had learned of his initiative from an interview to a foreign newspaper and invited him to try for the prize.)

A few years before the award, he said, “I was talking with my father, a professional fisher, and he told me they were looking for people to hire on their fishing boats. So I asked him, Why don’t you go to a fishing school to recruit people from there? He said there is are no fishing schools in Greece, so they can’t find people. That’s when a friend of mine and I decided to set up the first professional fishing school in Greece. This is how Enaleia began.”

The school was founded in 2016 and to date has trained 110 people who were unemployed, he told ANA-MPA. What turned him toward the environmental part, however, was a chance find of a faded soda can found in the nets: “It had turned white over the years and as I looked at it closely I saw it had an expiration date of 1987. That meant it had been in the sea for 30 years. The man who caught it threw it in the sea again, saying, Plastics are not our problem.” This, he said, led to founding Mediterranean Cleanup.

All seven prize winners are under 30 years of age, and were among 35 finalists. The UNEP prize offers startup funding and mentoring to help them with their innovative plans.