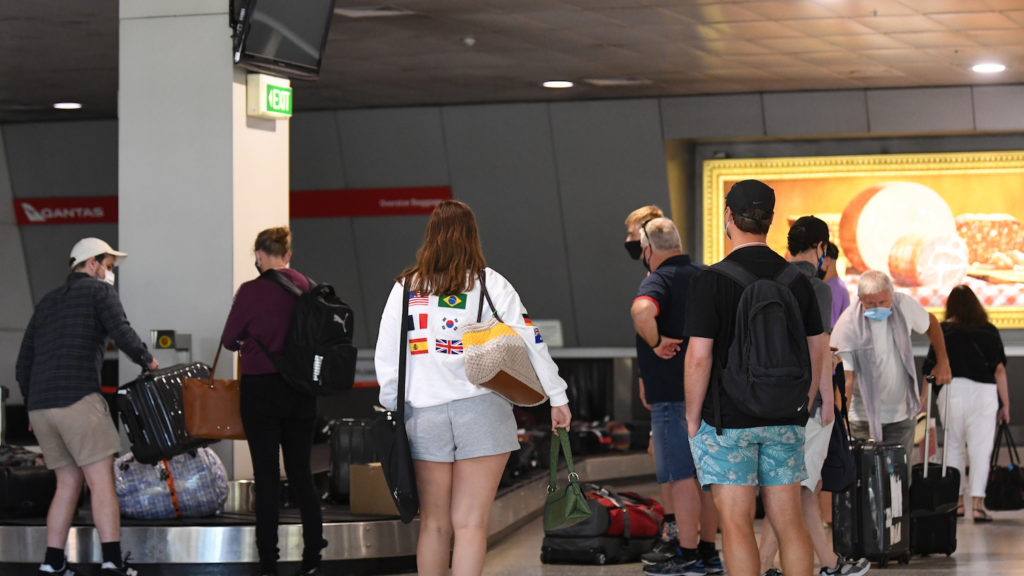 People are seen in a baggage collection area at the airport. Photo: AAP/James Ross

At the end of 2020, there were reportedly about 36,000 stranded Australians trying to return home, among them, several Greek Australians.

With commercial flight tickets being priced way over normal, many citizens and residents are still trapped overseas.

Currently, several countries cannot provide accessible flights for applicants registered with Dfat with some airlines advertising fares for up to $26,000.

Meanwhile, caps on hotel quarantine both price-wise and mainly in terms of how many people are allowed to quarantine is putting another obstacle on returns.

Australian commercial film director Tom Noakes, spoke to Guardian Australia about experiencing several flight cancellations in 2020 while trying to return from Europe but managed to fly into Sydney in November. Noakes’ partner remains with her family in the UK until her scheduled flight in February but fears she could suffer a cancellation.

Prime minister Scott Morrison confirmed earlier this year that government-chartered flights to bring back some of the most vulnerable were still operating.

“There is one arriving next week because with chartered flights we have total control of who gets on the plane so we can ensure that it is vulnerable people who get on those flights,” he said.

“It’s important that we keep those chartered flights going where they can be done in a safe way.”

Caps on international arrivals in NSW, Western Australia, in Queensland will be reduced by 50 per cent until February 15 and travellers to Australia must now return a negative COVID-19 test result prior to their departure to Australia.

“There will be exemptions in extenuating circumstances. This could include for seasonal workers from amber-risk countries where there is limited access to testing,” the Prime Minister added.

Arrival caps will automatically return to their previous levels on 15 February 2021.