Arnold Schwarzenegger, an immigrant, draws on childhood memories to describe US Capitol riots 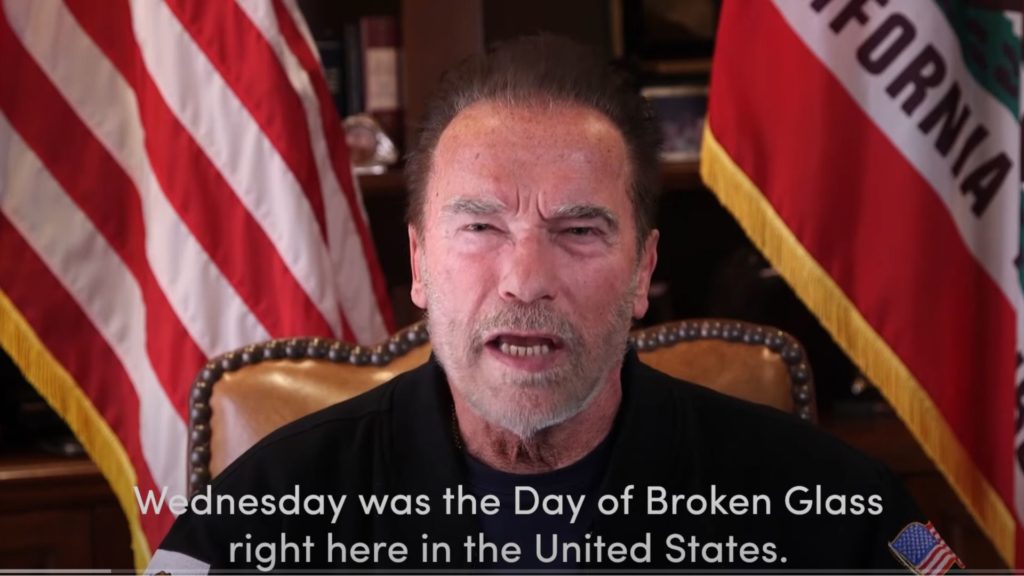 Arnold Schwarzenegger, 73 was born in Austria, and drew on memories from his childhood in a video he shared online. He raises the dangers and horrors associated with the political dynamics of the ‘lynching mob.’ Simply, it’s a species of terrorism. He compares the Trump incited attack on the US Capitol to an event that marked Nazi Germany’s rise. The former governor of California and actor compared last week’s events in Washington DC to “Kristallnacht” or the Night of Broken Glass. Kristallnacht was a program carried out against Jews on 9-10 November 1938 by the Sturmabteilung which literally means “Storm Detachment”. These mobs were the Nazi Party’s original paramilitary forces. The German authorities looked on without intervening. The name Kristallnacht (“Crystal Night”) originates from the shards of broken glass that littered the streets after Jewish-owned businesses, buildings, and synagogues were vandalised or destroyed. That event is significant because it marked the rise of Nazi Germany. As I am sure many would agree, the rest is disturbing world history and that history is at risk of being repeated in a nuclear age if these divisions are not brought to an end.

“I grew up in Austria. I’m very aware of Kristallnacht, or the Night of Broken Glass,” Mr Schwarzenegger said in a seven-minute post to Twitter.

“It was a night of rampage against the Jews carried out in 1938 by the Nazi equivalent of the Proud Boys.

“But the mob did not just shatter the windows of the Capitol. They shattered the ideas we took for granted.”

Mr Schwarzenegger then shared a very personal story from his childhood in Austria, reflecting on his family and the aftermath of World War II.

“Now, I’ve never shared this so publicly because it is a painful memory. But my father would come home drunk once or twice a week and he would scream and hit us and scare my mother,” Mr Schwarzenegger said.

“I didn’t hold him totally responsible because our neighbour was doing the same thing to his family, and so was the next neighbour over.”

Mr Schwarzenegger is best known for his action-movie roles, he likened American democracy to the sword he brandished in a number of his films.

“Our democracy is like the steel of this sword,” he said as he hold the sword used in the 1982, Conan the Barbarian move.

“The more it is tempered, the stronger it becomes. And to those who think they can overturn the United States Constitution, know this: you will never win.”

Mr Schwarzenegger concludes by saying that his experience growing up in Europe has demonstrated “firsthand how things can spin out of control”.

Mr Schwarzenegger then proceeds to denounce Mr Trump, he “sought a coup by misleading people with lies”.

“My father and our neighbours were misled also with lies, and I know where such lies lead,” Schwarzenegger continued.

“President Trump is a failed leader. He will go down in history as the worst president ever. The good thing is he will soon be as irrelevant as an old Tweet.”

Mr Schwarzenegger served as the 38th Governor of California from 2003 to 2011. California had the highest resident population in the United States in 2020, with 39.37 million people.