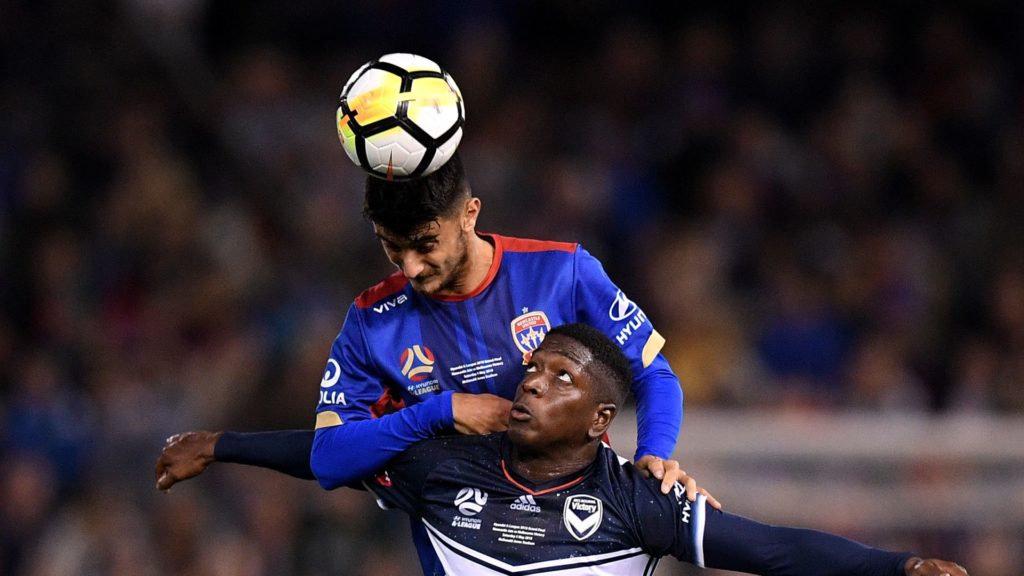 Johnny Koutroumbis of the Jets competes to head the ball with Leroy George of Victory during the A-League Grand Final in 2018 Photo: AAP Image via Dan Himbrechts

Five years ago Johnny Koutroumbis joined the Newcastle Jets as a fresh faced 18 year old and has not left the team since.

The young defender from Adelaide made his way to the east coast to join the Jets, but noted that the shift over was not as tricky as he may have thought.

“Coming from Adelaide into Newcastle there’s not much of a change. I mean Newcastle is a lot smaller but in terms of the vibe of the city it’s almost the same really. People are friendly, you get to know a lot more people while you’re here but I wouldn’t say there’s much different except for the size of the places,” he told Neos Kosmos.

After spending some quality time with family in Adelaide during the nationwide COVID lockdowns, the 22-year-old returned to Newcastle and is ready to take the football world by storm.

I wasn’t really drawn to football, I guess I was introduced by my father. He put a ball at my feet at a very young age and I remember watching hundreds of games with him. I remember watching the 2004 Euro with him, he even bought memorabilia of it and a disk of it. I think I’ve watching it about 20 times.

I wouldn’t say I was sort of drawn to it, I was really, in a funny sense I had no choice but in saying that, I thank my dad for doing that.

I usually just listen to music throughout the day and just chillout. I do what I need to do in terms of food and stretching, stuff like like.

I wouldn’t say I listen to songs individually, I listen to artists. People like Drake or Lil’ Key, rappers from this era. I listen to a bit of everything.

Obviously when you come up against different players that come from around the world, they’ve got different qualities. Some are better than others. That’s probably the most difficult part of the sport, but you have to do your homework and have to prepare for the game right.

I wouldn’t say just one. I’d say probably going to the Asian Cup qualifiers in Cambodia with the under 23s and playing in an A-League grand final.

It’s changed it dramatically, it’s what I do for a living. I’m very blessed for what I’ve been given, otherwise I guess I’d be home and studying or working a trade, but I’ve been lucky enough to make this my job and my life.

This season coming I want to help my team make the finals, minimum. If we can do more then that’s just a bonus for me, I’m thinking realistically here. Newcastle isn’t really a team that makes finals every year, so if we make finals this year I think it would be an achievement ticked off.

Like I said, if we do more it’s a bonus and also play well enough to cement my spot in the Olyroos for the Olympics if that goes ahead.

I wouldn’t say I know a lot of about this but I know my way around the garden a little bit, because I used to help my dad work back when I was in Adelaide. I’m a bit of a gardener. He was sort of a landscape gardener, with lawns and trees and that sort of stuff.

I don’t mind a bit of PlayStation here and there just to unwind a little bit and get my mind off football because obviously we can’t think about it 24/7. It’s a good way for me to get my head right. I’m living with some of the boys as well so it’s good to hang around them.

I’ve got some personal goals I want to meet, I won’t get into detail with that. The football side of things, I really want to make finals. It’s always a good feeling. When we made the grand final almost three years ago, you walk around the town and it was such a great atmosphere to be around and I want to relive that memory again. That’s probably the main priority this year, to make the team make the finals.

Everyone strives to be the greatest, obviously that’s what I want as well. I want to play for my country, I want to play for Australia and it’s going to take a lot of hard work and more sacrifice but if I put my head down and focus on what I need to do then maybe some day, with a bit of luck as well I’ll be able to play for my country and hopefully one day captain them. Maybe that’s how I’ll be remembered, by captaining Australia.