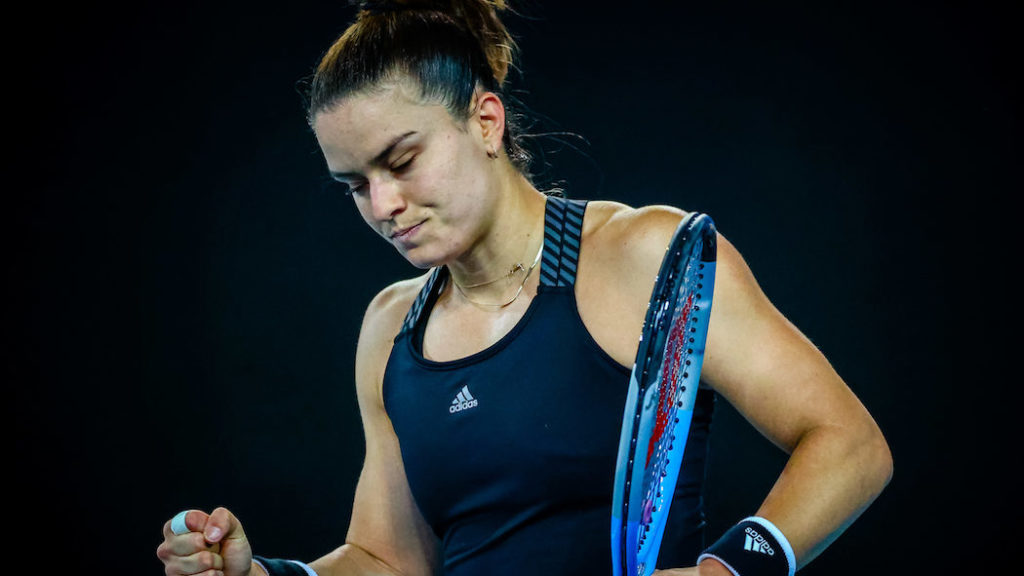 Greek Maria Sakkari (WTA 22) and German Angelique Kerber (WTA 25), in the quarter finals of the women’s match at the WTA Grampians Trophy. Photo: AAP via AP by PATRICK HAMILTON/Belga/Sipa USA

Maria Sakkari who feels like home in Australia, has beaten the former World No. 1, German Angelique Kerber and is off to face Anett Kontaveit tomorrow..

Her win sees her moving on to the Grampians Trophy’s semi-finals with a 6-4 6-2 score. Sakkari had previously lost to Kerber twice.

The Greek star pumped through after the first 1-4 set and break point down making a difference early on and keeping it throughout straight sets that made the outcome clear in 1 hour and 19 minutes.

“It was great playing back in this amazing court with a crowd after a year; after an entire year actually. It means a lot to the players to play with a crowd,” Sakkari said.

Tsitsipas won with a 5-7, 5-7 but could not continue to verse Rafael Nadal due to his waist injury.

“It was a good match. I think I played very solid throughout the whole match and showed aggression. My forehand was on fire, my serve was working really well for me,” Tsitsipas said after the game. “I executed my game plan very well and had a clear picture of what I was intending to do out on the court.”

“Right now I’m in a good… I’m good physically and I’m goo mentally.  I’m willing to just go out there and give everything I have,” he said.  “This tournament means a lot to me. It’s an important tournament in which i have the opportunity to play for myself and play for the people, the Aussie greeks that are out there, supporting me and giving me their love and appreciation for showing up and playing here, which means a lot.”

On a completely different note, Tsitsipas relaunches a limited edition souvlaki at Stalactites, offering 100 per cent of this year’s sales to those affected by COVID-19 and food insecurity. Melbourne based charity SecondBite and ‘Together for the Children’ (Mazi gia to Paidi) in Greece will be receiving the funds. Steph’s souva is available until Wednesday 24 February.

“I feel at home in Melbourne and I love being welcomed by the Greek community here. All throughout quarantine I’d been craving a Stalactites souvlaki so I’m excited to finally be here with my team and family,” Tsitsipas enthused.

Finally, Rafael Nadal, Novak Djokovic and Serena Williams could be making history at the Australian Open.

If Nadal’ wins, he will become the sole man withe the most Grand Slam singles titles. A second Australian Open trophy also would allow Nadal to become the first man in the Open era to win each Grand Slam tournament at least twice. He has 13 championships at Roland Garros, four at the U.S. Open, two at Wimbledon.

Williams on the other hand already has 23 Slam singles titles second to Margaret Court, with 24 — 11 after professionals were admitted to major tournaments.