Greek Schools of Melbourne: Stepping back in time

The history of Greek schools in Melbourne starts almost a whole century ago.

One of the first Greek schools established in Melbourne can be traced back in writing to 1921, in the first volume of the Greek Orthodox Community of Melbourne and Victoria (GOCMV) minutes from a Board Meeting on 3 February of that year.

During that particular meeting, board member Aristotelis Papalexandrou emphasised that one of the most important matters the organisation needed to face was the “establishment of a Greek School”.

Mr Papalexandrou pressed the matter further in the following meeting and soon enough under the auspices of the Church, 530 pounds were collected to build a school.

It was no easy feat, as internal differences and ongoing court cases put a halt on the plans.

By 1923 a Greek school was established but there was trouble in paradise and it folded the following year.

It took another six years before another Saturday school was set up by the organisation under an independent school committee with Dimitri Mavroidis from Kalovrassi, Samos, as the headmaster. It was initially based on the third level of the Clarke building on Lonsdale Street, Melbourne.

Years later, as ships like the Ellenis, Australis and Patris docked in Melbourne, the new waves of Greek migrants searched for ways to uphold their culture and language on foreign shores.

More Greek schools began popping up to accommodate the growing number of Greek children in the 1960s.

One such school was the Academy of Modern Greek, initially situated in Curtin House on Swanston Street in Melbourne.

Evie Liolios’ parents, Spyros Liolios and the late Vasiliki (Koula) Lioliou were principals of the Academy. ‘Kyria Lioliou’, as she was known by hundreds of Academy graduates, was also a beloved teacher at the school. 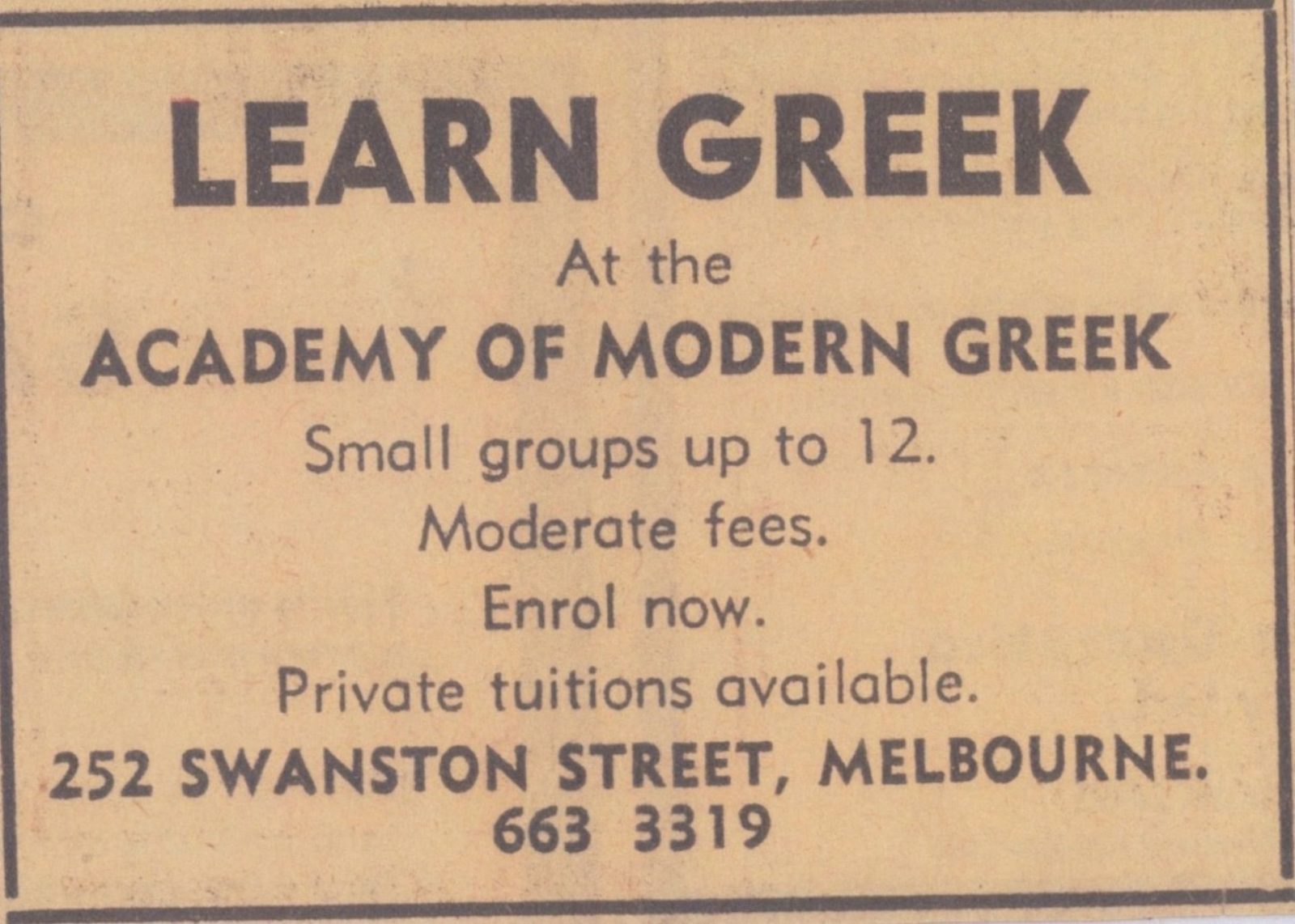 Many of her students marveled when she would break out into song and her passion for education was infectious. Kyria Lioliou went above and beyond for all of the students of the Academy.

“During the late 70s to mid 80s, there were 700 students attending Saturday classes at the Academy…She arranged for every primary school aged child to have an ‘imerologio’ – a diary where they could write anything they wanted. They had to write in the diary as part of their homework, but for Kyria Lioliou’s eyes only,” Ms Liolios said.

Children were given the opportunity to express themselves freely and it allowed Kyria Lioliou to know what their emotional and educational needs were.

“They would write things like ‘yesterday mum and dad were yelling’ and she knew where each child was at. She responded every week to every child, writing notes below that week’s entry. Could you imagine reading 350 diaries every fortnight? She carefully read and contemplated and meditated on them all week. I don’t know how she did it, she also had her own classes!”

Kyria Lioliou also wrote the curriculum for the whole school, for each year level, paying close attention to all the educational material and the instructional design to meet the needs of the students she so dearly loved.

The school did not stop at just teaching students Greek and instead found that the best way to preserve this ongoing learning of Greek language and culture was to continue supporting their students beyond their graduation.

“My mum and dad were Montessori teacher trained from Greece. They began their work at the Academy in 1967. In the 1978 staff photo there are some of their graduates who became their colleagues. Mr and Mrs Liolios were actively involved in raising the funds required to create the Melbourne University Modern Greek Department. Many of the younger faces in the photo got their degrees and returned to the Academy to teach,” Ms Liolios said.

Con Tamvakis remembers his time at his Ascot Vale Greek school fondly, looking back at the sense of community he felt back in the mid-sixties.

“What I liked about it was the fact we were all Greek kids. The ‘filia’ (friendship), the culture, it help me grow up with the Greek culture. And so I sent all of my kids to Greek school,” he said.

At the time Greek families of Ascot Vale and Moonee Ponds formed a committee to raise funds so they could eventually build their own church. Through donations the community was able to purchase a property at 71 The Parade Ascot Vale and as enrollments grew, the school too was moved to the new premises. The 'constitution' held the names of those who pioneered the Moonee Ponds church Photo: Con Tamvakis Names of those who pioneered and were responsible for the current church in Moonee Ponds as written in their constitution in alphabetical order Photo: Con Tamvakis

In looking back at the decades passed, Mr Tamvakis takes his own walk down memory lane, casting his mind back to one of his favourite Greek school memories of reciting his Greek Independence Day poem.

“Getting out on the stage there and saying my poem and people getting up yelling ‘Bravo! Bravo! Bravo Tamvaki!’ I was very good at reciting my poem,” he recalled laughing.

Whilst there are joyous memories of singing songs, reciting poems and participating in traditional dancing, for many there are also memories that rather be forgotten.

Some schools, like the Academy were more progressive at the time, banning the use of corporal punishment against children.

However elsewhere it was not uncommon for students to be hit with rulers or canes (known in Greek as the ‘verga’), or have their ears pulled.

In one instance Mr Tamvakis readied himself for punishment.

“They would say if you didn’t learn your poem or grammar, you would cop the ‘verga’. My teacher, she was lovely. Every time she would say ‘Kosta Tamvakis get up to recite your grammar’, I would just stand up and walk towards her with my hand out,” he said.

“She would look at me and smile and just tap me. She wasn’t ‘old school’, but when I started Greek school in the mid-sixties, they were very strict. Even the priests.”

As photographs turned from hues of grey to colour, education also progressed to be a little more colourful and a little softer.

To this day, the importance of those times to many in the Greek community are exemplified through the countless photographs and notices people have held on to for all these decades along with the lifelong friendships made along the way.