With the help of architect and urban philosopher Billy Kavellaris, Neos Kosmos examines the shortlisted entries for the Flinders Street Station design competition 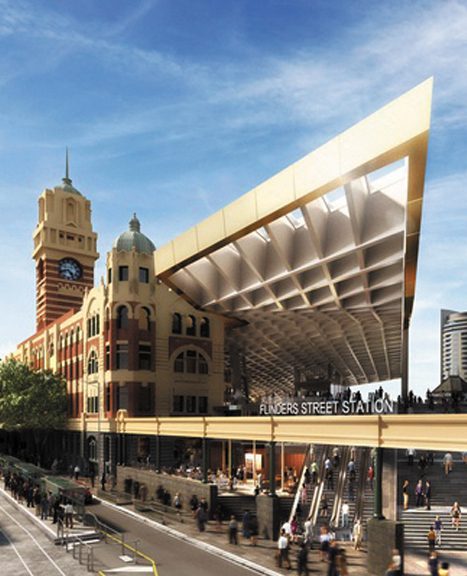 Planning began in earnest this week to transform Melbourne’s Flinders Street Station, with the unveiling of six designs submitted to the Victorian government’s design competition.

Picked by a jury comprising urban planners and architects – along with chef George Calombaris – each design places the iconic station against a brave new web of glass, steel, bricks and concrete, and in one audacious vision, the platforms are even topped by a park with trees.

Each re-imagines Flinders Street Station as much more than an iconic railway hub, literally expanding its horizons to realise a whole new riverside precinct.
The historic main building was always going to stay, the brief being to see how the world’s most creative designers could transform the 104 year-old structure and reinvigorate the 4.7 hectare station precinct, now mostly derelict, not least along its Yarra river edge and western approach.

While the winner of the $1m competition has been chosen and will be announced on August 8, the Victorian government has taken the bold step of allowing democracy to play a part in the ongoing process.

The People’s Choice component of the competition runs until August 5, inviting the public to cast its vote on which design appeals against a number of criteria. The government says the feedback will be used to develop and refine the winning plan.

One thing is for sure; debate on the design has only just begun and will become more vigorous.

Urban developments of vision and daring need the public purse to cough-up hundreds of millions of dollars. They are always controversial and their delivery is always reliant on precarious political support.

Delivering the new Flinders Street Station will test the resolve and imagination of its political backers as much its designers.

The six designs chosen encompass a diversity of experience and approach, from a proposal by a group of local architectural students – Eduardo Velasquez + Manuel Pineda + Santiago Medina, to one of the biggest brands in world architecture – Zaha Hadid Architecture, who are working with local company BVN.

The students’ approach includes the creation of an urban forest above the new station roof, Hadid/BVN’s dramatic space-age vision includes a monumental canopy and sweeping concourse celebrating ‘the grandeur of travel’.

NH Architecture retains the existing canopies used on the platforms under a glass lattice roof, part of its vision of a station which draws from the memory of generations who have used it in the past.

To unpick a few of the merits of the designs, and the prospects for the project as a whole, Neos Kosmos spoke to Billy Kavellaris, managing director of Melbourne’s boutique award-winning architectural practice Kavellaris Urban Design.

For Kavellaris, some of those short-listed meet the key challenges better than others.

“One of things that is most difficult to achieve is activating the river front. It’s a very thin sliver of space that you have to play with,” says KUD’s founder.

“The John Wardle + Grimshaw one really connects to that idea, in terms of creating a public space that allows people to travel on their bike or by walking along the path and then veer off into the station.”

Most of the proposals recommend changes to the tram network and stops around the station, with ARM and Hadid/BVN suggesting changes to areas well beyond the station site.

The interplay between Fed Square and the station’s eastern entrance is an obvious contender for sweeping away obstructions, allowing pedestrians to move between the two more easily.

Ashton Raggatt McDougall’s intention to create a school within the new station is the kind of radical ‘outside the box’ approach Kavellaris applauds.

As an unconventional designer himself, Kavellaris is drawn to the Melbourne students’ radical proposal – for a park on the roof of an enclosed platform structure.

“In the city grid we really have only one or two grassed areas – one outside the State Library and one around St Patrick’s. We have plenty of parks in the periphery but we don’t have one in the city and this idea works well.

“The finalist who demonstrates the most powerful ‘contextual response’ of all, is John Wardle Architects + Grimshaw,” says Kavellaris.

“For a building like this we need to tie it into its historical context and I think their’s does that very well. One thing we do know is that brick is part of our vernacular for buildings. This design uses that material in a contemporary way and I think it’s a great response that ties it into the actual fabric of Melbourne.”

With some of the designs incorporating retail areas, KUD’s director believes it’s an element that should be avoided, despite the attraction of commercial income it would bring. Southern Cross Station is not a good model, he says.

“We don’t want capitalism on steroids in our public spaces. We need relief from shopping. Shopping is ubiquitous. Having good urban public space doesn’t always relate to economics, there are other ways to activate the space.”

And if Billy Kavellaris was a betting man, I ask, who would he put his money on to win the competition?

“I think the Hadid/BVN design will win because of the statement it makes. It announces itself as a transport hub, it integrates with the street very successfully, but also I think it will win because Zaha Hadid is an international brand name. I don’t necessarily agree with that sentiment, but I think that will have had some influence in the decision-making process.”

As we conclude, I’m interested to hear Kavellaris’ views on the public feedback process. Does he think the People’s Choice extension to the competition is a useful exercise?

“It’s not a reality TV show, these are very complicated buildings. It’s more than just taste and opinion, it requires experts to make formulated views on these subjects.”

Architectural competitions of this scale don’t come around too often. It’s also not uncommon for plans for competitions to not translate into bricks and mortar. The Victorian government has suggested it could be a decade before construction begins.

Kavellaris, who says he’s a realist rather than a cynic, suggests the chances are that it might not even happen at all – in the shape that the competition winning entry predicts.

“Fed Square cost $490m from an original budget of $125m, and Fed Square is nowhere near as big and as complex as this, and that was a decade ago,” he says.

“Maybe this is the beginning of a symposium that speculates on what this key piece of infrastructure should be, seeing what we – as a culture and as a people – see the value to be, and somehow determine what monetary value we put on that. The Hadid/BVN project would cost an enormous amount of money. I don’t think it’s unrealistic to say that the project could exceed a billion dollars. It’s one thing to have a utopian vision of what we see our city to be, but don’t we need to do a cost benefit analysis, and ask how much culture is worth? Culture doesn’t need to have titanium ceilings…”