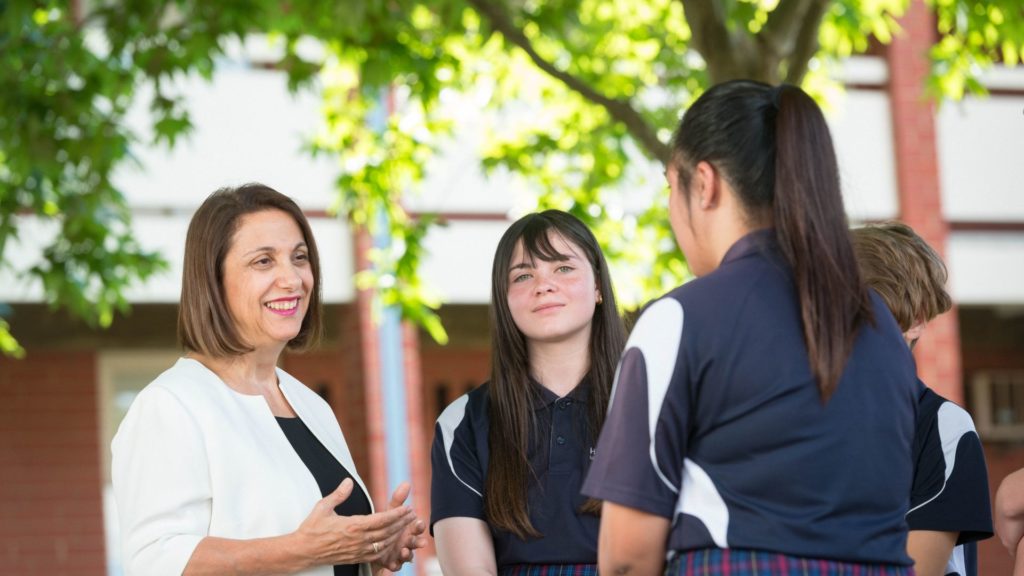 One of the main aims of the Australian Space Agency that was created in 2019 with its own federal budget, is to triple the size of Australia’s space industry and create 20,000 new jobs by the end of the decade.

Hamilton Secondary College in Adelaide with its space school, the Mike Roach Education Centre, is sure to benefit from its proximity to the space agency which opened its offices in the South Australian capital just over a year ago.

The Victorian Space Science Education Centre (VSSEC) that was inspired by Michael Pakakis AM served in turn to inspire Hamilton Physics teacher Mike Roach who visited the centre in 2016.

Mr Roach approached Principal Peta Kourbelis with the idea of creating a similar centre at their school in Adelaide.

Ms Kourbelis told Neos Kosmos that the physics teacher approached her with the idea of creating a specialised area for space. She saw the benefits of the plan and supported the idea. The centre, that has been named after Mr Roach, was completed in September 2017 and has been running since with increasing success. Its centrepiece is the Mission to Mars programme.

“We received a grant as a STEM (Science, Technology, Engineering and Maths) school and my team thought it would be a good idea to do something around space.”

The following year, the school developed an outreach programme for students from all over South Australia.

“We started the outreach program for once a week but now we have to set aside three days a week because of demand. We reach about 2,500 students a year (in the state),” said Ms Kourbelis. “We initially provided information about our programme through our website, through exposure on space forums and advertisements through space and maths associations but now it is largely through word of month and repeat business. There are a number of schools who are regulars now.”

Tying the teaching of STEM subjects to space-related work, such as the school’s Mission to Mars programme is the honey in the pot to draw students to learning and applying scientific and mathematical principles taught in the classroom to situations that could be faced in a real journey to Mars.

Hamilton’s Mission to Mars programme is integrated into the curriculum taught at the school. The centre itself boasts four rooms: a briefing room, the Mission Control Room, the Mars Surface Room and the Mars laboratory.

“Every learning area has a unit relating to space. For example, in Physical Education we look at what type of shoes the astronauts should wear and we look at what health programs they should follow. We consider what space travel does to the human bone structure.

The Mission to Mars is divided into two main components Mission Control and the other part is looking at the astronauts on the Mars surface.

There is a geological component in which there are seven geological zones based on the crater on Mars that is under exploration.

“The students analyse the rocks to determine their age and whether they hold the possibility of life,” said Ms Kourbelis.

READ MORE: Greek teacher who inspires students to reach for the stars honoured on Australia Day

“From next year, we will start a space academy for Years 7 to 10 that will be based on the mission to Mars. The students will be doing robotics for rovers (on the Martian surface), satellite communications, a medical stream looking at the health of the astronauts and how to stay healthy (in space and on Mars).

Through its centre, Hamilton offers distinct pathway for Years 11 and 12 offering certificates that havef to do with the space industry such as in manufacturing technology, drones and aviation. The industry is not just about rockets and astronauts. Its applications are many and various.

With more and more countries developing their own space industries and programmes, the issue of regulating space will become increasingly important.

“Space law is coming into its own. Anyone can fire a satellite into space where there are no boundaries. But what happens if a satellite comes crashing down. Who is responsible? The country that launched the satellite or the companies that built the part? We had the University of Adelaide’s law faculty hold workshops at the school for the students to look at these issues,” said Ms Kourbelis.

The centre has stimulated interest among the parents in STEM and space.

“I give parents a tour on a weekly basis and nine out of 10 parents visit the space centre.

“We are in a new generation where space is a frontier and there are a lot of jobs that will come from it. We have the opportunity to steer students towards the space industry and to make them more competitive in it. There are wide career paths opening here.”

The principal’s own background is in the arts. She studied for a Bachelor of Arts at the University of Adelaide before becoming a teacher of Greek, History and English.

“I don’t have a science background but I have learnt a lot. I have oversight of the project and develop the strategies, working with experts, to get the work into the curriculum course work for our Years 11 and 12.

Ms Kourbellis was five years old when the family emigrated from Pyrgos to Adelaide where her uncle lived who sponsored the family to come in 1964.

“I was the first girl in the family to go to university. My father who had owned a furniture factory in Greece worked in the same industry in Adelaide while my mum looked after me and my brother., a science teacher.

“Ours is a typical story of a Greek family in Australia. We were part of the Greek community and we went to Greek school. We have carried it through to our own children. My children speak Greek and grew up within a Greek culture,” she said.