Lambros P. Indares, grandson of a commanding officer of the 1821 revolution, celebrates the 50th anniversary of Greek Independence with a 21 gun salute at Alcatraz Russian Naval crew during an expedition to the United States in 1863 – Credit: Indares Family archives

The newspaper clipping, faded with time and yellowish, reads as follows:

The Greek residents of this city [San Francisco] celebrated the fiftieth anniversary of the Independence of Greece from the thraldom of the Ottoman Porte, on Thursday. In the morning, divine services were held in the Greek Russian Church, No. 911 Jackson street, Johannes, Bishop of Alaska and the Aleutian Islands, officiating.
Exercises
At the conclusion of the service, in answer to an invitation from Judge Fisher, the Greek Consul, several gentlemen, among whom were prominent Americans, proceeded to the Municipal Court room, where speeches were delivered by Judge Freelon, Assistant District Attorney, and Messrs., Indares and Orphinidi, two Greek merchants of this city.
General Observances
In answer to an invitation from Judge Fisher, all the foreign Consuls of the city hoisted their flags in honor of the day
A Salute
Of twenty-one guns was fired at noon from Telegraph Hill, which was answered by the fort at Alcatraz. The Greek flag was hoisted over the two Russian men-of-war ships in the harbor, each of which fired a salute of twenty-one guns. 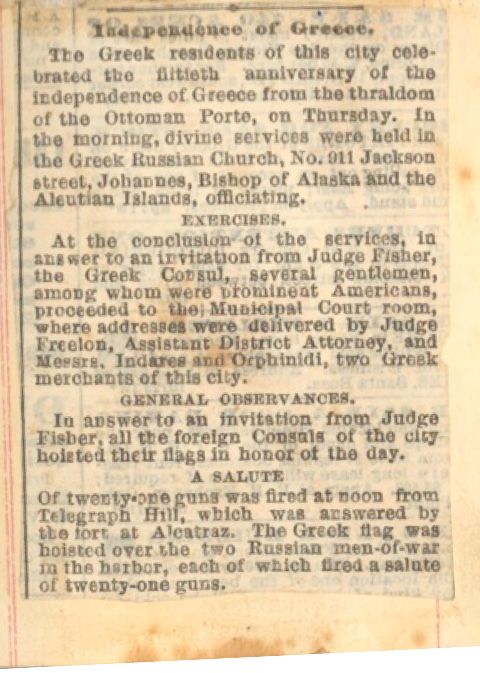 The landscape is familiar, the island of Alcatraz and Telegraph Hill, iconic landmarks which are linked with the city of San Francisco. The images are familiar, those of the fortress and its legendary canons that protect the entrance to the harbor. The Hill, the observation point of the city for both land and sea, with its telegraphic pole on its peak that was used to notify the city’s inhabitants of the type of ships that would approach and enter the port with their cargo.

The thriving and rapid development of the city is recorded by photographers, in stereoscopic imaging, a technique used to enable a three-dimensional like effect.

There are also images and documents in which the lives of the main protagonists are etched. With these resources we can review the details of the event and of those who attended the celebrations that took place on Thursday, 6 April, 1871. In an eerie way, with the use of our imagination, we can re-construct the ambience of the celebratory occasion by piecing together the fragmented information in our possession.

It is five years after the American Civil War and four years after the United States acquired Alaska from the Russians. The Californian gold rush changed the region’s landscape with the illusive promise of riches. The Port of San Francisco was rapidly revamped and the city itself was expanding with the surrounding hills transforming into residential neighborhoods.

The first transcontinental railroad joining the eastern and western halves of the United States, has just been completed; two years prior (1869). It is at this juncture, that the City of San Francisco declares its interest to honour and celebrate the 50th anniversary of the 1821 Greek revolution; a country so far away and with less than half land mass that Greece currently occupies.

READ MORE: Letters of Lambros Indares: How the grandson of a commanding officer of the 1821 Revolution shed light on the ‘Cretan problem’

The newspaper clipping was found in Lambros’ notepad, in which he would collect memoirs of his journeys to various parts of the world during his 15-year absence from Greece: London, Melbourne, San Francisco, Nicosia. Born at Trieste in 1838, Lambros obtains his American citizenship in 1870 in San Francisco soon after his arrival and following a six-year residency in Australia.

Lambros, the grandson of Dimitrakis Indares, commanding officer of the insurgent forces from Livartzi Kalavryta, already carries within him anguish for Greece which he had articulated in four letters to The Argus newspaper in Melbourne in 1867. Most likely Lambros’ letters were the first published in Australia authored by a Greek. The letters focus on the negligence of the Great Powers in the face atrocities committed by both the Turkish and Egyptian Ottomans against the Cretan population during the Cretan Revolt.

In San Francisco, he endeavours to establish himself as the owner of a small business, which according to the city’s annual commercial directory sold fruit, cigars & tobacco. As to how many of his compatriots resided in the same city [San Francisco] as Lambros, one can only speculate, considering that in 1880 approximately 2000 Greek immigrants resided in all the United States.

“As I walked out this noon I observed an unusual fluttering of flags, conspicuous among them the pale blue and white of Greece.” This is how Imogen Lee commences her report in the “Grass Valley Morning Union” dated April 9 1871. Her reference to the Greek flags seems to confirm the broad public response to the Greek Consul’s prompting which the newspaper clipping refers to.

Judge George Fisher (Djordje Sagic) was born in Hungary in 1795 of Serbian parentage and is considered the first immigrant of Serbian ancestry in America. A polyglot at the age of fifteen, he abandoned his theological studies to join the first Serbian uprise against the Ottomans under the command of Karadjordje.

After the defeat of the uprise, his independent spirit brought him to the United States, where he decisively became involved in geopolitical issues of the 19th Century: the Mexican war of independence against the Spanish Empire, the independence of Texas and of course the independence of Serbia. He became actively involved in many aspects of social life as far as Panama and finally found himself in San Francisco, where between 1860-1870, he undertook significant positions in various civic and administrative posts and acted as the Consul for Greece during the last three years of his life (1870-1873).

The Russian Bishop Johannes (Mitropolsky) was born in Kaluga in 1836 and was the first consecrated Bishop of the independent Dioceses of the Aleutian Islands and Alaska. Using as a motive a request made by the small Orthodox migrant community of San Francisco for a priest in 1868, he saw the opportunity to convey the message Christian Orthodoxy throughout the United States.

In 1870 he sought permission from the Russian Holy Synod to elevate the Alaskan mission to an independent Diocese with San Francisco as its base. In 1874, Bishop Mitropolsky, will jubilantly celebrate the relocation of the new Orthodox Cathedral of Saint Alexander Nevsky to the ‘Russian Hill’ on Pierce St San Francisco.

In 1871 however the headquarters of the Diocese remains at the same Church at which the 50th Anniversary of the 1821 revolution divine liturgy took place. The city’s guide mentions that the Greek-Russian Church was founded in September 1867, dedicated to Saint Alban the first British Christian martyr.

All the names of Priests and the committee of the Church are Slavic. The Russians have the upper hand as they are considered the more established and largest Christian Orthodox community in the city.

Most likely Russia’s desire to colonize the continent had subsided as a consequence of having sold Fort Ross and Alaska and its relationship with the United States was excellent. What unified the two nations was the common competitiveness in the sea against the dominating English navy.

The Russian warships were welcomed at the US ports on both sides of the coast. The three-month tour by Grand Duke Alexei Alexandrovich of Russia, son of the Tsar Alexander II, to 34 US cities which commenced in November of the same year will capture the public’s attention. The young son of the Tsar Alexander II of Russia will even experience a buffalo hunt with the famous “Buffalo Bill” Cody.

As to whether the protagonists of celebrations were well familiar with each other, it is certain that Lambros, the grandson of the insurgent commanding officer and the Serbian Independence fighter who fought under the command of Karadjordje as well as the Russian Church leaders had more in common than just their religious affiliation.

The principles of national sovereignty do not only inspire these three individuals but also the host nation. The independence of Serbia, at that time was very recent considering it was gained with the withdrawal of the Ottoman troops from the Principality of Serbia a few years prior in 1867.

As for the contents of Lambros’ celebratory speech at the San Francisco Municipal Court room it would appear appropriate in this instance to borrow a paragraph from Indares’ first letter to The Argus newspaper four years prior:

“As a Greek myself, I may presume to be in a position to say that, whether they are Cretans, or Thessalians or Epirots, fighting against tyranny, it is for the sole object of their sacred liberty, and not to suit any other nation’s political views. And if the small comer of liberated Greece has any ambitious aspirations, they are to set free from slavery her sighing sister provinces, who look upon her as the polar star to lead them to their emancipation”.

With so many canons fired, as reported by the “San Francisco Morning Call” newspaper article, the city would have shaken from one end to the other. Even the most uninformed would have learnt for who the celebrations were for. Imogen Lee, at the conclusion of her article slows the tempo and retraces the centuries of Greece’s history with verses from Lord Byron’s poetry and sheds a tear of reflection in memory of the poet who loved, sung and died for the “Isles of Greece”.

A hundred and fifty years later, our own generation, often seems uncomfortable when confronted with its historical past, preventing us from fully understanding our place in the complex world that surrounds us. It is essential to endeavour at some stage to seriously converse with our ancestors and especially with ourselves. We need to reflect and re-examine the notion of independence and view it not as a defensive moat, or as ideologically oppressive, but as the liberation from the tyranny of fear.

Dimitris Indares is a film director from Patras. This article was first published in the newspaper “Epilogues- Pelopónnisos”. It was translated by Costas Markos, a board member of the Greek Community of Melbourne. References: 6 April, 1871 issue of the San Francisco Daily Morning Call ; Helen Zeese Papanikolas, “Early Greek Immigrants’ Utah Historical Quarterly V. 22 #2; Newspaper: The Argus, date 21 March 1867; Poem by Lord Byron