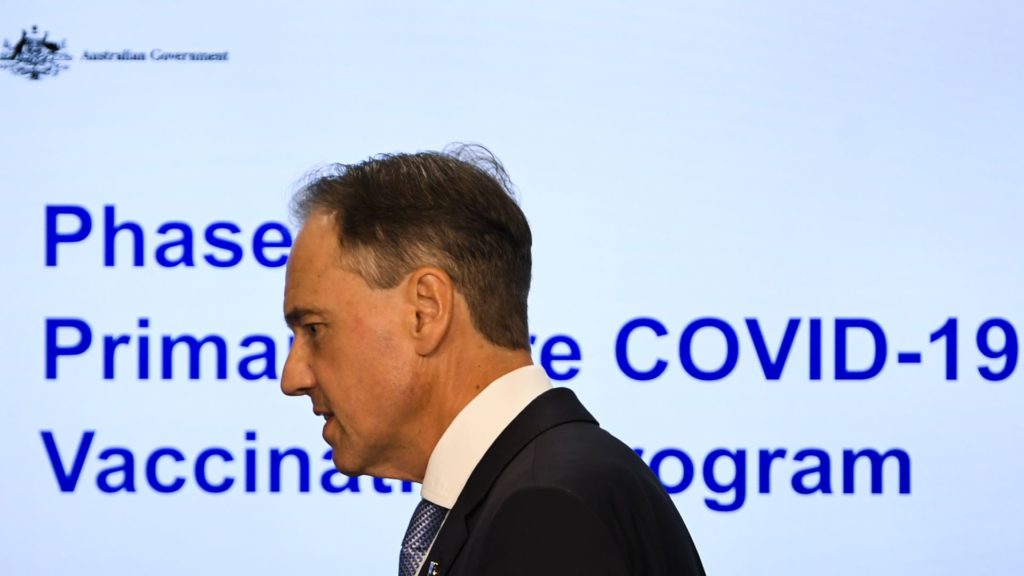 Australian Health Minister Greg Hunt arrives to speak to the media during a press conference at Parliament House in Canberra. Photo: AAP/Lukas Coch

Patients were put on hold as GPs dealt with hundreds of calls in NSW after 1,104 practice names were listed as available for Phase 1b of the AstraZeneca COVID-19 vaccine rollout.

Six million people were eligible to get the COVID-19 vaccination from Monday, however needed to book an appointment in order to do so. Many GP clinics were taken by surprise as phones started ringing off the hook.

Sue Kilazoglou, from Chipping Norton in Sydney, told the ABC that she contacted two practices near her dental office workplace.

“I checked to see if I was eligible straight away, but the GPs listed were a bit exasperated with my call,” Ms Kilazoglou said.

“I knew it would be too good to be true. There’s no way it could be that simple.

“The poor staff were frustrated; they were getting calls all day about this and had no idea.

“I would say to the government don’t put this stuff out prematurely if you’re not ready to follow through. Just be realistic.”

Australian Medical Association president Danielle McMullen said doctors were disappointed by the lack of communication between levels of government.

Dr McMullen said the process has been “frustratingly slow” and the “response has been of a bit of chaos, we’ve had phone lines ringing off the hook, confused patients and confused doctors”.

Queensland health authorities reported that four people experienced anaphylaxis within 30 minutes of receiving the first dose of the AstraZeneca vaccine. Another case was reported in Western Australia.

The Therapeutic Goods Administration (TGA) to announce a comprehensive review of coronavirus vaccine data to confirm the rate of anaphylaxis observed in Australia was consistent with the expected rate.