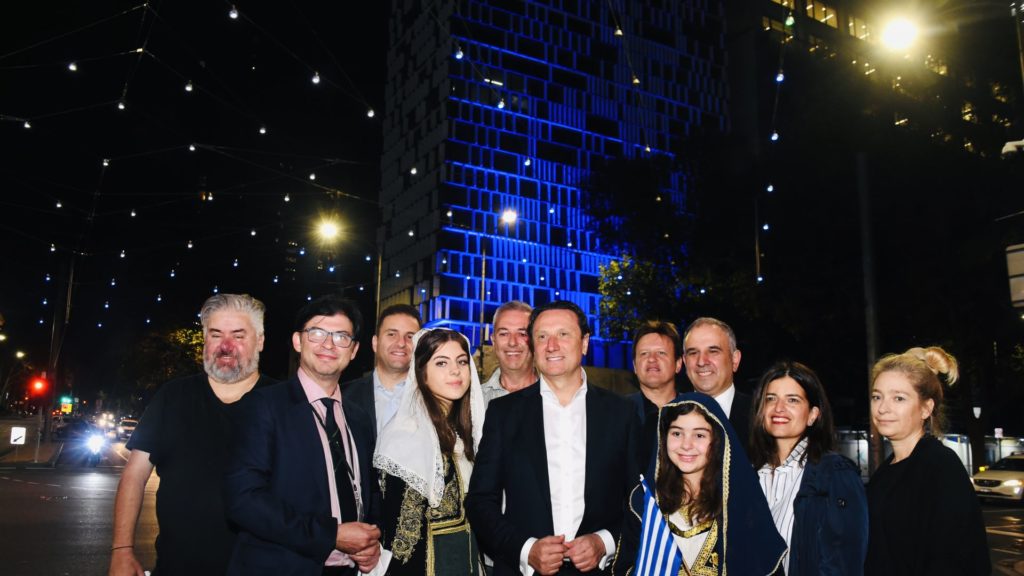 Members of the Greek Community of Melbourne stand opposite the Greek Centre on Lonsdale Street in Melbourne which will be lit up with blue and white colours of Greece until next Tuesday. Photo: Con Deves

The Greek Centre in Lonsdale Street, Melbourne, has been lit up in blue and white in anticipation of the 200th anniversary of Greek independence celebrations on Thursday, 25 March.

The Greek Centre’s blue and white visuals precede the lighting of other important buildings in Melbourne with the national colours of Greece on Thursday. These buildings include: The Old Treasury Building, Immigration Museum, Royal Exhibition Building, Bolte Bridge, Citylink Soundtube and Flinders Street Station.

For the Greek Centre, members of the board of the Greek Community of Melbourne (GCM) drew from their own funds to pay the $5,000 needed to light up the building in the heart of the city’s CBD.

Five members of the community paid for the lighting of the building, he said.

The president of the GCM, Bill Papastergiadis said lighting the 15-storey building in the centre of Melbourne would help to convey to the wider Australian community the heroism and resistance of the people of Greece in 1821.

“The lights, which will be on until next Tuesday, also highlight the Greek influence on civilisation,” Mr Papastergiadis said.

Five members of the community paid for the lighting of the building, he said.

READ MORE: The world set to be illuminated in blue and white for Greece’s Independence Bicentennial