Unbeaten during the season, the Hawthorn Spartans well deserved their Premiership win 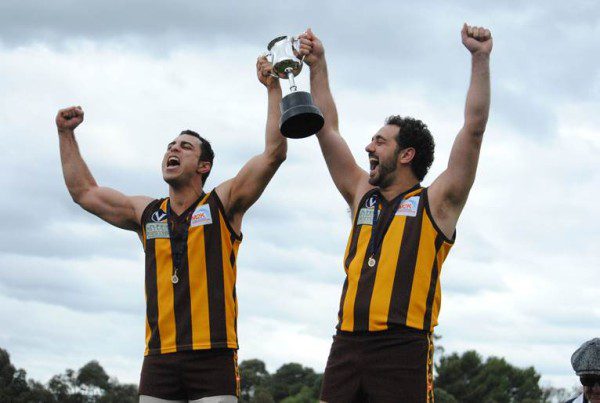 The Hawthorn Spartans Aussie rules club finished off an enormous year of straight victories to win the 2013 grand final. The Spartans were in the end too good for Ormond and ran out 38 point winners last Sunday.

The second quarter was more of an arm-wrestle for the first ten minutes as each side shared the attack but both sides were inaccurate kicking behinds. It was towards the last five minutes of the quarter that the Spartans turned on the pressure and managed to break the game open to score three very quick goals and go in at half time better than seven goals ahead.

After the long break everyone expected to see the Spartans forge ahead, however Ormond had other ideas. Physically stronger than the Hawthorn side Ormond started to play the long kicking game, which found some Spartan players constantly out of position, providing the opportunity for the Ormond forwards to capitalize with four unanswered goals bringing the deficit down to 24 points. The Hawthorn side then steadied in time-on to turn the tide and score a major themselves before the siren to be 30 points in front at the last break.

The final quarter was beginning to look like an arm-wrestle again, however this time the Spartans resurrected their run and spread game and completely over ran Ormond by scoring two goals in the first half of the last quarter. Consolidating on their lead the Spartans played a steadying precision pass keepings off control football to ensure their first ever premiership win by 38 points to the delight of their supporters and sponsors.

Following their emphatic premiership victory, the Hawthorn Spartans have been promoted to the Section One competition in 2014.

If you missed the Grand Final celebrations and wish to get a second chance to celebrate with the team in their inaugural premiership victory you can participate in the team’s fully catered Best and Fairest count on Friday night 27th September (AFL Grand Final eve) at Kinisi, 560 Church St, Richmond, VIC. To book your place at the 2013 Premiers Best and Fairest count, call George on (03) 9553 1511.