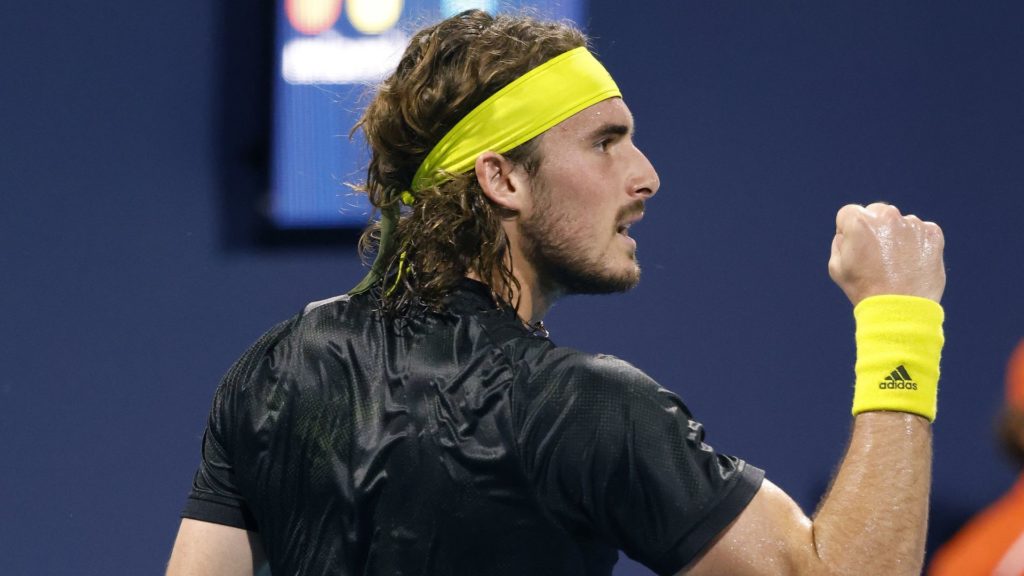 Greece’s tennis superstars Stefanos Tsitsipas and Maria Sakkari have been wiping out their competition in the Miami Open.

The no 5 seed blazed through his first two rounds, beating Bosnian Damir Džumhur and Japan’s Kei Nishikori before knocking out Lorenzo Sonego 6-2, 7-6.

Tsitsipas has entered an interesting season of tennis as Rafael Nadal and Roger Federer withdrew from the tournament due to injuries, whilst Novak Djokovic decided against making the trip from Serbia.

The first round saw him collect a seemingly breezy win against Džumhur, finishing off on 6-1, 6-4.

“I created a lot of opportunities with my serve — I wasn’t rushing at all, finding the right angles and executing it perfectly,” Tsitsipas said in a post match interview.

“Even with my second serve I felt like I did a lot of damage, not giving him a chance to press first and apply pressure with his shots.”

READ MORE: Tsitsipas’ journey from the courts of Glyfada to the Grand Slam stage

“I tried to play sticking on baseline and I was able to play that way in the second set, but it was physically tough and I had no room anymore, couldn’t focus at the beginning of the third set. Sometimes I also rushed in long rallies, couldn’t play with enough perseverance,” Nishikori said post match.

Earlier today Tsitsipas fired 20 winners and avoided a break point across the whole match against the 24th seeded Italian.

The young Greek came off the court pleased with his performance, noting he was “playing well, feeling well, and enjoying these moments on the court” during his post match interview on court.

“I’m thrilled to be playing the way I’m playing. I’m having a great impact with my game so far this week, so it’s important for me to capitalise [on] that…Each single opponent has been a separate challenge, and I’ve been managing to find solutions against them. It’s important for me to have matches like this,” he said.

Tsitsipas will be prepping for his first Miami Open quarter-final, going head to head against Poland’s Hubert Hurkacz.

Sakkari also impressed on the court in her first three rounds, starting of by knocking out Dutch Arantxa Rus 6-2, 6-3 before showing Russia’s Ludmilla Samsonova the door with a 6-0, 6-1 match.

The 23 seed really showed off her skills, advancing to the quarter finals after her 6-4, 6-2, 7-6 stand off with America’s Jessica Pegula.

Three consecutive breaks gave Sakkari a 3-2 lead in the first set, before snagging the win.

Pegula flipped the script in the second set, taking control and breaking Sakkari three times to tie up the match.

The third set saw an unrelenting battle between the closely seeded tennis stars.

Sakkari saved five match points during a marathon 5-4 game, going on to save the sixth in the decisive tiebreak.

The deciding match was neck in neck, as Sakkari took an early 3-1 lead, however Pegula fought back swiping four straight games, serving for the match at 5-3.

The game continued with a mind boggling nine-deuce game, but Sakkari was able to get back up to 5-5 with a backhand winner off of a dropshot.

The 25-year-old continued dominating the game, screaming with delight after slamming down her final winning shot.

“I always like to compete and win for my country… I’m super proud I’m Greek!” Sakkari said on-court after her win.