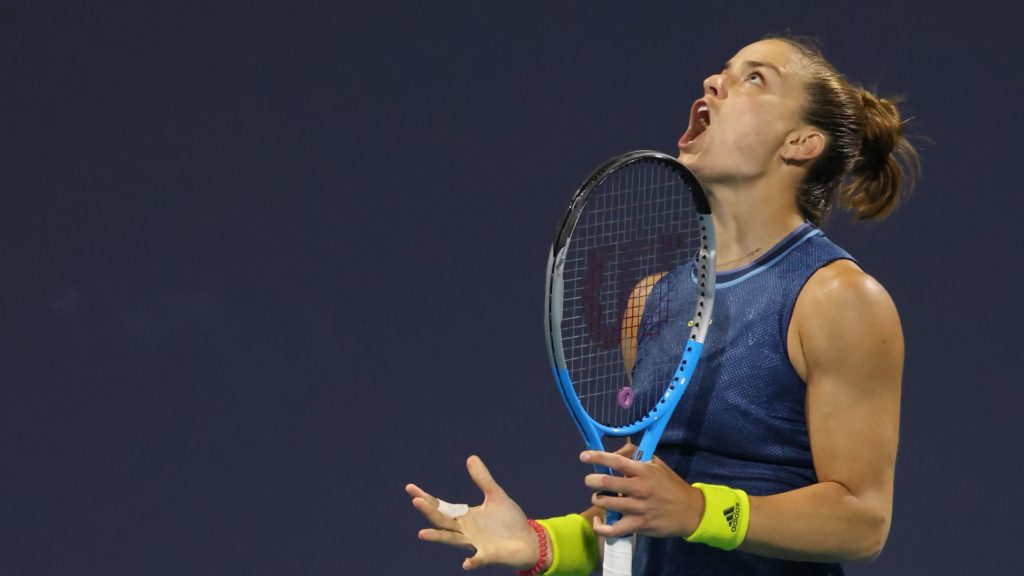 Maria Sakkari of Greece reacts after missing a shot against Bianca Andreescu in a women’s singles semifinal in the Miami Open at Hard Rock Stadium. Photo: AAP via Geoff Burke-USA TODAY Sports/Sipa USA

No.8 seed Bianca Andreescu advanced to her first final since winning the 2019 US Open with a thrilling three-set semifinal win over No.23 seed Maria Sakkari.

In a semi final match that was packed with drama throughout, the No.8 seed came out victorious against No.23 seed Maria Sakkari, 7-6(7), 3-6, 7-6(4) in two hours and 42 minutes to advance to Saturday’s Miami Open final.

Andreescu will look to add another big title on North American soil to her resume when she takes on World No.1 Australian Ashleigh Barty, the winner of the last Miami event played in 2019, for the first time.

Buoyed by the momentum from edging the opener, Andreescu opened up a 3-1 lead in the second set, breaking serve at 1-1 as Sakkari served up a double fault. Undaunted, the Greek flipped the script by playing relentless, physical tennis from the baseline, and secured five straight games and send the match to a final set.

Sakkari was the first to break serve in the decider, but her 4-2 lead soon became a 5-4 deficit as Andreescu refused to give in. Nonetheless, a love hold and a break from 30-0 earned the Greek an opportunity to serve for the match, and a place in her biggest career final.

She’d never get to match point, however, as Andreescu broke serve to love, and built a 6-2 lead in the tiebreak to secure a fourth three-set victory in five matches this week.