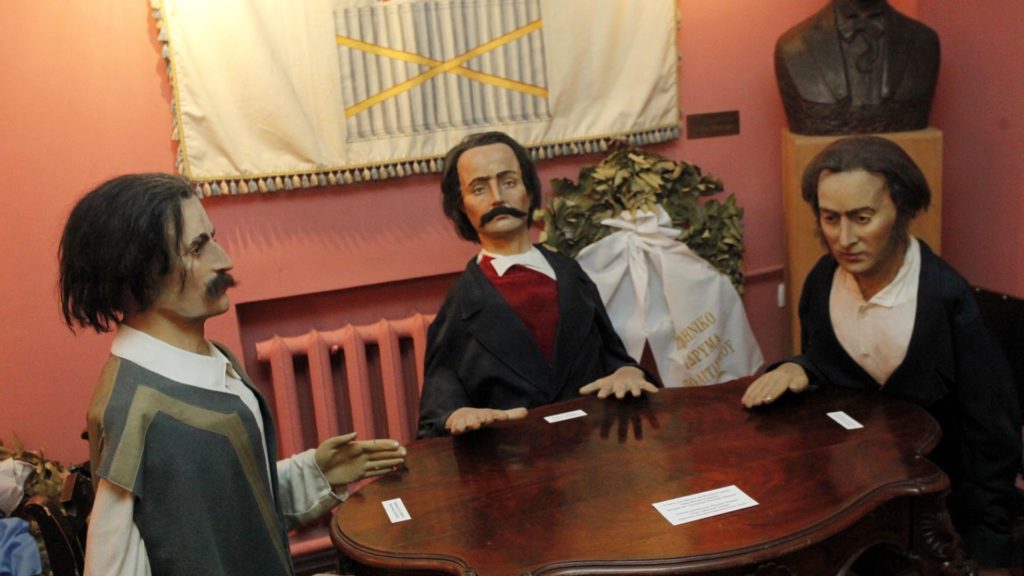 Snapshot from inside the building where the Filiki Etairia was created. Photo: Eurokinissi/Christos Bonis

It matters not a bit that Theokleitos Polyeidis, the monk who composed a set of prophecies under the pseudonym of Agathangelos, predicting the rise and regenesis of the Greek people, probably meant the Germans, when he prophesied that the “blonde nation” would descend from the North to save Hellenism.

In the popular imagination, the blonde Nordic saviour was Russia and it was to Russia, that Greeks looked for deliverance. Sure, the western world may admire Greece’s classical heritage and express the pious hope that a renascent nation would espouse the democratic and other ideals so revered by the West, yet it was from Orthodoxy that the vast majority of pre-Revolution Greeks derived their cultural identity and value system. As such, Russian philhellenism, which encompassed both the classical and Byzantine facets of the Greek experience was much more nuanced and balanced.

Modern Greek scholars have made much of the fact that Tsar Alexander of Russia did not endorse the Greek Revolution. With Russia still recovering from the depredations of Napoleon’s invasion, the idea of a popular uprising was alien to his conception of the nature of autocracy of his empire and he abhorred uprisings based on national identity, fearing that if encouraged, especially among the many subject peoples of Russia, this would lead to the dissolution of the Empire. Such revolts Russia did manage to foment in Greece from time to time, such as the failed Orlov Revolt, seemed mostly to take place within Russian strategic action against the Ottomans, rather than intended to create an independent Greek state. Indeed, Catherine the Great’s “Greek Plan,” of conquering Constantinople and placing her grandson upon its throne envisaged, at its most audacious, a Greek people “liberated” under the rule of the Tsars.

Yet it would be wrong to consider that all the Greeks constituted for Russia, was a pawn in their broader strategic aspirations. Catherine the Great not only gave colonies in southern Russia, newly conquered from the Ottomans, their ancient Greek names, but also encouraged beleaguered Greeks seeking equality and security, to settle there by offering citizenship, employment prospects and a ten year immunity from taxation. It was this influx of Greek migrants along with increased mercantile opportunities for Ottoman Greeks who after the treaty of Küçük Kaynarca, were allowed to sail in Ottoman waters flying the Russian flag, that created the requisite level of affluence among Greeks in Russia that led them to conceive of the plausibility of Greek freedom.

It is for this reason that the Philiki Etaireia was formed in Odessa by three expatriate merchants, a fact known to the Tsarist Secret Police, which was also aware of the extent of funding it received by affluent Greeks in Russia, as well as the Russian nobility. Despite this, the Russians took no steps to dissolve the seditious group. Tsar Alexander was also aware of his foreign minister Ioannis Kapodistrias’ championing of the Greek cause, even though Kapodistrias constantly told would be Greek revolutionary leaders such as Ypsilantis and Mavromichalis that Russia could not openly endorse Greek independence. When Ypsilantis left Russia and crossed over to Moldavia in order to commence the Revolution, it was Kapodistrias who was asked to draft a declaration in Tsar Alexander’s name denouncing Ypsilantis for abandoning “the precepts of religion and morality”, condemning him for his “obscure devices and shady plots”, ordering him to leave Moldavia at once and announcing that Russia would offer him no support.

Notwithstanding Russia’s political stance, the Greek cause aroused great sympathy among all sectors of Russian society, with celebrated poets such as Pushkin penning verses in support of Greek freedom, staunch advocates of tsarist autocracy and liberal reformists all expressing concern for the plight of the Greek people. It was the suffering of the Greeks during the Revolution that caused Russian Philhellenism to assume the form of a humanitarian imperative.
The catalyst for the relief drives, co-ordinated by the Russian government, and Church, proved the execution of Ecumenical Patriarch Gregory V, a man revered in Russia. Horrified by the brazenness of this act and reports of the mass slaughter of clerics and Orthodox Christians in Constantinople and Smyrna that took place soon after the Revolution broke out, Tsar Alexander ordered Kapodistrias to draft an ultimatum accusing the Ottomans of breaking treaties and of threatening “to disturb the peace that Europe has bought at so great a sacrifice”. The ultimatum ended:

“The Ottoman government has placed itself in a state of open hostility against the Christian world; that it has legitimized the defence of the Greeks, who would thenceforth be fighting to save themselves from inevitable destruction; and that in view of the nature of that struggle, Russia would find herself strictly obliged to offer them help because they were persecuted; protection, because they would be in need of it; assistance, jointly with the whole of Christendom; because she could not surrender her brothers in religion to the mercy of a blind fanaticism.”
=

Russia subsequently broke off relations with the Ottoman Empire.

Within weeks, over a thousand Ottoman Greeks fleeing the fighting and persecution were crossing the border into Russia on a daily basis. By order of the Tsar, the border was kept open, providing a refuge for tens of thousands, in a manner unthinkable in modern times. According to the research of historian Theophilus Prousis, in July of 1821, the Tsar approved the commencement of a subscription campaign in order to raise money for the Greek refugees, most of whom sought succour in Odessa and Bessarabia. Led by Prince Alexandr Golitsyn, this campaign organised housing and food for the refugees, as well as suitable employment. The Tsar himself contributed 150,000 roubles for this endeavour.

Prince Golitsyn’s relief effort was particularly effective owing to the fact that he was able to make Greek relief fashionable among the nobility, to which he belonged. The Dowager Empress Maria Fedorovna contrubted 15,000 roubles from her personal funds for the refugees, while Prince Adam Czartoryski, Curator of Vilna University not only provided 2,000 roubles but also organised fundraisers from university staff, students and supervisors.

Prince Golitsyn also compelled the Russian Church to give generously, stressing its debt to the Greek people as it was from them, as he contended that the Russians borrowed: “the sacred learning of the Gospel, the teaching of love and mutual help.”

To intellectuals, thinkers and magnates, Prince Golitsyn stressed not only the Orthodox connection, which was the element that most tugged upon Russian heart-strings, but also civilization’s debt to the Greek people:
“Without a doubt, the success of such an… undertaking will justify the expectations of friends of humanity who desire to render help to the sons of that country which fostered enlightenment in Europe and to which Russia is even more obliged having borrowed from it the enlightenment of faith, which firmly established the saving banner of the Gospels on the ruins of paganism.”

Refugee clergymen were particularly looked after, receiving monthly stipends, ranging from 45-75 roubles for priests to 170 roubles for Metropolitans. In February 1822, for example, the head of the local relief assistance committee in Odessa distributed 25,000 roubles to 441 Greek refugee clergy and nuns.
Even Muslim minorities were co-opted in raising funds for the Greek refugees. In Georgia, the local Exarch gathered funds not only from the local clergy and army but also, from the sizeable local Muslim community.
News of the Massacre of Chios in April 1822 and the mass enslavement of women and children in Kassandra and Ayvali galvanised all levels of Russian society. This moved the Tsar to order Minister of the Interior Kochubei and Prince Golitsyn to organise an Empire wide appeal so that funds could be raised in order to ransom the unfortunate captives from their slavery, guided behind the scenes by Kapodistrias and refugee clergyman Konstantinos Oikonomos. Prince Golitsyn in turn invited all Russians: “to extend a helping hand to our co-religionists who are saddled with all the despondencies of captivity and are threatened to be cut off from the Church of Christ.”

There was a clandestine element to this operation. In a letter to Prince Golitsyn in November 1822, Oikonomos write of the wisdom of keeping knowledge of this “new deed of Ottoman benevolence” from the Ottoman government. Appeal proceeds were sent secretly to commercial agents in the Ottoman Empire, with confidential instructions to apply them for the ransoming of Greek slaves. Many of these slaves once ransomed, found their way to Russia.
Attempts to resettle Geek refugees, such as that by Count Orlov-Denisov, permanently in southern Russia failed however. Although they were provided with clothing and shelter, the majority of these refugees were townsfolk who were unused to the farm work the Russians anticipated they would perform. Most did not want to settle permanently in the region and were merely biding their time until the war was over, while it was observed of those that did stay, that they had “a tendency to work in the Asiatic fashion.”

As a result of monthly donations from the Russian Imperial Treasury, between January 1822 to August 1830, some 1.5 million roubles were transferred to local authorities for the assistance of Greek refugees. Although the Russian public remained concerned about the plight of Greeks and sympathetic to the fortunes of the newly constituted free Greek state, Tsar Nicholas, Alexander’s successor eventually terminated refugee aid in 1830, believing that the end of Ottoman-Greek conflict would permit Greeks to return to their former homes or to migrate to free Greece.

The unprecedented manner in which public and state rallied around the Greeks at the time of the Revolution was considered a seminal event in Russian social history, with nineteenth century Russian historian Dmitri Bukharov observing: “Up until that time, not one popular revolt, no matter where it took place, aroused as much general attention and intense sympathy as the revolt of the Greeks.”

Although Russia would thereafter play a complex and not always stabilising role in the fortunes of Modern Greece, Russian humanitarian aid at the time of the revolution cemented already existing ties of mutual affection between the two peoples. These ties of affection and indeed the generally unfulfilled expectation that Russia should or will always come to the aid of Greece, endure to the present.