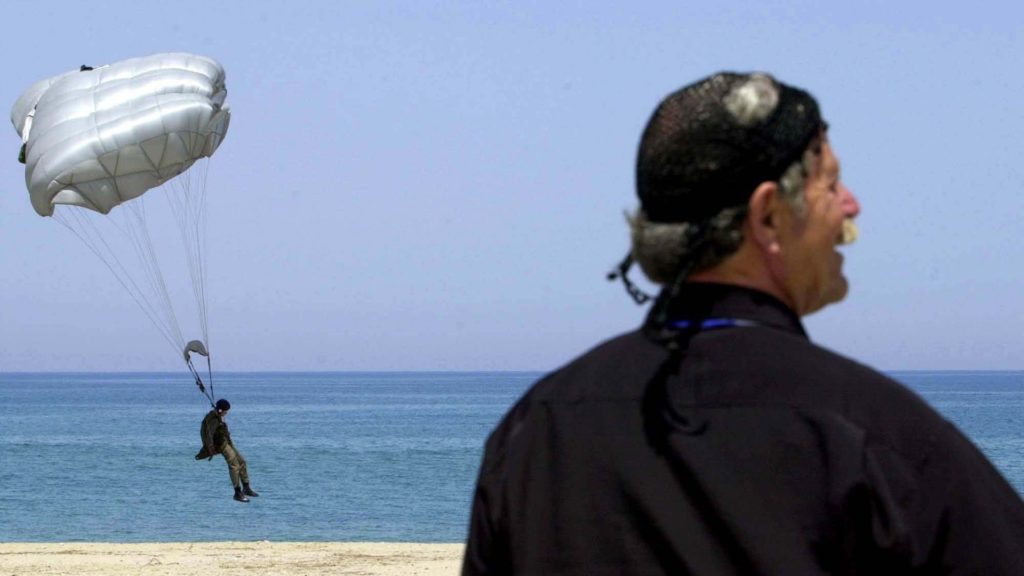 A Cretan men dressed in traditional costume watches a parachuting exhibition staged by Greek special forces on a beach in Rethymnon, alongside a statue dedicated to 110 residents executed by Germans in May 1941. Photo: AAP via AP Photo/Thanassis Stavrakis

An organisation calling itself The European Paratroopers Association, or EAP, purportedly planned to hold a celebration of the Battle of Crete in Chania in May to mark the 80th anniversary of the German invasion of Crete in 1941. But resistance is stirring against plans of the EAP, a group which normally runs courses and holds events for those who enjoy parachuting as a sport.

German paratroopers dropped into Crete in May 1941, an event which right wing extremists want to commemorate that in situ.

The invasion of Crete was meant by Hitler to be just a pushover that would serve as a base for their further invasion of Mediterranean countries and ultimately the invasion of Russia.

The online portal Dimokratia News called the proposed gathering it a “celebration of dishonour”. EAP, which cites an Italian address, later took the call from its website.

But the EAP poster Greek media continue to show is unequivocal. “It’s been exactly 80 years since the elite troops of the Third Reich jumped into Crete and conquered the island. We will never forget their heroic courage,” it says. The fallen would be honoured from 17-23 May.

READ MORE: Events commemorating the 80th anniversary of the Battle of Crete

Greek media report that the organisation offered trips to Crete for 365 euros, inclusive of visits to German drop zones. They cite authorities as alarmed due to organisers’ plans without the Cretan hoteliers.

On 20 May 1941, following heavy bombardment, the German paratroopers (Fallschirmjäger – literally parachute hunters) dropped on to the biggest Greek island. There were heavy casualties among Greek, British, Anzac troops and German combatants. Evidence of that remains at a cemetery for almost 4,500 German troops at Maleme on the north coast.

The Battle of Crete was the first time German troops encountered real resistance from ordinary citizens in their march across Europe.

Fierce resistance of Cretans – some of them women, armed with brooms and shovels — meant that many of the German parachutists were massacred as they floated to the ground. The invasion was resisted so well by Cretan civilians the Nazi troops were bogged down there so long that the planned invasion of Russia was put off until the wintertime.