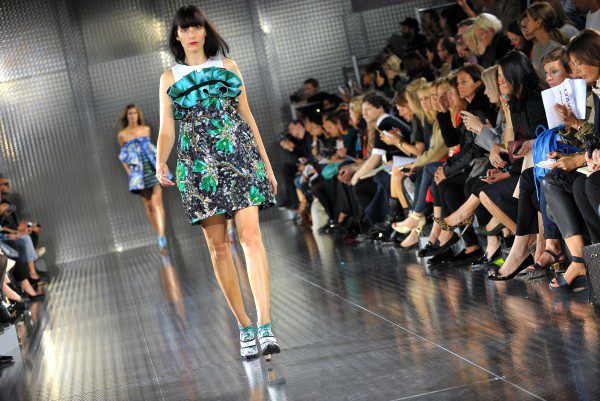 Greek-born, London-based fashion designer Mary Katrantzou has shown off her new collection at London Fashion Week. Known as the queen of the prints, Katrantzou lived up to her reputation and brought out colourful but matching dresses, with hues of green, blue and purple. This time, the 30-year-old designer’s collection was based on the art of the shoe, bringing out patterns with brogues and laces printed on. It also featured blown-up details of works created in the ateliers of celebrated French embroidery house Lesage.
“The placement of the prints was, as usual, immaculate,” noted www.style.com, while France’s online Elle edition defined Katrantzou’s take on Lesage as “charming”.
In 2012 Katrantzou was one of three nominees in the Designer of the Year category at the British Fashion Awards, while in 2010 she earned the Swiss Textiles Award. She visited Australia this year as a guest of honour to present her Autumn/Winter collection at the Melbourne Fashion Festival.