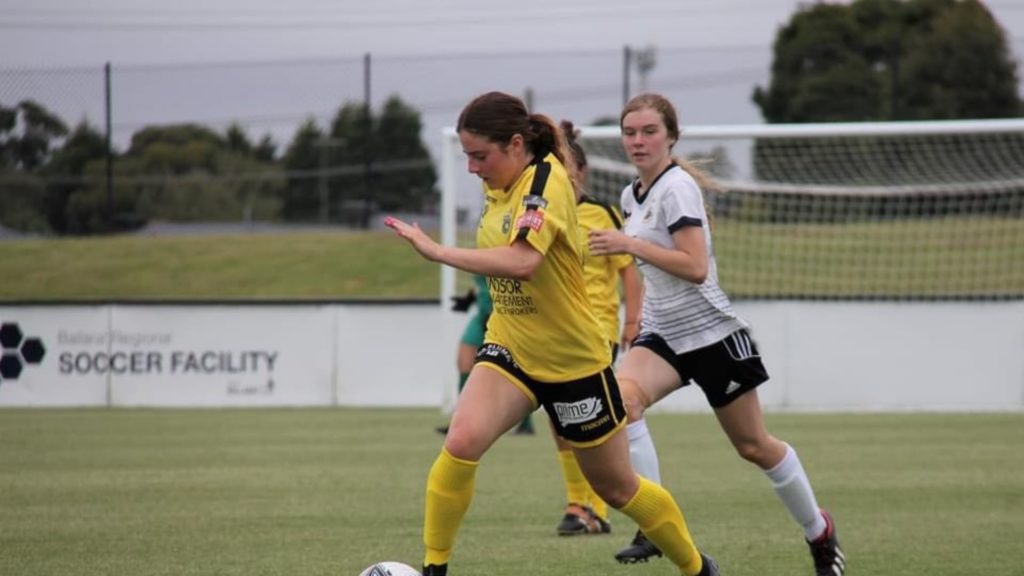 Cleo Taliadoros was always drawn to the little black and white sphere getting kicked around the green football pitch.

As a youngster she found herself on a team at the age of seven, before hanging up her boots only a year or so later, but those boots kept calling her back.

The now soon to be 21 year old has now made her way to the NPLW in Victoria, playing her first proper season as a senior forward with Heidelberg United FC.

“I started playing at Brighton soccer club. I moved to South Melbourne before I moved to Heidelberg. I was at South Melbourne for four years and then I went to Bayside for a year and I only just started at Heidelberg. 2020 would’ve been my first season with them but we didn’t get to play for obvious reasons,” Taliadoros told Neos Kosmos.

The fresh Alexander recruit is also studying and double degree in Arts-Law whilst putting out her best work out on the field and has had some stellar support to make sure she doesn’t foul.

“My coach at Bayside in 2019 was Dean, he really made me believe in myself. My coach at the moment, they make me feel so much more confident than I was but I think over the whole 20 years it’s definitely been my parents who have been there after every really bad game and every good game,” she said.

“Every time I’ve been really disappointed in myself or happy, they’ve been there to support me and supporting me through juggling uni and soccer. I’m not always the most fun person when I come home but they still support me and always help me out. I don’t think I could juggle everything without them and my sister.”

Taliadoros talks about her excitement getting back out into the game, inspirational teammates and elevating women’s football.

I was drawn to football because my dad and godfather were involved and I could see an increasing amount of girls my age playing the sport. I really wanted to be involved and since then I’ve never looked back and been playing every day since I was 14.

It’s a pretty long ride for me to get to Heidelberg, I live pretty far away. In the car I have all my good songs on and before the game, before I leave, I get all my things organised.

I play as a full back, so there’s a few full backs that I like to watch. I watch 10, 15 minutes of YouTube videos of some full backs playing out or attacking, getting myself thinking about it. Once I get to the game I hang out with the girls and we hype each other up. I don’t really have any traditions.

Anything Chris Brown or Bryson Tiller or anything Drake.

I think the most difficult thing is the mental side of the game. You could have two weeks where you’re training and playing really well and then you could have one average, bad session which could just throw you off and deplete your confidence.

I really think the mental confidence and consistency part of the game is definitely the hardest because even though you have the ability to do all of this stuff, sometimes it just doesn’t happen for some unknown reason.

One of my highlights was my first 90 minutes of NPLW soccer, which was two weeks ago. It was a huge highlight for me because there were so many times when I was 17, 18, when I just thought that I would quit because I wouldn’t be able to get to seniors as I didn’t have the confidence at all.

To actually get put in the starting line up for an NPLW senior game was such a good feeling and it’s honestly been one of the best moments I’ve had. Personally my best moment so far has been with the team that I’m with now who are all amazing and being able to be a major part in that team in my first couple of years in seniors.

I cannot imagine my life without football. Even when I wasn’t playing, I was hearing things from my dad so it’s always been a part of my life. Since I’ve started playing, it’s just been the highlight and the most significant part of my week since I was 14.

I would look forward to training every single day and even now my whole life revolves around when I’m training, when I need to recovers, when I need to go to the gym, when I have my game. Sometimes I wonder what I would do if I didn’t have soccer and I literally have no idea what I would be doing.

I also wouldn’t have most of the friends I have now because I’ve met so many incredible people through the clubs that I’ve been at. I think it’s helped with my character as well. It’s taught me so much, especially playing with older girls when I was younger. You learn a lot from the older girls you play with, so I genuinely don’t know what I would be or what I’d be doing if I didn’t play football.

I learnt that I am really resilient and I don’t give up. So many times, I’m sure a lot of athletes go through this towards the nd of their teenage years, a lot of people quit or drop out once they finish school because they have uni and a job.

During that time my confidence was really low, I wasn’t performing or playing the way I really wanted and I thought about quitting so many times but I stuck it out through that. Even though every week I might still have a bad training session and get mad and upset at myself, I’ve never quit, I’ve never taken a training off, I’m there every single day.

I think that shows me that if I really want something I have to keep working at it and that’s what I’ve done and how I gotten my way now to Heidelberg.

I’m playing as a full back which I haven’t had much experience in so this year I really just want to learn from the players around me who have so much experience like Elly Torre who’s an incredible full back and Ellen as well. Then you’ve got players like Steph Galea and Sidney Allen, they just have so much to teach and so do my coaches. My coaches are amazing so I really just want to learn as much as I can about my position and playing senior football this year and then we’ll see what happens.

I guess something that people might not know is that I’m a huge family person and every free second I have I will spend time with my family, my cousins, my grandparents.

I’m really looking forward to just being able to play. There was basically a whole year where I still trained a lot but it’s so amazing and I’m just so excited to be back with my team who are just amazing. Being able to train and improve as a player.

Obviously we’re after results but I’m really excited to be back on the pitch in a senior environment. It’s the dream.

I think in terms of what I’ve been inspired by personally is a lot of girl in my team and throughout the NPL have amazing job and done difficult degrees whilst playing NPL and being so talented.

The full backs on my team, Ellen and Ellie, one of them is a lawyer, one of them is a psychologist and they both are so smart and play soccer and do everything. Taylor Schneider also has a degree. I think I want to inspire people and show them you can do both, even though it’s really hard and draining, it’s so possible to go to uni, and have a job and have a social life and be present and ready at every training and soccer game.

Maybe that we don’t train as hard or that we’re not as tough but the fact that women have to go through not being paid as much, not being recognised as much has made us even tougher. It’s a misconception that’s pretty disappointing but in the end I think it has made a lot of us stronger and really improves your character having to fight against the stereotypes that might be thrown our way, which they definitely have.

women’s soccer has improved so much and is improving so much and it’s incredible to see where it’s going to continue to grow, like the World Cup for example. My dad and I went to the women’s World Cup in 2019 and the standard was incredible.

It’s a great time to be involved in football especially as a woman with the support of Football Victoria and individuals such as Helen Tyrikos who has incredible ambition for women’s football in Victoria.