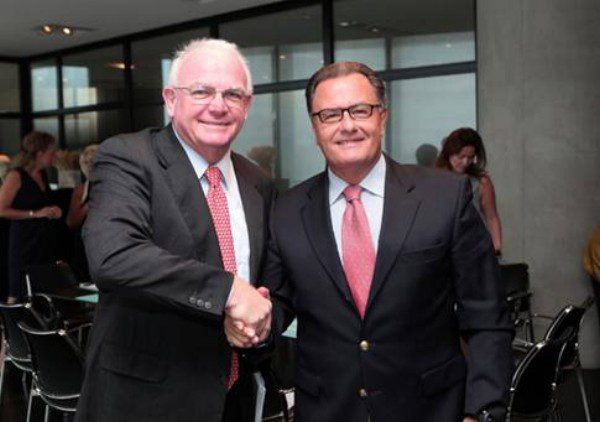 The Greek Government has reaffirmed its commitment to the campaign for the return of the Parthenon Marbles following the meeting between David Hill, Chairman of the International Association for the Reunification of the Parthenon Sculptures, and the Greek Minister of Culture and Sport, Panos Panagiotopoulos, held in Athens on 23 September.
The call for return of the so-called Elgin collection of Parthenon Sculptures, currently on display in the British Museum, has been at the heart of one of the world’s most celebrated cultural property disputes. In July this year, Mr Panagiotopoulos met with the Director General of UNESCO, Ms Irina Bokova, during which he asked Ms Bokova to bring her personal and institutional influence to bear and initiate formal bilateral discussions, with UNESCO serving as intermediary, with the British Government and (hopefully) the British Museum.
For many years, the UNESCO Intergovernmental Committee for Promoting the Return of Cultural Property to its Countries of Origin or its Restitution in case of Illicit Appropriation has wrestled with the issue of the Parthenon Sculptures and has tried, without much success, to bring both parties to the table for meaningful negotiations.
Mr Panagiotopoulos indicated that there is a pressing need for a common and coordinated strategy between the International Association, the various overseas committees and other culture-focused international bodies to maintain a sustained campaign for the sculptures’ return. The chairman of the International Association assured Mr Panagiotopoulos that all committees will support the Greek Government on whatever path it chooses to take.
The UNESCO Committee has met regularly over the past decade and on each occasion it has issued similar recommendations, including inviting the Director General to assist in convening the necessary meetings between Greece and the United Kingdom, with the aim of reaching a mutually acceptable solution to the issue of the Parthenon Sculptures. These all too familiar recommendations have failed to produce any real or meaningful dialogue despite UNESCO’s best efforts.
And why has this occurred? For their part, the British delegation (which invariably includes representatives from the British Museum) has consistently stonewalled at these meetings, repeatedly pointing out that the decision rests with the British Museum Trustees and asserting that the marbles tell a different story in London. The British Museum has tried to recast itself as a “universal museum” – as a museum of the world – and in its public relations spin it has referred to the sculptures as “objects” which are best exhibited in different locations (most notably London), rather than being reunited and viewed within the context of the Parthenon.
It is this attitude on the part of the British Museum that the Greek Government, through its renewed request for UNESCO intervention, has to overcome.
If this initiative fails, then the Greeks will need to consider alternative strategies, including litigation.
The various international committees will meet in Athens this month to discuss the current state and future direction of the campaign. The Culture Minister has promised to address the delegates on that occasion. It is hoped that a more positive outcome is within reach.