The net profit is estimated to be between $12-18 billion 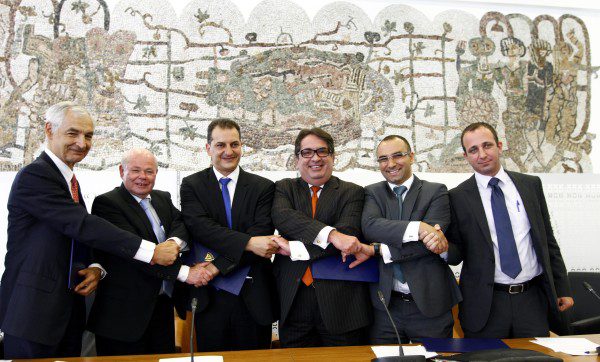 The Cypriot government, American based oil and gas company Noble Energy and its Israeli partners Delek Drilling and Avner Oil simultaneously announced last week the updated appraisal drilling results from Block 12, to the south of Cyprus.
The updated figures from the most recent appraisal drilling show that the offshore field holds between 3.6 trillion cubic feet (tcf) to 6 tcf of natural gas. “We anticipate additional appraisal activities are necessary to further refine the ultimate recoverable resources and optimise field development planning,” said Keith Elliott, Noble’s senior vice president, for its operations in the Eastern Mediterranean.
“The appraisal drilling results prove there are substantial recoverable quantities of natural gas in the Aphrodite field, with important production capabilities,” Energy Minister of Cyprus Giorgos Lakkotrypis told journalists. Lakkotrypis said that preliminary calculations on reserves of 4.5 tcf indicated a net profit for Cyprus of between US$12 billion to US$18 billion (between €8.8 billion and €13.2 billion) over a 14-year period, and gas with a gross value of US$50 billion (€36.7 billion) for Noble. But he said estimates were “very preliminary, considering uncertainties in the market”.
The energy minister said that the Cypriot government remains committed to the construction of a liquefied natural gas (LNG) plant on the island.
“Despite the lower quantities we announce today compared to those of 2011, the confirmed reserves affirm a particularly important reserve of natural gas,” Lakkotrypis said.
The reserves in Block 12’s Aphrodite field are the third largest in the Levantine Basin, which lies in the seas of Cyprus, Lebanon, and Israel. US based multinational oil and natural gas company Noble Energy also has concessions in Israeli natural gas prospects.
Noble’s Cyprus Country Manager John Tomich said the LNG project remained their “strategic priority in terms of commercialising the gas”.
“What we found was confirmation of world class natural gas,” Tomich said.
Cyprus and Noble Energy and its Israeli partners signed a memorandum of understanding in July with a view to jointly seeking investors for the LNG plant, estimated to cost up to €8 billion euros.
The aim is to agree on a special purpose vehicle by December, prior to securing an engineering procurement construction (EPC) agreement with a contractor to start works on the LNG plant by early 2016.
But for the agreement to go through, Noble would need to make a final investment decision.
Cyprus has signed contracts with the ENI/KOGAS Italian-Korean consortium for hydrocarbons exploration in blocks 2, 3 and 9 and with French TOTAL for blocks 10 and 11, all in its exclusive economic zone. ENI/KOGAS are expected to begin exploratory drilling in the third quarter of 2014, with TOTAL following suit in the first quarter of 2015, Lakkotrypis said.
Although authorities have said that natural gas is not a panacea for the island’s financial troubles, the discovery of natural gas bears hope for the mid-term. Cyprus came close to financial ruin in March, as it desperately tried to secure a 10 billion euro bailout.
It is noted that Aphrodite gas field is an offshore gas field off the southern coast of Cyprus located at the exploratory drilling block 12 in the country’s maritime Exclusive Economic Zone, located 34 kilometres (21 miles) west of Israel’s Leviathan gas field.
Noble Energy Inc. was the first to drill when awarded Block 12, after Cyprus launched its search for an underwater gas field in 2007.
Israeli firms Delek Drilling and Anver Oil and Gas Exploration signed an agreement with the Cypriot government earlier this year and acquired a 30 per cent stake in exploration rights for gas and oil off the southern shore of Cyprus. Both Delek and Anver own majority rights in Israel’s own mammoth gas discoveries – the Leviathan and Tamar fields off Israel’s northern coast – and the agreement with the Cypriot government was interpreted as heralding a “new era of Cyprus-Israeli strategic cooperation, with economic and political dimensions”.
Source: cyprus-mail