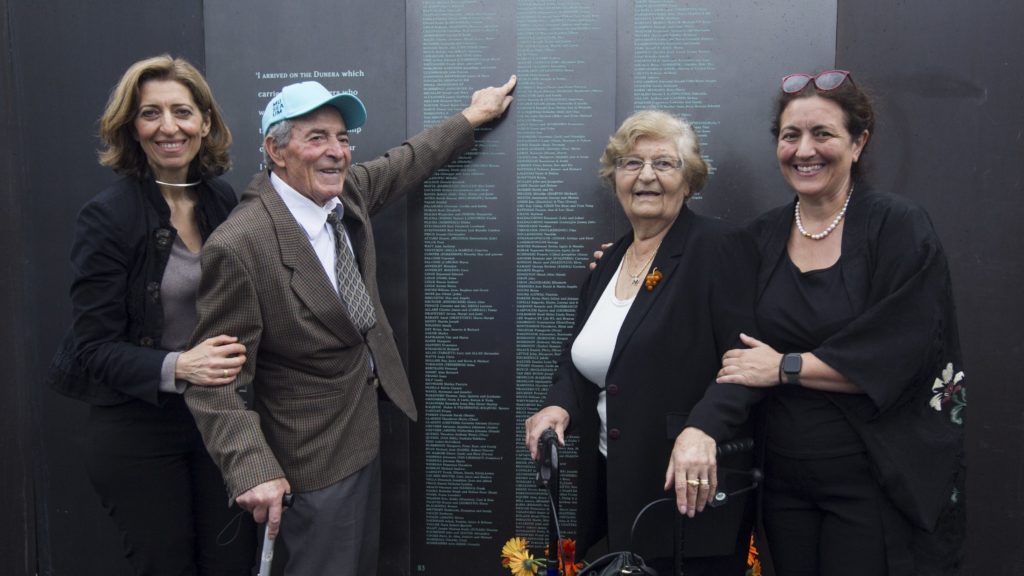 Electra, George, Helen and Fotini Manikakis celebrate their names on the National Monument to Migration in Sydney. Photo: Supplied

In recognition of the 200th anniversary of Greek independence, a group of Greek philanthropists and community organisations have collaborated to honour Greek migrants to Australia on the new National Monument to Migration at the Australian National Maritime Museum in Darling Harbour.

The museum has so far received $15,500 in support of the initiative from philanthropists including Bill Drakopoulos, Emmanuel Alfieris and from the AHEPA National Educational Fund Incorporated and the Daughters of Penelope. The individuals being honoured will be chosen by the Greek community in partnership with the Greek Welfare Centre.

Additional donations in support of the Greek Independence Bicentenary Project may be made to the museum.

Mr Drakopoulos said, “We are part of a long chain of proud Greek migrants who have forged new lives in our new home. We remain proud to be Greek and proud to be Australian. It is a great chance to honour those who came before us.”

“All Australians stand on the shoulders of our predecessors. We live in a beautiful country with peace and prosperity. And we owe a debt of gratitude to those that carved the original journey for us to follow,” Mr Alfieris said.

Museum Director Kevin Sumption said, “The museum has long recognised the important role of Greek migrants in the shaping of modern Australia and we are delighted to support this special initiative from the community to include more Greek Australians on the National Monument to Migration.”

Australia’s National Monument to Migration commemorates those who have migrated from countries around the world to make Australia their new home. The name of any person who was born overseas and settled into Australia may be registered on the monument.

The National Monument features over 30,000 names, including over 1,500 people born in Greece.

The museum requests a brief story about each person being honoured on the National Monument and publishes it on the museum’s website. The museum is amassing a selection of stories from these names; stories that, in turn, tell the story of modern Australia.

The museum is also accepting names for the next panels on the Monument and has announced a new fundraising initiative to support the honouring of new arrivals and refugees.

On Sunday, 21 March, the Governor General of Australia, His Excellency, General the Honourable David Hurley AC DSC elevated the status of the Welcome Wall at the Australian National Maritime Museum to become Australia’s National Monument to Migration.

The National Monument to Migration is situated on the northern promenade of the museum facing Pyrmont Bay and is historically near a place where many migrants arrived in Sydney.