Firewind headbang their way to Australia

Lead guitarist Gus G, famous for his time with Ozzy Osbourne, chats with Neos Kosmos about Firewind’s decade long career ahead of their Australian tour 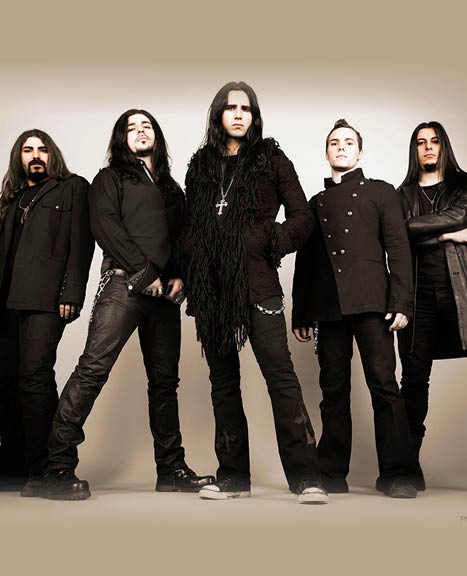 Greek heavy metal would be nowhere without Firewind.
‘Trend setters’ is an understatement for a band that has released seven studio albums in 15 years and become Greece’s first metal band to reach number one.
To begin to understand why the band has become such a heavy metal revelation, you have to acknowledge the person at the helm. Firewind is thanks to Gus G, Ozzy Osbourne’s former guitarist.
Gus is known for his mind bending fretwork and solos, something that metal head Ozzy Osbourne couldn’t turn down.
Booked for an audition, Gus blew the veteran away and was signed on the spot after just one jamming session.
That talent was seen in Firewind way before he hit it big.
The band happened by default, when Gus was studying music overseas in the United States. The young Thessaloniki raised boy was attending the prestigious Berklee College in Boston when he decided to record a demo under the name Firewind with some friends in an attempt to get his guitar skills on tape.
It worked, and Gus was getting knocks on his door. He was in fact hired by Nightrage, Dream Evil, and Mystic Prophecy, and for three years had to put Firewind’s prospects on hold.
In 2002, the band released their first studio album, Between Heaven and Hell.
“[We’ve] had a groundbreaking career for a metal band from Greece, paving the way for others,” Gus tells Neos Kosmos.
Now preparing for their first Australian tour, Firewind is gearing up for quite a unique audience. Although their international success, especially in the US and Japan, has seen their fan base grow exponentially, they’ll be able to get something of a home crowd in Australia.
With many Greek Australians tipped to show their support, it will be a humbling experience for the band who has tried a few times to secure a good promoter here.
They band was booked to play in April but preparations fell through.
“Indeed, it’s taken us years to finally be able to get a tour in Australia, but it’s finally happening and we couldn’t be more excited about it,” Gus says.
“We’re excited to meet our Greek friends Down Under.”
The band has worked hard on their seventh and newest album, Few Against Many, which coincidentally coincided with their 10 year anniversary in 2012.
In honour of the anniversary, Greece was treated to four exclusive live concerts, each with a different set list. Those shows were recorded for a live CD release this year.
The new album takes the band back to their heavy metal roots, and will feature heavily on the band’s Australian tour.
“[It] is a heavier album compared to the previous two we’ve done,” Gus reveals.
“There was more emphasis on the riffs, and the guitar in general.
“There are a lot of good songs which we’ve kept on our setlist, so that says a lot about the album’s strength.”
The band doesn’t like to repeat anything, but still stays true to its sound.
“We always like to add a few new elements into our music with each album.”
At the heart of the band is a thirst for creating interesting and unique music that doesn’t try to conform to the heavy metal genre.
The band describes itself as “melodic heavy metal” and regularly writes instrumental songs and bucks the trend by writing quite slow and piano based songs. And for their international fans, they’ve always sung in English.
Gus has an eye for talented musicians, and constantly updates the band with new blood.
He even takes the time to teach, and regularly compiles guitar clinics around the world.
The fans take note and really appreciate the band’s musical prowess when they see them live.
“We have lots of musicians in our audience I think and lots of younger players tell us we’ve inspired them to play,” Gus says. “That is mind blowing.”
It’s the preparation and detail that goes into a show that gives you an indication of just how much respect the band has for their fans and their job.
Warming up isn’t just about tuning up 10 minutes before the show. You’ll find Gus practicing for an hour and a half before he gets on stage, with no distractions and mostly silence.
“I just need my time to prepare for the show, exercise a bit, put on my stage clothes,” he says.
That’s why the band has such a good reputation for its lives shows. The adrenaline rush of being on stage is enough for the band to keep hitting the recording studio, and keep doing it all over again for another 10 years.
A decade-long music career is something not many musicians can lay claim to. Touring countless countries, packing sold out shows, and sustaining a loyal fan base is due to the band’s hard work and pure talent.
Now, after their Australian tour, the band will take a well earned break until they start working on their next studio album.
For Gus G, it’s his time to work on a solo album, his first. A long time coming, the album will feature guest artists, some instrumentals and have more of a classic rock feel.
As for Australian fans, they will have to pray and hope the band makes the trip more often.
Firewind will be touring four major cities and will be bringing their new singer with them, Kelly Sundown Carpenter.
Firewind play in Sydney on Thursday October 31 at the Manning Bar, Friday November 1 in Brisbane at HiFi, Saturday November 2 in Adelaide at Fowlers Live and Sunday November 3 in Melbourne at the Corner Hotel.Tickets are $59 plus booking fee and can be purchased from metropolistouring.com