Heracles as a visceral study of idolisation 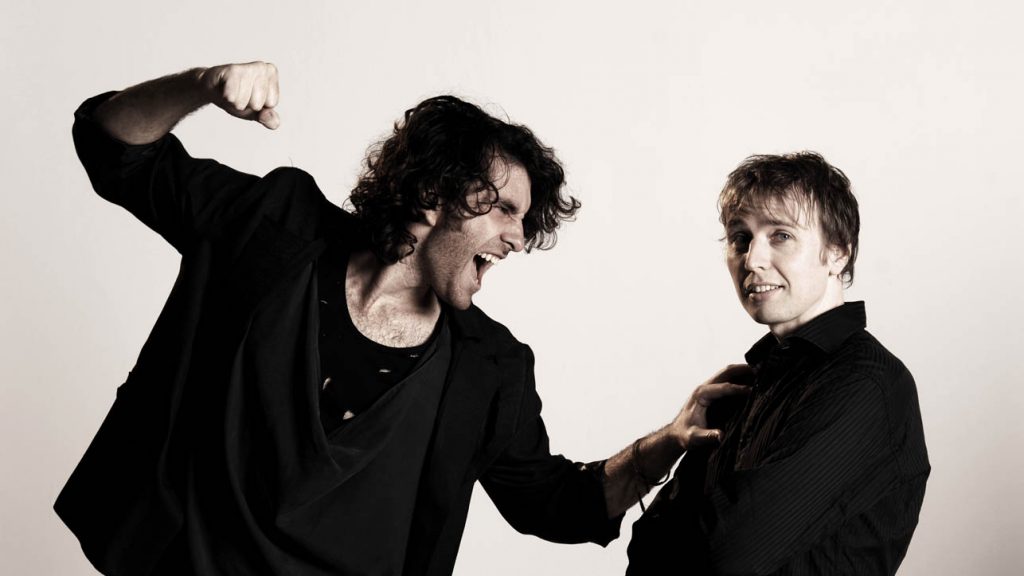 Xan Colman, director of Heracles High 5, is an eloquent chap. That rare type who can deliver the Artspeak without a lull or a moment’s break. Not bad for someone whose show is opening in four hours at the Arts House (aka Meat Market) in North Melbourne.

His eyes and the slightly jittering stoop speak volumes of course. Because you know, in reality, there’s a small movie in his brain running on a fast loop of a crash test car being hurled against a large brick wall. That’s perfectly normal, to be expected; this a brand new show, as yet to be tried and tested in front of a live audience.

The theory goes, that at some point hopefully, when the curtain rises four hours from now, his ‘crash test car of a brain child’ will break through that unforgiving wall and all glory and meaning will burst onto the stage.

A is for Atlas is a relatively young theatre company which began in 2006 by Colman and Grant Cooper, the producer of Heracles High 5, and a group of six, managers, writers, performers and so on.

Coleman is clear on the principles that drive the company, “Our intention is to create work that has a ‘cross art platform’ as its framework, merging a variety of artistic disciplines to create a show. For example if I, with a theatre background, were to ask a sculptor or a visual media artist to collaborate with us, we would learn something new about what they can offer and vice-versa.”

There’s also a belief, from their manifesto, that live performance must be the subject of continual experimentation in order to remain relevant and alive.
“We strive to create new performance works that invigorate the form, and invigorate audiences to seek out new foods for their creative consumption.”

Heracles High 5 has been described as “Post punk cabaret, disruption incorporating, the east German playwright and director, Heiner Muller’s script Heracles 5. I asked him what appealed to him about Mueller’s work. “I find his text to be very dense and richly layered with philosophical polemic. His writing is also highly poetic, particularly his language. I also find him very open to the making of theatre. Here is my text, he is saying, please take it.”

Sounds like an experimental theatre director’s dream. Opposed to working with traditional playwright who writes the perfect play and the director is merely there to facilitate it. What does it mean though, I asked, when you say you are merging punk and cabaret with a text.

“We are going with the line of post punk cabaret disruption” and then with a somewhat self mocking laugh, “and I think we are still discovering what that actually means.”

So what of the cabaret element? “With cabaret, there is participatory component. What is asked of that relationship between the audience and the performer.”
So, the forth wall is constantly shifting? “Well, it’s hardly there at all.” And the punk? “This is the musical aspect and is being used to create a visceral platform for argument and politics.”

Now, to the core idea. What are you trying to say about the myth of Heracles?

“He is the archetypal hero. This show is asking what it means to be a hero of our time. In a country that is fairly apathetic by how it is run, who then are our real heroes. In the news there was an incident of a drunken teenager pissing against a police station. What does it mean for him or someone else to be a hero?”
Are you then satirising that idea or the mainstream media’s idea of a hero.

“Well, yes and no. Heracles was not a self-determined hero. He becomes one because he was forced into doing the 12 labours. The question I am asking is what level of engagement are we, the general public, taking in the idolisation process, the holding up high. Are we just ‘signing on’? If we are, then we may have a problem.”

A multi media spectacle and a theatrical diorama inverting in on each other, and its only 3 and half hours to go until its final lift off.