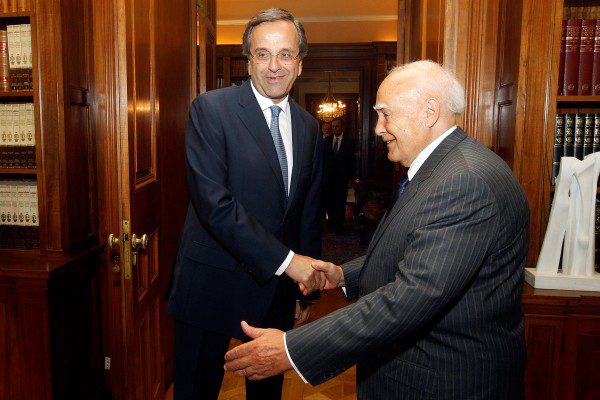 Greek Prime Minister Antonis Samaras (L) is welcome by Greek President Karolos Papoulias (R) during their meeting in the Presidential Mansion, in Athens on 27 August 2013. Samaras briefed the President on political developements in the greater region, Greece's role in them, and the Greek economy. AAP via EPA/ORESTIS PANAGIOTOU

As speculation builds about a likely US strike against Syria in the coming days, Prime Minister Antonis Samaras met with President Karolos Papoulias for talks that reportedly focused on Greece’s possible role in a US-led military intervention in Syria with the prime minister seeking to stress the country’s potential function as an anchor of stability in a volatile region
“One year ago, the region around Greece emitted a sense of stability while Greece was the source of instability,” Samaras said. “Now that situation has made a 180-degree turnaround. Greece is a bastion of stability and security in a region that is literally ablaze,” said the premier, who discussed the prospects for Greece as an anchor for regional stability during talks with US President Barack Obama in Washington earlier this month. “These issues were extensively analysed with President Obama,” Samaras said, adding that “this sense of stability also needs to be enhanced within this country.”
The prime minister’s briefing of the president followed reports that Washington has asked Athens to provide permission for US military ships and aircraft to pass through Greek territory and use the Souda Bay and Kalamata military bases for an intervention in Syria.
The Defense Ministry rebuffed those reports earlier on in the week but the government sources that had briefed the Greek daily Kathimerini insisted that the prospect for Greek involvement in a US intervention has been discussed in view of Greece’s experience in providing support for NATO’s intervention in Libya in 2011.
Greece is monitoring the situation in Syria “with concern and composure” and is “trying to play its role as a factor for stability, peace and security”, Foreign Minister Evangelos Venizelos said on Thursday, following a meeting he held with his cabinet colleague, Defence Minister Dimitris Avramopoulos.
Avoiding any explicit reference to the question of military intervention in Syria and what Greece’s position on that would be, the two ministers underlined that Greece would meet its international responsibilities and obligations, in cooperation with its partners. But they also emphasised that Greece would have to recognise its historical links with the Middle East.
Reiterating his statements from previous days that “a heinous crime has been perpetrated in Syria” using banned chemical weapons, Venizelos said that the government was “participating in all the discussions taking place in the European Union and Nato” relating to Syria.
Sources: ekathimerini, enetenglish