From an atheist Marxist rock star who has shared the stage with the Beatles and the Rolling Stones to a Greek Orthodox priest saving lives in the depths of Africa, it’s no exaggeration to say Father Themi Adamopoulos has seen it all.

Which is probably why Hollywood is considering turning his life story into a box office hit. But for the time being, his autobiography is being published.

Father Themi’s autobiography is expected to be published next year, letting us into a story of discipline and dedication, a story of love and compassion for all.

When the Ebola virus struck Africa in 2014, Father Themi could easily have left his post and returned home.

Instead, he chose to remain in Sierra Leone, showing the people that he was not going to abandon them at their time of need. During this time he continued with food distribution, medical assistance, hygiene awareness, education, church services, but above all, the first thing he did was to give them courage.

Father Themi is back in Australia for the first time in three years, in an effort to raise awareness and urgently-needed funds for his mission in West Africa.

He took time out from his busy schedule to speak to Neos Kosmos about his work.

“It was an invisible, silent war – worse than the civil war. This time the enemy is called Ebola. You should’ve lived through the Ebola crisis, it is just another world,” Father Themi says, noting that he found it very difficult to return to Australia having gone through all those experiences in Africa.

“It’s hard coming back and trying to fit in, to think this is normal, well, it is not normal because you know what’s going on back in Africa, you know the pain, you know the suffering, you’ve seen children in the streets begging, you’ve seen kids that lost their mother and father because of Ebola, you understand that the kids slept in the house with the corpses of their parents, they would be staying there for three to four days and you thank God they did not get Ebola,” he explains.

In Africa, death is something that you live with every day, it is not hidden. His sister Mary Adamopoulos, an educator and a very strong supporter of Father Themi’s cause, also spends most of her time in Sierra Leone.

She says her brother takes care of children of all ages and claims the number of deaths within one family can be extraordinary.

Aren’t they traumatised by it, I wonder …

“It’s survival, you just have to get on,” Mary muses.

For Father Themi, however, there is a price people pay for being exposed to such hardship. People with disabilities, particularly those who cannot walk, are considered cursed and are removed from the family because parents fear the curse may be passed on to the other children.

“They become angry and aggressive,” he adds.

“We shelter them, we take care of them, but if you say something wrong they get agitated because since they were little kids they have been rejected, they are considered to be cursed.

“So they become beggars from a very young age or they die in the streets.”

How can someone change this mentality?

“Through education,” Mary says, but Father Themi is a bit more sceptical as he has found many educated people who still believe in superstitions.
Brother and sister both agree that education and the teachings of Christianity are the best way forward.

“We have our primary school, we are now starting a kindergarten and a secondary school, we have got a youth group and all these kids are learning the Orthodox way because we care for them. They do not have to be Orthodox, we care for all of them,” says Mary.

Father Themi is quick to point out that all this work requires support from people here in Australia, both moral and financial.

“Our main concern is to take care of the Ebola orphans. We are building two orphanages, one for 3-9 years old and another one for 9-16 year old kids until they go to university. We cater for all kids, even those who don’t come to school. We feed more than 500 kids daily. We are the only school in West Africa that provides a hot meal to kids at a school setting because we have three compounds, one for the disabled people of the civil war, one school with 400 students, churches, a clinic, and now we are building an orphanage. We have also built a big dining room,” he explains. 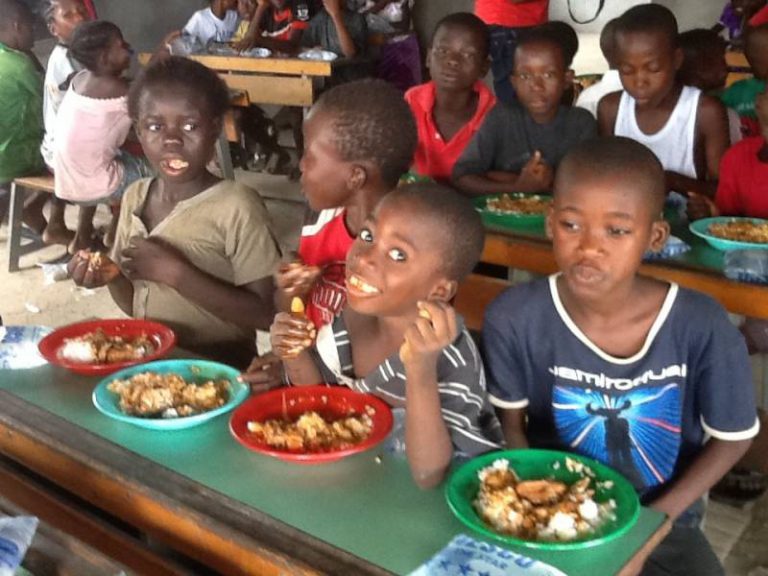 In order to continue his work on Sierra Leone, Father Themi relies on the support of many others here in Australia. Amongst them is Jane Pallot, the head of the Melbourne committee of Paradise 4 Kids, a voluntarily organisation which was formed ten years ago when Father Themi went to Sierra Leone.

The Melbourne committee is made up of volunteers who ensure that 100 per cent of all funds raised are allocated to the mission.

“Father Themi’s missionary work speaks for itself, he is a tireless worker,” Jane continues.

She feels blessed she had the opportunity to go to Africa and to see firsthand the way the mission has progressed; what was achieved in such a short time.

“That is why I’ve joined the fundraising for the mission, because it’s making a difference. When you go there and you see the children you realise that,” she says.

“You realise that these children are the future of Africa, and by providing them with security and hope, they can dream about their future,” Jane said.

She says the children can see something happening for them and this is why this mission is so important, how it actually protects the children and gives them an opportunity to dream.

Jane stresses that the disabled children have never experienced the nurturing of parents. They have instead had to grow up on their own, without the help and advice of older people in order to understand the world around them, leaving it to missionaries to provide them this much needed security.

“The mission teaches them about love and trust,” Jane adds.

“The funds we raise here in Australia help provide the mission with much-needed staff members, it’s really providing the heart of this important operation.”

She says Australians are so far removed from the problems of Africa that it is easy for people to turn their back on this part of the world.

“He needs our help to keep the mission and to make a difference to these kids, not to abandon them. I’ve seen their faces and now for me to turn my back is very hard,” Jane admitted.

“He gives so much, he is a tireless worker. Quite extraordinary, different. He supports people that society has forgotten. He is very careful the way the money is spent, everything is accounted for. He is very transparent.”

Jane also calls on the many Greek businesses in Australia to support the only Greek Orthodox philanthropic mission in West Africa.

“We attract the people that truly need, when you come into our church you see disabled people, beggars, people with no shoes.

“We really need to get behind the work that Father Themi is doing,” she insists.

“He is willing to be there, the least we can do is to support his work and make a difference to a child’s life, providing them with safety and education and as well as the opportunity of a brighter future. It’s only a drop in the ocean, as they say, but we only have to make a difference to one life and that’s worthwhile.”

While in Australia Father Themi will be attending fundraising events in Melbourne as well as in Brisbane and Sydney, where people will be able to hear directly from him about his work against the Ebola virus and his work with the poor.

“In the Pentecostal churches they sing and dance and that might attract people. Orthodoxy is more serious but people still come to us because they know that we care, it’s the philanthropy and love that is our mission,” Father Themis says.

“We don’t judge but we offer love and the opportunity to rise up. We never ask for anything back.” On this Sunday 20 September is the Annual Tea Party at Functions on Chapel, 255A Chapel Street, Prahran and on Sunday 4 October, 6.00 pm, a small, close up and personal dinner with Father Themi will be held at Cafe Platia 885 Burke Road, Camberwell.

Anyone can donate through Easy Donate for as little as $20 a month, which makes a huge difference. To become a regular sponsor, visit www.paradise4kids.org/paypal-donations