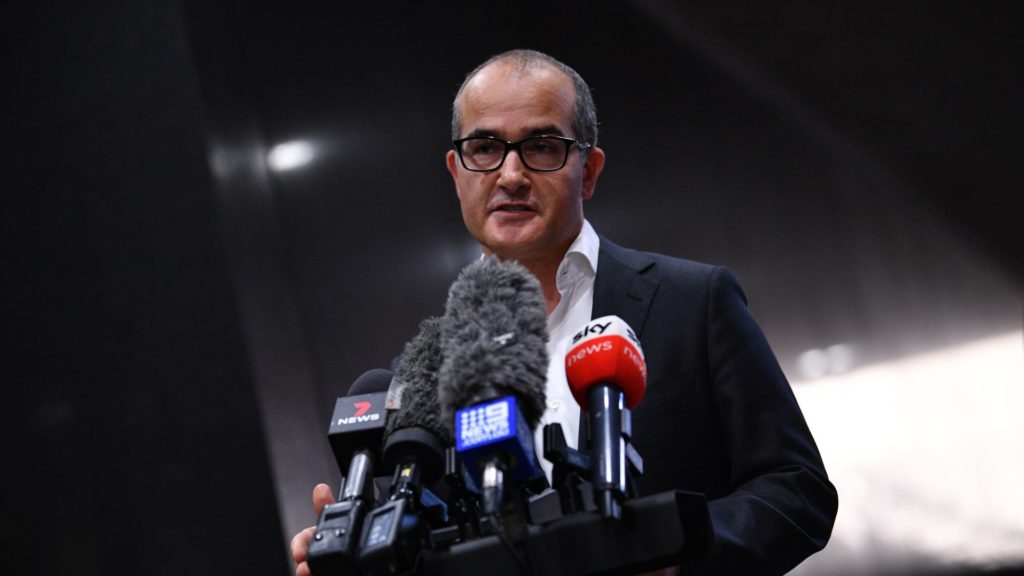 He said there were now more than 350 exposure sites and “a variant of the virus that is quicker and more contagious than we have ever seen before.”

New rules come into effect on Thursday, 3 June at 11:59pm, and will stay in place for at least a week.

It will be mandatory for all Victorians across the state to check into shops, including supermarkets, using the Service Victoria QR code check-in.

There will be five reasons to leave home for those in Greater Melbourne though restrictions have been eased a little:

Mr  Merlino said “the best way to stop this virus is via vaccination, but as we know, only 2 per cent of our population is fully vaccinated. If we let this thing run its course, it will explode. He said that if the virus is not run to the ground “people will die”.

“And if that happens, it’s our most vulnerable – it’s our parents, it’s our grandparents, it’s Victorians with underlying conditions or compromised immunity, it is those Victorian whose will pay the price,” he said.

To help businesses, the Victorian government is adding a further $209 million on top of its $250 million business assistance packages.

“If you are restricted to one week, then it is a $2,500 grant. If you are restricted to the two weeks of this lockdown period, then you are eligible for $5,000. So there will be a single application. $28 million to increase the licensed hospitality venue fund and those grants increase from $3,500 to $7,000. Again, if you have been impacted for two weeks, then you are eligible for the $7,000,” Mr Merlino said, adding that the state government has renewed its request to the Commonwealth to activate a “JobKeeper-style support” for Victorian businesses impacted by restrictions and that he would be speaking to Prime Minister Scott Morrison later on Wednesday to discuss this.

READ MORE: Victoria&#8217;s lockdown to be extended amid fears of transmission through &#8220;fleeting contact&#8221;

“If they do not (offer this support), I will be raising this directly at National Cabinet on Friday,” he said.

“A lot of Victorians, a lot of Victorian businesses are doing it tough right now and it is our clear expectation that the Federal Government will provide them the support that they deserve.”

Victoria’s Chief Health Officer Brett Sutton said that the restrictions will be reviewed on a “day by day” basis.

Victoria’s Health Minister Martin Foley said there were “new, unexpected detections in Bendigo, particularly between 27 and 28 May, and we’ve had one unexpected detection down on the Mornington Peninsula, in that section of the peninsula between can Safety Beach, down to St Andrew’s Beach and across to Portsea. That was recorded between 27 and 31 May. There are listed exposure sites in both of these regions and we are working through those possibilities with our public health team, but the advice to members of the community in those particular areas is if you have any symptoms and if you particularly live in these areas, please get tested now.”