The cover of the first book of Dryland.

“Dear Uncle Kostas, I hope this letter finds you well and in good health. I received yours a week ago and the news of your wife’s pregnancy filled me with joy; I wish I were with you in America to join you for a celebratory ouzo. Everyone in the neighbourhood has already heard the news and told me to congratulate you and your wife. As I mentioned in the previous letter, my engagement to Voula was due in November and everything seemed to be going perfect; alas, as I shall explain, the horrible events that followed will probably send shivers down your spine…”

“Both my parents’ families were orphaned, as the patriarchs were murdered in cold blood by soldiers acting in the name of political ideology.”

Thus begins one of the most ambitious graphic novels of the past few years, Dryland. Written and illustrated by Melbourne-born artist Con Chrisoulis, it is a narration in comic form of a part of his family’s history: the violent deaths of his ancestors in the area of Xiromero (hence the title Dryland) in the western part Acarnania, in a story spanning from 1895 through to the Civil War (1944-1949). 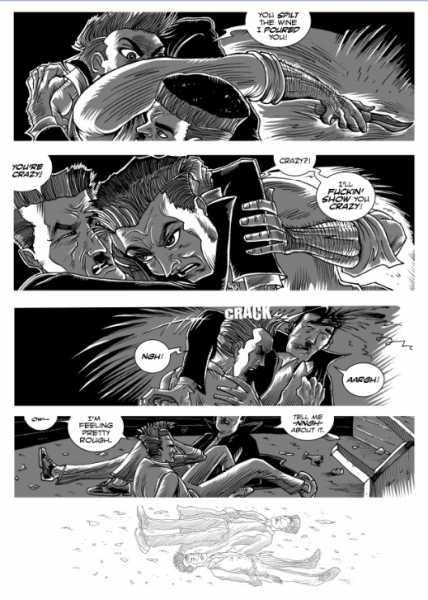 It is not the first time that the artist has looked for inspiration in such personal areas. Ever since his first attempts at comics, he has specialised in a sub-genre of autobiographical comics, narrating episodes that happened to him. But this is something different; the idea came to him after having long discussions with his parents.

“I had a vague idea of what happened to my ancestors, having heard stories from my parents,” he says. “But I only started asking questions about the events after a surprise reunion with long-lost relatives from the United States, whom we hadn’t heard of for more than 60 years.”

The story will unfold in a series of books. The first 24 pages were submitted to a contest held by the ‘First Fictions’ boutique literary festival in the UK.

Being shortlisted, Con decided to publish the first part himself, selling it at comic conventions and exhibitions, which led to him landing a publication deal with Marcosia Enterprises, which will print the first book by the middle of 2016. 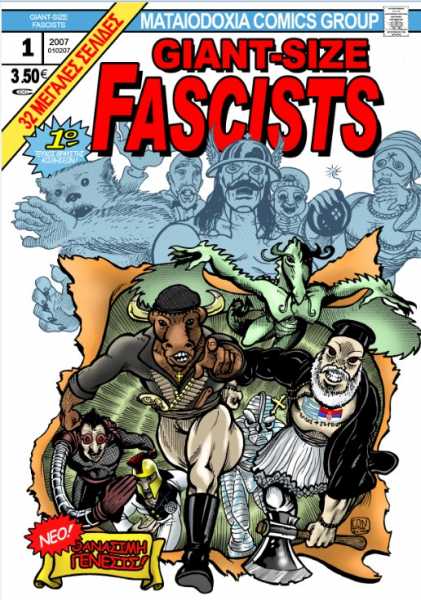 In the meantime, the story unfolds online, in segments posted twice a week, on the Greek website SoComic.gr (created by the Greek ION chocolate company, to support the vibrant comic scene in Greece).

HOW POLITICS DESTROYED GREECE
“Talking to my father about these incidents, I realised that I was the only one who could write these stories and, if I didn’t, any mention of their lives and tragic deaths would be lost forever,” Con says of his decision to tell the story.

“The first book tells the story of my grandparents on my father’s side. It ends with the death of my great-grandmother, who froze to death on top of Mount Perganti in Xiromero (the western part of Acarnania) while she was trying to smuggle tobacco from one village to another.”

The imposition of a monopoly on tobacco trade by the dictator Ioannis Metaxas came as a severe blow to the livelihood of many families in the region, who were affected and had to resort to illegal trading. In essence, the end of the book sets the stage for the next books, which will be about the violent deaths that both Con’s great-grandfathers met.

“My grandfather on my mother’s side was murdered in the village of Kandila, in front of his children, by Nazis and their collaborators”, he goes on. “My great-grandfather on my father’s side was tortured to death by communist partisans, during the Civil War. Both families, large and already very poor, remained headless and orphaned, as the patriarchs were murdered in cold blood by soldiers acting in the name of political ideology”.

It is not the first time that Con has dealt with the disastrous effect of political dogmatism in the Greek mentality. 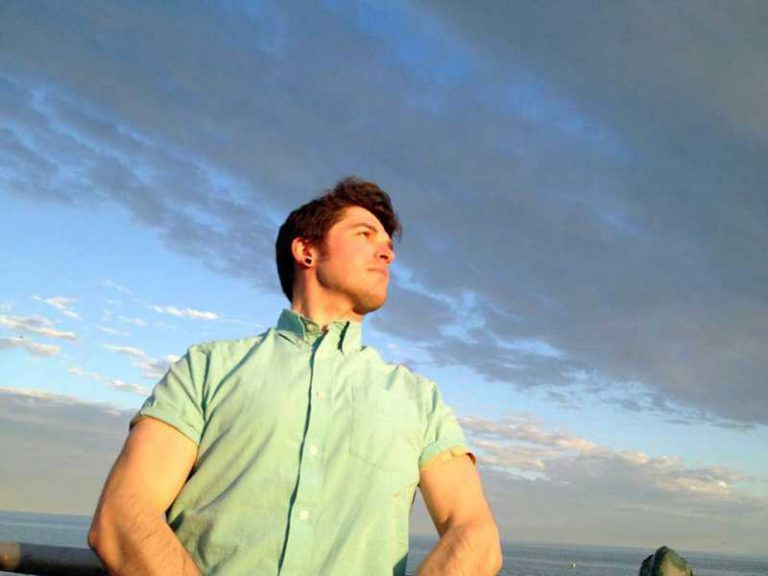 He came to fame among the Greek comic scene with his satirical series Giant-Size Fascists, which follows the adventures of a group of Greek ultra-nationalist superheroes, battling against an army of enemies of the Greek ideals, most notably a band of communist supervillains. The series was published in the left-leaning political and satirical magazine Galera and managed to infuriate readers at both the right and left ends of the political spectrum. After researching the inter-war era for Dryland, the artist confirms that political dogmatism is a “form of stupidity” that has infected Greeks.

“Giant-Size Fascists dealt with the modern-day ideology conflict, which is characterised by a kind of irrationality and schizophrenia and is also a mirror of what happened in the past,” he says. “One of the consequences was my parents’ migration to Australia, where they met, got married and gave birth to me.”

A MIGRANT BOY TELLS THE STORY OF A BAND OF MIGRANTS

Born in rural Victoria, Con grew up in Melbourne, where he lived until he was 20 years old, when he decided to relocate to Greece.

“We have been going back and forth since the ’80s,” he recalls. “My favourite Melbourne memories involve school, friends, parties and my first attempts to publish my comic Clans in 1996. I loved the Yarra River, but I hated the continuous construction of towers in the city, which was getting out of hand.”
His parents and brother have returned to Melbourne, due to the crisis in Greece, but he’s reluctant to do so.

“I’d come back to visit them, but I wouldn’t stay long. Something keeps me on the old continent.”

After ten years of living in the centre of Athens, making comics and playing with a band, Autodivine, Con got fed up with having to change between various uninspiring day jobs in order to survive and deal with the attitude of a large number of the people. So he relocated to the UK in 2011, where he completed a BA and a masters degree. 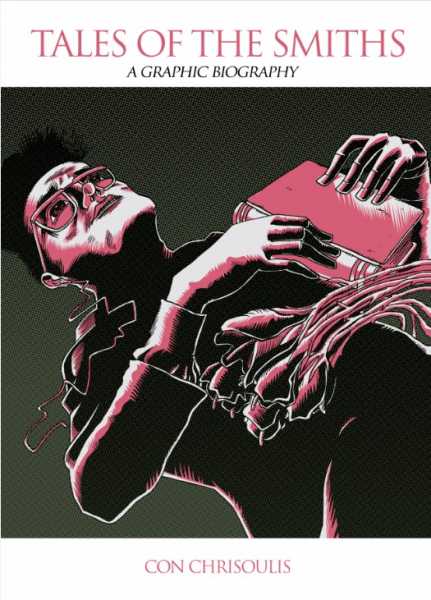 He lives in Brighton (“I like to be in proximity to the sea”), works at the Design Museum of London, plays with a ‘concept art’ band called Ghosts of Future Past and continues working on his graphic novels.

In fact, another one of his works has already gained acclaim as “one of the most exciting new releases of 2016”. It is his Tales of The Smiths graphic novel, which was published online at the SoComic.gr website, running daily for three years. It is a graphic biography that tells the story of Morrissey, Johnny Marr and the other members of The Smiths before they formed the band, one of the most beloved and influential in pop history.

“The project started as a desperate attempt on my part to find out information about them, how they grew up and formed their personalities,” he remembers.

“After finding scarce details in relevant biographies, I managed to source a lot of tidbits and information in rare interviews, old correspondence, press clippings and so on.”

The result is a fascinating and impressively detailed account of the band’s members’ lives, from 1959 to the formation of The Smiths in 1982.

Shortly after the end of the series’ run on SoComic.gr, Con signed a contract for its publication in a volume comprising 450 pages, with Omnibus Press, one of the leading publishers of musical biographies. Not bad for a struggling artist who feels connected to The Smiths in terms of social background.

“They were born in England to parents who were working-class migrants and tried hard to make it,” Con says. “I can relate to that: I’ve been a migrant throughout my life; I am the child of economic migrants to Australia, a Greek Australian migrant in Greece and now an economic migrant to the UK.”

At least now, he gets the chance to tell his family’s story to an international readership, teaching them about the dark pages of Greece’s recent history.

“People who read Dryland are very interested in the Greek inter-war period, because they have no idea what was happening there at the time,” he says.

“A lot of them say that Greece’s recent history reminds them of mid-eastern countries, where one dictator is succeeded by another and the people slaughter one another for the sake of the leading elite. They’re not that mistaken, come to think about it.”