Emmanuel Santos and Carol Gordon present Jews of Greece exhibition, in an effort to educate younger generations and bring the fascinating stories of the Greek Jewish Holocaust survivors to light

Passover, or Pesach in Hebrew, is one of the three major pilgrimage festivals of ancient Israel. With it being celebrated last Monday, the Jews of Greece exhibition launched on 2 April couldn’t have come at a better time.

Hosted by Melbourne’s Jewish Museum, Jews of Greece was put together by acclaimed photographer Emmanuel Santos and filmmaker Carol Gordon with an aim to provide visual documentation of the history, heritage and modern day pretense of the existing Greek Jewish communities.

This exhibition offers rare insight into the history of the Romaniotes, the Jews who originated from Greece, with a community dating back to 300-250 BC or earlier. Even though Greece had one of the oldest and most significant Jewish communities outside Israel, its story is not widely known.

Greece’s Jews were completely assimilated with the rest of the Hellenic population since ancient times, receiving an even larger boost during the Spanish Inquisition, in the 15th century. The Greek Jewish communities were vibrant and flourished until they were almost decimated during the German invasion. 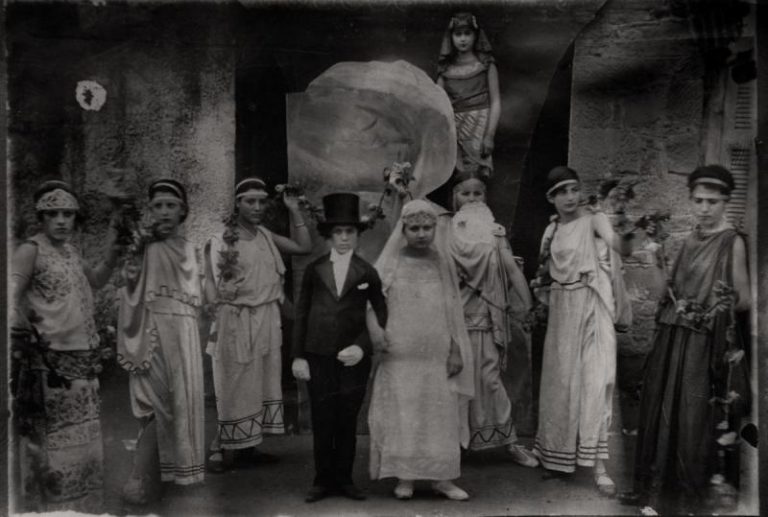 Santos’ evocative photographs alongside Gordon’s videos from the documentary, present events of great historical value leading up to the Holocaust. The remaining Jews of Greece share their stories of survival and testimonies of efforts to rebuild those communities, aspiring to educate younger generations.
For Carol Gordon, this body of work encapsulates over 30 years of research into the untold stories of Greek Holocaust survivors, whereas for Emmanuel Santos, portraying the Greek Jewish community’s legacy is a continuation of his in depth exploration of the Jewish community worldwide.

“I have always felt spiritually connected to Greece, in a way I can’t explain. I love Greece and in all my travels there, I kept discovering remnants of Jewish populations that had disappeared during the war,” Gordon explains.

The South African filmmaker and documentarist decided to bring these stories to light and went on a quest of uncovering more data regarding small Greek island and mainland communities. Relocating to Australia her connections with the Greek migrant community broadened and so did her burning desire to tell those Holocaust survivors’ story.

“From my point of view, the most alluring and attractive thing about this subject is how intertwined the Jewish history is with Greece. For thousands of years these people held on to their faith but they were Greeks!” Santos tells Neos Kosmos.

“The recorded dateline of this community that emanated from 300 BC, bears the whispers of ancient Greece itself in a way. In my almost 30 years of photographing the Hebrew diaspora, I had never really looked at the Greek Jewish diaspora, as much as I knew it was of significant size and historical importance.
“For me it is an expansion and an integral part of the body of work that I have been doing.” Both creatives were fascinated by the tremendous effect suspicion, economic hardship and civil war had on Greek Jews even after the German occupation. This is what Santos tried to capture in his portraits.

“The portraits were of the survivors. My intent was to depict the whole fate of being a Jew in Greece. Of course we had to portray the darkness of the Holocaust but at the same time, the pride of being a Jew.
“Surviving still has that disdain and sorrow of having lost their families, so I’ve captured it in a more melancholic way, with a touch of nostalgia. In some cases I’ve used film and in some digital, but I’ve treated all the photographs like film,” he explains.

“Those individuals are the vessel of the tragedy of being exiled from their own country, cultural tradition, spiritual and ancestral tradition. They are the vessel that holds the remnants of those small communities; traces of the past. Hopefully they will continue to exist.” 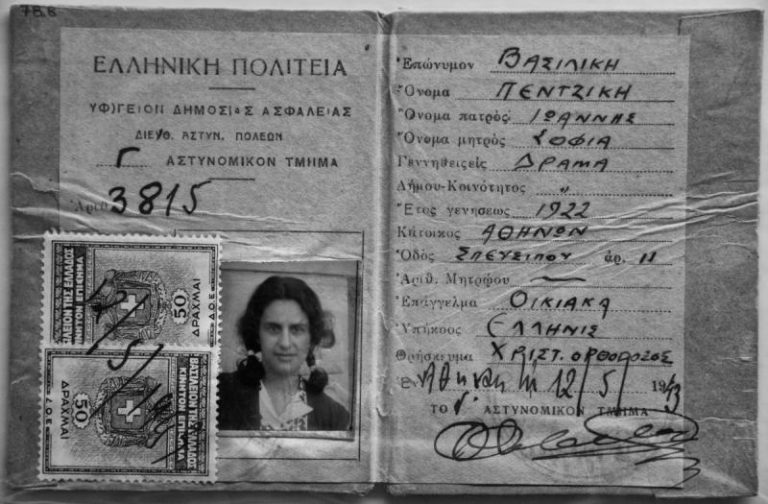 From the moment Gordon came up with the idea of publishing her screenplay as a book, the thought of having it illustrated with photographs felt the most fitting.

“Mani was the first person I thought of,” she says. “Not only does he have a history of documenting the Jewish diaspora but also the Greek diaspora, so it was a great, a perfect fit. Meanwhile, I had also decided to take all this information and do a documentary. The photos were taken during the documentary filming; you’ll hear the camera shutter in many of the interviews in the documentary.”

Arriving to Greece, they were faced with a brutal and unexpected reality. Hours before they landed, members of Golden Dawn had assassinated rapper and poet Pavlos Fyssas.

“We were hours away from Greece, in Dubai and Fyssas’ assassination was all over the news, Santos remembers. We arrived amidst strikes and protests … graffiti everywhere … the crisis. It was like a curtain was lifted and we were thrown into this world of racial indifference. History was, is, repeating itself.”

Gordon couldn’t help but wonder how the people in the photographs must have been feeling seeing Golden Dawn supporters, aka Neo Nazis, on the rise.

“It was a scary emotional phase for the survivors, who still have memories of Nazi Germany,” she says. “They were describing the same mood, going round before Hitler and his supporters gained ground. Things were escalating slowly back then. That’s what they talked about and some of the portraits capture these passionate moments.”

The turmoil Greece was going through at the time led Gordon to develop an even bigger interest, “a passion, a fire, more air to the flame that was already burning”. 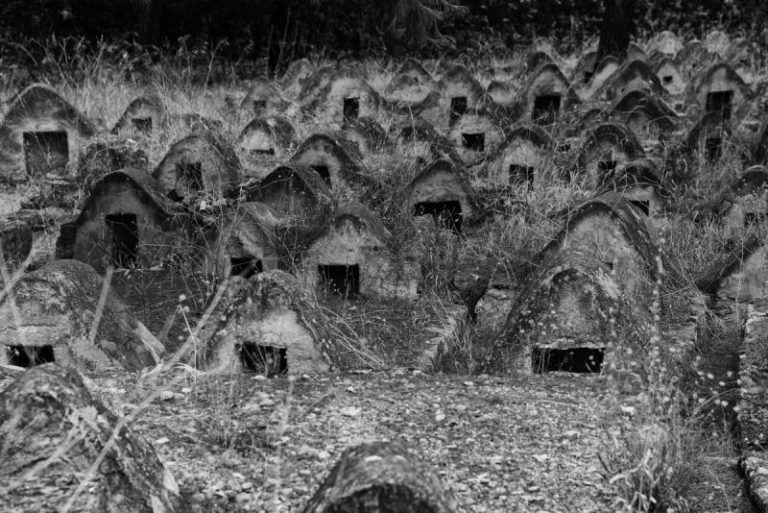 Walking around cemeteries and strolling the streets of Thessaloniki seeing heirlooms of a once evolutionary community used for paving or steps made her want to uncover every single bit of history.

“During the 15th and 16th century Thessaloniki was one of the largest Jewish communities in the world. And suddenly there was nothing. Even before that the Jews had branched out in so many places, central Greece the Ionian sea, islands in the Aegean. These people had been integrated and had adapted to the whole Greek mentality. They had survived the Romans, the Turks, but the Germans were very specific and effective. At the moment this community is an echo of the past and that is what I tried to show but also our body of work has an educational purpose; it is a call to preserve.”

Indeed, Jews of Greece is a beautifully conceived and executed project with a unique “sensory architecture”. The way the exhibits are placed in the Jewish Museum’s corridors aims to evoke memories and emotions, not only of sorrow but of hope. As much as the history itself is dark, the way Santos curated the layout is designed to create light.

“The Holocaust section of course had to be there, and it is respectfully portrayed but it’s not just that.
“I have used white and have recruited all the senses in order to impose a pleasant, calm atmosphere. I want people to feel like they are in an Orthodox church.
“My son designed a scent that would help recreate the smell of the old synagogue, with a touch of bergamond and added Greek Sephardic music, Ladino songs. It caters to a lot of senses,” he enthuses. What’s next for Jews of Greece?
During the five months the exhibition will be running at the Jewish Museum, the filmmaker will be looking into requests of interest she has received from Greek and Jewish communities in the UK, Canada and the US that are keen to host it.

“We hope that we’ll be able to take this exhibition all over the world. Jews of Greece has already had three beautiful events a while ago with the Greek Jewish Community in South Africa. It is important to note that the Greek Jewish community in Greece was one of the oldest and most thriving, yet people still keep quiet about it,” she stresses.

Regrettably, the whole history of the Greek Jewish community is not on the radar of the Jewish narrative; it is something like a footnote rather than a chapter, however, more and more Greek communities around the world wish to include this rather significant part to their history.

“There is still footage that didn’t make it into the film and we feel it is our duty to profile all the communities that we visited and honour some of the survivors who offered their testimonials. Some of them are no longer with us,” Gordon continues.

“We want to reach an educational target and hope that at some point an institution will jump in and help us continue this project. Until now I have been doing it all by myself. Emmanuel and the documentary crew came on board on a pro bono basis.”

Meanwhile, with the 70th anniversary of Israel’s independence approaching, Santos will be incorporating the Jews of Greece in an installation taking place at the Negev desert, depicting 70 different narratives from November 2017 until the end of November 2018.

“I have been documenting human culture from a very young age,” says the acclaimed ethnographer who started his photographic journey as an engineer from a small village in the Philippines.
“I was given a camera by my mentor, a famous photojournalist of the time and wanted to go and explore new things. Before I left, I decided to document my village. And with the camera I was able to photograph where I’m coming from, and through that, I was able to understand who I am, who I can become. I started singing the visual song of the universal human existence and the commonality of human experience. I delved into documenting human culture, many cultures apart from the Jewish and the Greek. These two traditions, however, share a reverence of rituals; they have so many similarities tracing back to ancient times.
“The rich history of Greece’s Jewish communities has given birth to such cultural beauty, which is a shame to remain hidden.”