Allied prisoners in the enclosure at the Nafplio school grounds, April 1941. PHOTO: Bundesarchiv

As the Allied campaign in the defence of the Greek campaign came to an end with the last evacuations from Nafplio and Tolos on 29 April 1941, thousands of Allied soldiers were captured by the advancing Germans. They would all be brought to Corinth and its Prisoner of War (POW) camp, for a few months Corinth would become one of the major POW centres in Greece, and notorious for its dreadful conditions. This is their story.

Last year I drove out over the hills and plains south of Corinth, I tried to imagine the lonely columns of tired Allied prisoners trudging north that would have been a common sight in late April and early May 1941.

The 2,000 Allied soldiers were captured at Nafplio and held initially in the fenced enclosure of the local school grounds near the harbour. They were soon joined by the 1,300 other Allied troops captured at Tolos on 29 April who were marched the few kilometres to Nafplio, arriving the next day. A German photograph survives, showing Allied soldiers milling around the yard.

One of those held there was Frankston’s Private Robert McLeod of the 2/6th Battalion’s B Company who only days before had defended the Corinth canal. Separated from his unit, Robert made his way south to Nafplio but failed to be evacuated. 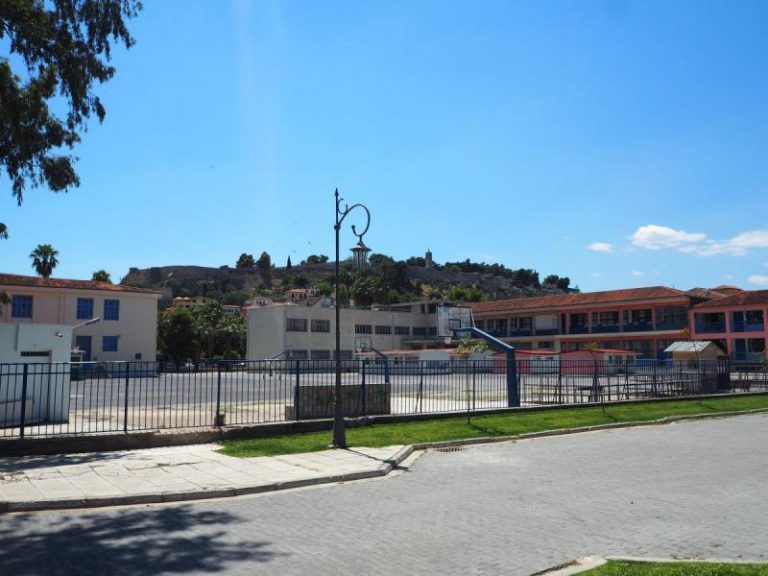 After a few days those held here were moved north, some transported in the closed carriages of a narrow-gauge railway went directly to Corinth. Others marched on foot, some stopping at Argos.

At Argos, 200 soldiers were crammed into a dark warehouse cellar near the town square, with no sanitation, windows, or fresh air. Held here for a day or two, the prisoners were once fed a meal of ‘synthetic margarine and sausage.’ The prisoners were called out early each morning to stand for hours in the yard outside.
Toorak’s Gunner Ian Ramsay of the 2/2 Field Regiment remembered the brutality of the guards, Ian himself being beaten by an officer for no reason. Any civilian – no matter age or gender – who made any effort to assist the prisoners, such as trying to throw them food, was violently dealt with.

That made the soldier all the more grateful to those who did help despite these dangers, like the young girl who he could never forget who quickly thrust a packet of cigarettes into his hand before safely disappearing along a lane – unseen by his German guards. As he later wrote:

“The girl had risked horrible and painful reprisals in showing her loyalty to the Allies and her sympathy for the prisoners. The Greek’s were fine allies, loyal, brave, and sympathetic.”

As they moved north they were given no food or water and little rest by their guards. Ian remembered the diggers in his column comparing the colour in the environment and dust of the road to Australia – except that there were no gum trees and flies – or ‘sheilas’ one added!
Marching through the night they passed through silent hamlets, beside olive groves – with only the sound of a barking dog or a goat’s bleat disrupting the silence.

By sunrise Ian and his comrades had reached Corinth and its POW camp. Here they would join the 900 Allied soldiers captured at the Corinth battle on 26 April.
Last year I stood before the walls of the former Corinth camp – some parts of the wall showing its age. It was an honour to be joined by descendents of some of the Jewish Palestinian soldiers and pioneers, who fought in Greece, were captured and held at Corinth.

Through late April and early May of 1941 Allied prisoners streamed into Corinth’s prison camp from across the Peloponnese. By 6 May the camp was overcrowded with 8,000 Allied prisoners, including nearly 900 Australians and 1,000 New Zealanders.

Another strange group of inmates were 4,000 Italian POWs captured by the Greek Army in Albania whom the Germans refused to release.

The barrack huts were described by inmates as ‘old verminous’ structures, filthy and primitive, alive with bedbugs, lice, spiders, and rats. The smell of animal and human faeces hit you as you entered. Australian prisoner John Crooks remembered the internal latrine awash with urine and faeces, up to the top of his army boots. As the Australian Ian Ramsay remembers ‘the filth was unspeakable.’

The verminous condition of the barracks led many prisoners to dig foxholes in the sandy soil, covering them with whatever scrap material they could find. One prisoner – Palestinian Sergeant Yosef Amogi – thought they looked like ‘rats’ as scuttled about their holes.
The open area was the location of a 70-metre long open trench latrine and as well as a couple of wells from which the prisoners could draw their water ration for both drinking and washing.
The rations provided by the Germans were meagre and described as ‘terrible.’ South Australian Ralph Churches remembers being given two servings of a tightly rationed diet of thin potato soup. The typical diet amounted to little more than 800 calories per day, leading prisoners to suffer constant hunger pains and weakened health. Australian Kevin Byrne remembers feeling hungrier and hungrier. Prisoners like Australian Alf Stone suffered blackouts due to the lack of food.

A lifeline for the prisoners was a visit from the International Red Cross but more importantly the regular supplements to their diet provided by the local Greek community. Some would throw food over the perimeter enclosure – despite the threat of violence by the guards. For a time the Germans even allowed the operation of a kind of food market, most likely just inside the camp perimeter, from which prisoners with drachmae could purchase dried fruit and other food items.

Yet due to the generally poor diet, the prevalence of lice, and the proximity to open latrines with their army of flies in summer, many prisoners rapidly become debilitated with malaria and dysentery.

With 20 per cent of the prisoners infested with lice, the Germans organised guarded trips to the nearby waters of the Gulf of Corinth. One digger remembers his embarrassment as he and the other prisoners were marched naked through Corinth in broad daylight – to the amusement of their guards.

The German camp authorities generally expressed little regard for the mass of humanity under their care. As in other camps in Greece, former prisoners remembered being assaulted and ‘a good deal of unnecessary shooting’ by the young SS troops and older unfit soldiers who replaced the frontline troops who were the initial guards at the camp.

Some prisoners would volunteer for labour gangs for extra food but often suffered the danger of defusing bombs and shells – in breach of the Geneva Convention.

After nearly two months, the camp finally began to close from the early hours of 5 June with the first prisoners beginning the long journey north – by rail and by foot, first to the ‘hell-camp’ at Thessaloniki and then on to permanent camps in Germany.

Some Allied soldiers would escape from the Corinth camp and a few as they journeyed north.

We know of at least three Palestinian soldiers who escaped and for a few weeks joined up with New Zealand Corporal Fred Woollams north of Megara. Others escaped during the marches north.
Readers of the Perth Sunday Times on Sunday 26 April 1942 would have been glad to read the welcome news of the escape from the Corinth prison camp of Corporal Lew Bailey from Narrabeen and Sergeant J Phillips from Sydney, along with two other British soldiers.

Corinth was also the location of a hastily organised medical facility for the prisoners, operated by captured Allied medical personnel and local women, located at two hotels in Corinth. This was opened due to the lobbying of a 70-year-old Greek Red Cross worker, Ariadne Massautti. It was to here that wounded Allied soldiers, like Private George Young of the Australian 2/6th Battalion from Parkdale in Melbourne. Seriously wounded on the retreat from Corinth, he was most likely transferred to another Allied prisoner medical facility outside Athens when the Corinth facilities closed on 10 May. Sadly he died and is buried at the Phaleron Cemetery in Athens.

After the war the site of the Corinth prison camp was returned to the Greek Army and fully renovated. For some time, it served as the base for the Greek Army’s 6th Infantry Battalion.

For the 8,000 or more Allied prisoners held at Corinth it would be a time they would find hard to forget. For Kevin Byrne, Ralph Churches, Ian Ramsay, and Bernard Ryan and the other nearly 900 Australians held here, Corinth would feature in their memoirs and recollections.

Sadly today there are no memorials at any of the former prison enclosures and camps I have mentioned. But the story of the camps, those held there and their Greek helpers deserves to be commemorated as it is at other similar locations across the world. These experiences of Australians and Greeks are part of the web of experiences connecting Australia and Greece. Let’s hope that new memorials will soon be erected in their honour.

Jim Claven is a freelance writer and historian with a Masters degree from Melbourne’s Monash University. He has researched the Anzac trail in Greece across both World Wars, and the Hellenic connection to Anzac through the role of Lemnos in the Gallipoli campaign. He has been Secretary of the Lemnos Gallipoli Commemorative Committee since its creation and is a member of the Battle of Crete and the Greek Campaign Commemorative Council. Jim thanks Jenny Krasopoulaki and the Pankorinthian Association of Melbourne and Victoria for encouraging his research. This is the final of four articles on the Anzacs at Corinth and the Argolid. Jim recommends Peter Monteath’s excellent history ‘POW: Australian POW’s in Hitler’s Reich’ for those seeking more information.

He can be contacted at jimclaven@yahoo.com.au