The rock on which the fossil footprints were found goes back 5.7 million years 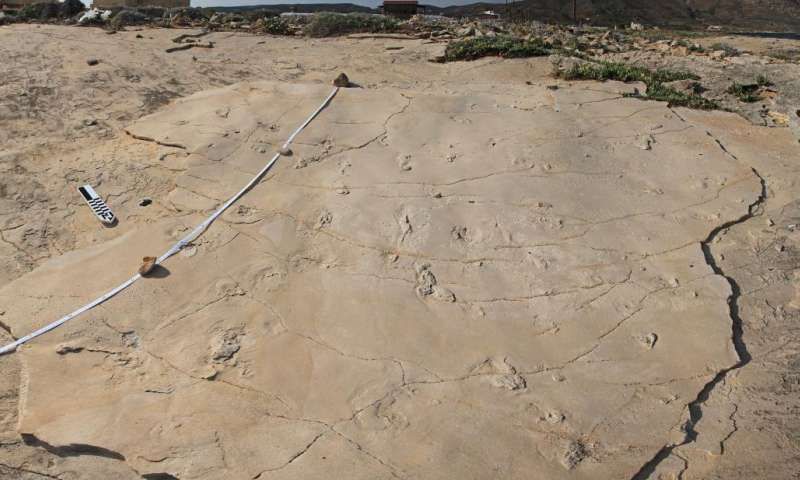 The footprints were discovered by Gerard Gierlinski (1st author of the study) by chance when he was on holiday on Crete in 2002. Gierlinski, a paleontologist at the Polish Geological Institute specialized in footprints, identified the footprints as mammal but did not interpret them further at the time. In 2010 he returned to the site together with Grzegorz Niedzwiedzki (2nd author), a Polish paleontologist now at Uppsala University, to study the footprints in detail. Together they came to the conclusion that the footprints were made by hominins. Photo: Andrzej Boczarowski

According to a study published on 31 August entitled Possible hominin footprints from the late Miocene (c. 5.7 Ma) of Crete? by the Geologists’ Association it is confirmed that the first upright standing human ancestors appeared in the Greek island of Crete.

Tests place the rock on which the fossilised footprints were found 5.7 million years back; a time that based on paleontology human ancestors were believed to have apelike feet and lived in Africa.

The findings close to the village of Trachilos, west of Kissamos (also known as Kastelli), in the Chania prefecture of Crete, however, prove these ancestors had prominent human features and an upright stance as indicated by the shape of the foot which is quite similar to that of the modern man.

“The interpretation of these footprints is potentially controversial. The print morphology suggests that the trackmaker was a basal member of the clade Hominini (human ancestral tree), but as Crete is some distance outside the known geographical range of pre-Pleistocene (2.5 million to 11,700 years ago) hominins we must also entertain the possibility that they represent a hitherto unknown late Miocene primate that convergently evolved human-like foot anatomy,” the researchers explain.