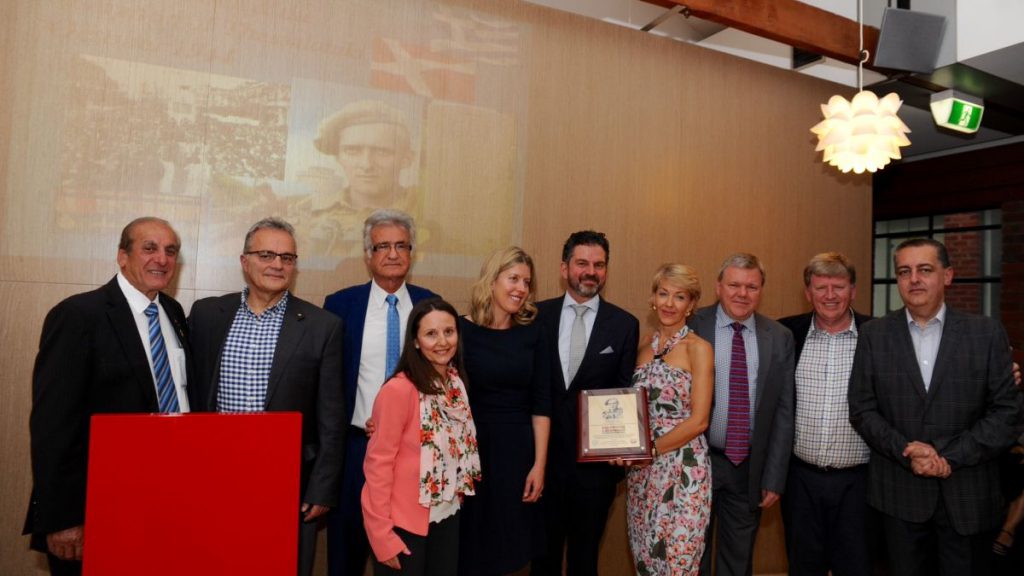 This week saw Melbourne’s Greek community join with local Danes to commemorate the key role played by Major Anders Lassen in the liberation of Thessaloniki 73 years ago last month, in October 1944. This is the first time since 1944 that Hellenes in Melbourne – and possibly the world – have joined with Danes to celebrate and commemorate Anders Lassen.

The event was held at Melbourne’s impressive Royal Danish Consulate General Denmark House, and was hosted by the Danish Honorary Consul-General in Melbourne, Jan Ravnholt who acted as master of ceremonies for the night. It was attended by over 100 people, including diplomatic, political, RSL and other community representatives. Also attending were Judith Gunnarson and Deb Stewart, both descendents of Sister Evelyn Hutt who served on Lemnos in 1915. Judith also spent a major part of her life in Scandinavia. The event blended Danish and Hellenic hospitality, with traditional Greek music from the Melbourniotes band welcoming attendees to the consulate.

The highlight of the event was the attendance of Mr Tom Nørring, Danish Ambassador Extraordinary and Plenipotentiary to Australia, and his wife Claudia, a native of Thessaloniki herself, who came to Melbourne especially for the event. Also in attendance was Maria Gidarakos, representing the Greek Consul-General in Melbourne.

The event was organised by myself, Melbourne’s Thessaloniki Association ‘The White Tower’, and the Battle of Crete and Greece Commemorative Council, along with Melbourne’s Danish Consulate, both as part of the annual Melbourne-Thessaloniki Sister-City celebrations and the annual program of events commemorating the Battle of Crete and Greece in the Second World War.

The story of Anders Lassen and his role in Greece and Thessaloniki is not so well known amongst Hellenes or Australians. This commemoration was held to increase awareness of this important part of Hellenic history.

Major Anders Lassen was 24 years old when he led the liberation of Thessaloniki in October 1944. Originally tasked to observe the German situation in the city, Anders decided to engage the German occupiers and force their surrender or expulsion before they completed their planned destruction of the city’s infrastructure. On 29 October Anders led his 40-man special forces team, including Lieutenant Mavrikis and members of the Greek Sacred Squadron, along with members of the local ELAS resistance, in an assault on the German occupation of the city. After much fighting, the remaining Germans abandoned the city the next morning. Thessaloniki was free.

Anders also took an active part in the Allied raiding parties which harassed the Axis occupation of many Aegean Islands throughout 1942 and 1943. He led successful raids on Crete, Symi, and Santorini to name a few. On Crete he was guided to his targets and hidden during his escape by the local resistance. His bravery under fire saw the Cretans name him Spiro.

His loyalty to his men was legend. But this also extended to those who bravely helped them. After the capture of Samos in 1943, Anders organised the evacuation of many local civilians to safety as the Germans returned to occupy the island. He left notes for the Germans,threatening them with retribution if they carried out reprisals against the local population. And he famously returned to Symi to avenge the murder by the Italian garrison of a local priest and his son who had helped the Allies.

Noted for his bravery, Anders was a striking figure. Tall, blond and blue-eyed, he always impressed his fellow soldiers with his fitness and leadership skills. He appears to have had a magnetic personality, one of his commanders wrote that he was “irresistible” and “exuding Viking charm.” When in charge of any operation he always led by example. Since the occupation of Denmark by the Germans in 1940, Anders had been eager to engage the enemy personally. He often seemed to act without fear, some considered that he was chasing death. One comrade said that serving with Anders was like serving with Achilles!
Prior to his service in Greece, Anders took part in raids on West Africa and the Channel Islands. After Greece he served in northern Italy, where he was killed leading his men against a German position, the defenders shot Anders after they’d sought surrender. He was 24 years old.

His personal qualities saw him promoted in the field from private to major in just five years. He was awarded three Military Crosses as well as numerous other medals – including the Victoria Cross, the highest award for gallantry awaarded in the Commonwealth. Sadly this was earned posthumously.
Anders has the distinction of being the only Special Air Service soldier and the only non-Commonwealth soldier to have been awarded the Victoria Cross in WWII.

At the commemoration Ross Alatsas, deputy chair of the Victorian Multicultural Commission, spoke of Anders as defender of all we hold dear: a society that welcomes diversity, and of his own personal connection to Anders through their common Greek name Spiros. Bill Papastergiadis, Greek Community of Melbourne and Victoria president welcomed this collaboration between the two communities. Iakovos Garivaldis’, OAM, vice-president of the Thessaloniki Association ‘The White Tower’ address met with a warm response as it was in the form of a direct thank you addressed to Anders himself.

The highlight of the event was the presentation to the Danish Consulate of a memorial plaque dedicated to Anders Lassen and the liberation of Thessaloniki by Paul Mavroudis, OAM ‘The White Tower’ president and Tony Tsourdoulakis, secretary of the Battle of Crete and Greece Commemorative Council.

Mr Tsourdalakis said that it was an honour for the council to be able to take part in this important event, and said that Anders Lassen played an important role in the fight to liberate Greece from Axis occupation.

Mr Mavroudis acknowledged that this was an important day for the Thessaloniki Association and all Hellenes in Melbourne. He added that there was no better way to celebrate Melbourne’s sister city relationship with Thessaloniki than by coming together at the Danish Consulate in Melbourne to honour Anders and the liberation of Thessaloniki.

In accepting the memorial plaque, Mr Nørring said that he was a personal friend of Thomas Harder, the author of a major Danish biography of Anders. He echoed the words of Mr Alatsas that the world that Anders’ gave his life for was one of tolerance and diversity, one that we in Australia, Denmark, and Greece are able to enjoy. He congratulated the local Hellenic community in taking this important step to create a permanent marker honouring Anders and his role in liberating Thessaloniki in 1944.

Mr Ravnholt said that the plaque would be displayed at Denmark House and hoped there would be further collaborations between the Greek and Danish communities in Australia. He looked forward to attending the coming annual Thessaloniki-Melbourne sister city celebrations to be held at Federation Square later this month.

* Jim Claven is a trained historian and freelance writer. The most recent biography of Anders has been written by Danish historian Thomas Harder in Danish. Jim and Thomas are keen to hear from anyone in the community with personal experience or family memories of Anders Lassen and his role in the liberation of Greece. Contact Jim by email at jimclaven@yahoo.com.au.