The Greek side of the Australian Open

We take a look at the Greek and Cypriot players taking part in this year’s Australian Open, their accomplishments in the sport so far, and what can be expected from them 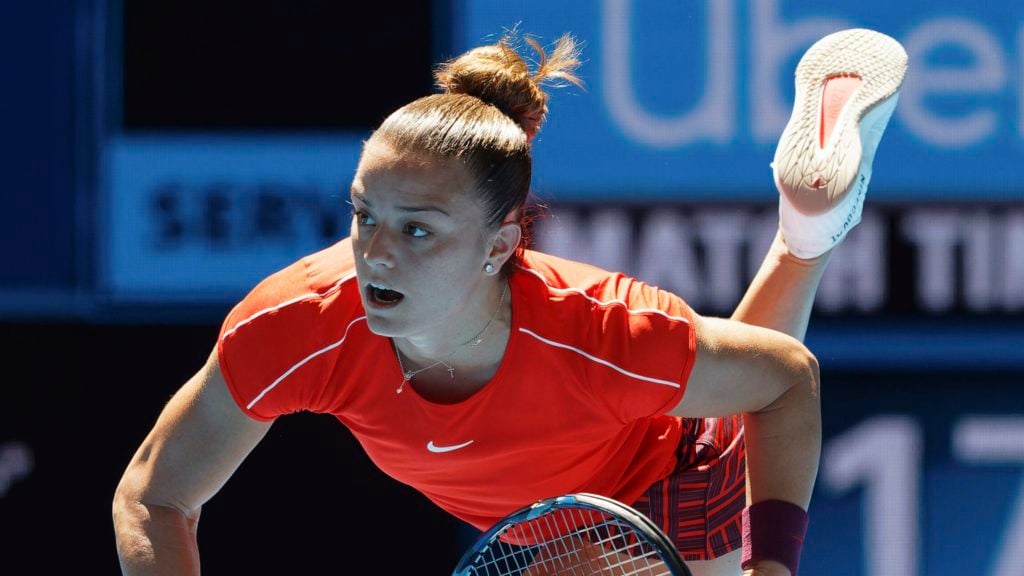 Maria Sakkari has proven she’s in top form heading into the first Grand Slam tournament of the year. Photo: AAP via AP/Trevor Collens

The 107th edition of the Australian Open is ready to begin. The first of the four tournaments that carry the highly coveted “Grand Slam” title (the others being the French Open, the US Open and Wimbledon), which is the pinnacle of tennis, will take place in Melbourne from 14 till 27 of January and all the most important representatives of the sport are finalising their preparations in order to be in perfect shape for the competition.

Among those appearing at this year’s version of the Australian Open will be none other than Roger Federer, Rafael Nadal, Serena Williams and Caroline Wozniacki.

Of course, with so many players from all over the world participating in this event, it is only natural that there are submissions from Greece and Cyprus. Some of these players might be more known than others, however they all deserve special mention for participating in one of the most difficult challenges in the entire tennis industry and for continuing to show their dedication to the sport, no matter the nation they choose to represent. Below are the participants and a small intro on their course so far:

Raluca Georgiana Serban; The Romanian-born 21 year old will be representing Cyprus. She began her professional tennis career just last season and is placed on number 217 on the worldwide ranking, which is her highest position. Still more to come from her.

Jaimee Fourlis; The 19-year-old is of Greek descent but will be playing for Australia. She reached the second round of the 2017 edition of the Australian Open, while participating in all four Grand Slam tournaments of that season. Fourlis is currently ranked at 206, with her highest position being 194. She will begin the Australian Open from the qualifiers, hoping to make it to the final round. She is a promising young player with her best games still ahead of her.

Thanasi Kokkinakis; The bright new hope of Greek/Australian tennis, Kokkinakis became a professional at the age of 15, while he made it to his first Grand Slam tournament (Australian Open) at just 18 years old, going all the way to the third round of the competition. In that same year, he sealed his place within the top 100 players of the worldwide rankings, topping at number 69. Following a year of injuries, Kokkinakis has been trying to regain his form and will hope the Australian Open will be the start of something great for him. He’s currently ranked at number 146.

Nick Kyrgios; An athlete that seems to be on the tabloids more for his behaviour rather than his performances, yet despite this fact, Kyrgios remains the best representative Australian tennis has to offer. Having reached the third round of two Grand Slam tournaments on five different occasions (French and US Open) and scoring impressive victories over well-known opponents (most recent being his win over Rafa Nadal for the FAST4 tournament in Sydney), Kyrgios’ talent is undeniable. However his temperament doesn’t allow him to maintain a steady course of results, as he has often appeared to lose interest in the sport. Additionally, he has verbally attacked his opponents and the officials more than once, leaving crowds to wonder what he will come up with next. Definitely a person of interest at this year’s Australian Open, for one reason or another.

Maria Sakkari; The first of two Greeks that gained media attention in Greece last season for her accomplishments, Sakkari is a prime example of the saying “the apple doesn’t fall far from the tree”, as she seems to be following in the footsteps of her mother, Aggeliki Kanellopoulou, who was a great player herself, ranked within the top 50. Sakkari began to show glimpses of her talent in 2017, when she made it to the third round of all but one Grand Slam competitions (Australian Open, Wimbledon, US Open). One year later, she reached the third round in the French Open as well, while also making her name heard around the globe after her victory against Venus Williams. She is currently placed at number 45 on the worldwide rankings, having peaked at number 29.

Stefanos Tsitsipas; The name most familiar with Greek tennis at the moment, the 20-year-old from Vouliagmeni is all the hype at the Australian Open not just for the Greeks but for all tennis lovers, who can’t wait to see what he does next. He played professionally at 15, while last year he gained worldwide recognition after playing in all four Grand Slams and making it to the fourth round of the Wimbledon. He has secured major wins against players seeded within the Top-10, such as Kevin Anderson, Alexander Zverev and, most notably, Novak Djokovic. He reached number 15 on the worldwide ranking, a position he holds until today. Tsitsipas is one of the players to keep an eye on.

The qualifiers for the 2019 Australian Open will begin on 8 January, while the draw for the final round will be made on Thursday 10 January.