Following the recent publication of 'Mykonos: Portrait of a Vanished Era', the photographer shares some of his revered work and reveals what continues to draw him back to Greece time again

It was in 1954 that photographer Robert McCabe’s love affair with Greece began, in what was largely a case of serendipity.

“I was simply following my older brother, as I had for many years,” he told Neos Kosmos.

“He had been invited to come to Greece for a week by a friend from college who lived in Athens but whose family came from Santorini. The week in Greece turned into that entire summer of 1954. And that has turned into a lifetime.”

McCabe recalls photographing Greece in the 1950’s as “a great joy”; when life was vastly different than it is today. During that time there was no electricity, let alone phones. Donkeys took the place of cars and motorbikes for transportation, while access to water meant taking a trip to the well or fountain.

“We had a sense going from island to island that we were discovering new unknown civilisations. Each island had developed its own culture and identity: its own architecture, songs, dances, stories, weaving designs,” he remembers.

“There were very few tourists and the people were extremely hospitable and curious. It was a thrill for them to be photographed. And a thrill for me to have a camera.”

The week in Greece turned into that entire summer of 1954. And that has turned into a lifetime.

As we correspond, McCabe is in New York, where much of his own story is linked.

Born in Chicago in 1934, he first started taking photos at the tender age of five, when his father, the publisher of a tabloid newspaper in the Big Apple, gifted him a Kodak Baby Brownie. That’s when he “immediately started looking for tabloid photo opportunities”.

“It was all about photography — of newsworthy subjects: accidents, celebrities, etc. The paper had a competitor, so the drive to be the first with the best pictures was very strong. The two papers had ‘radio cars’ tuned to police radio channels and a photographer ready for action. I used to go out with them when I was a teenager,” he says.

“I have photos of hurricane damage, of a man hit by a train, of a boy who fell through the ice, of auto accidents,” several of which were published.

However a move to a school in a quiet village in western Massachusetts, with no hope of tabloid photos, saw his attention turn to still-life photography and landscapes – an interest that would see him go on to document those of not only Greece, but cities the likes of New York, and countries from Cuba and China, to Antarctica.

Following the first summer McCabe spent in Greece, he next returned in 1957 at the request of National Geographic Magazine to photograph the Cyclades, many of which feature in his book ‘Mykonos: Portrait of a Vanished Era’ released last month. 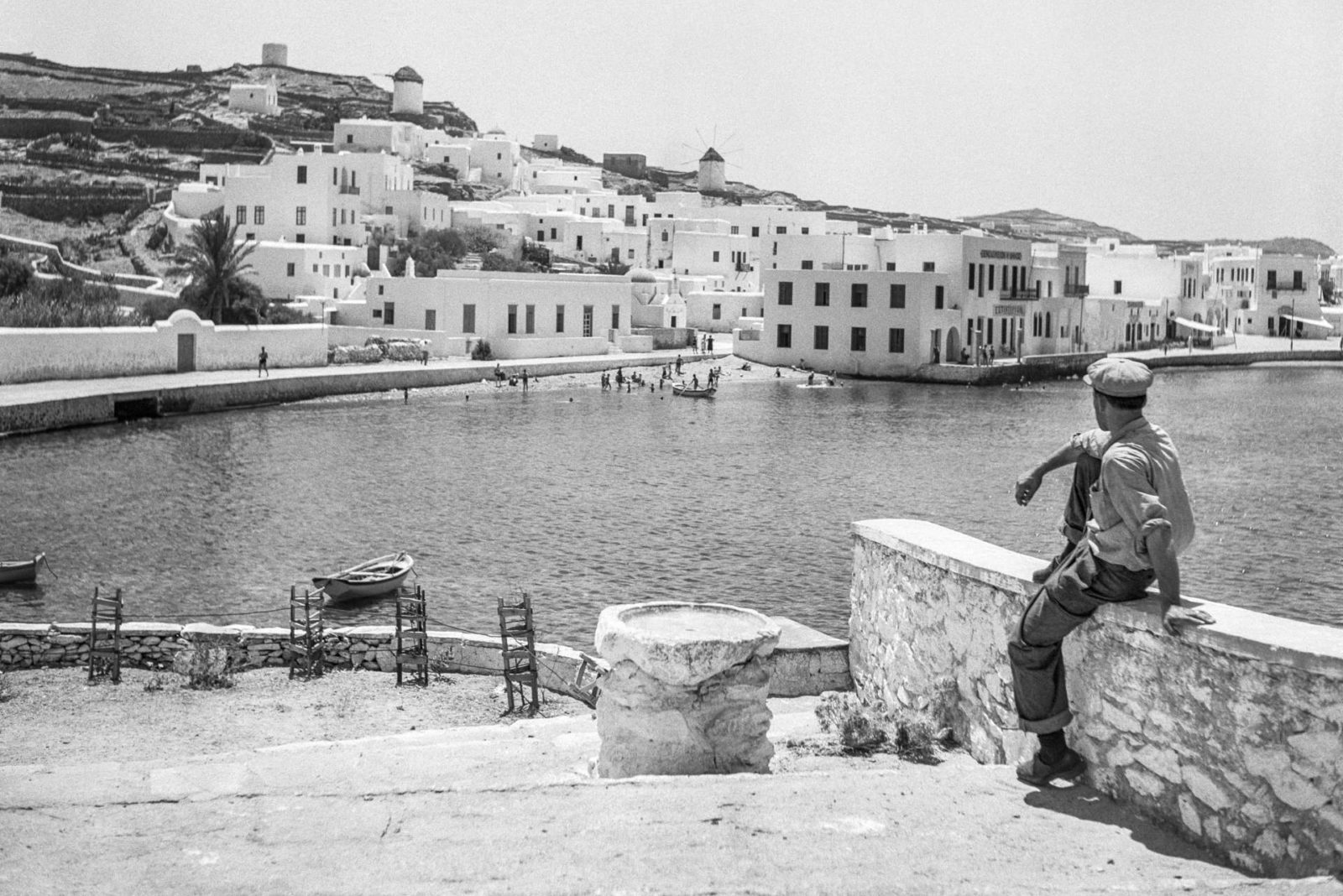 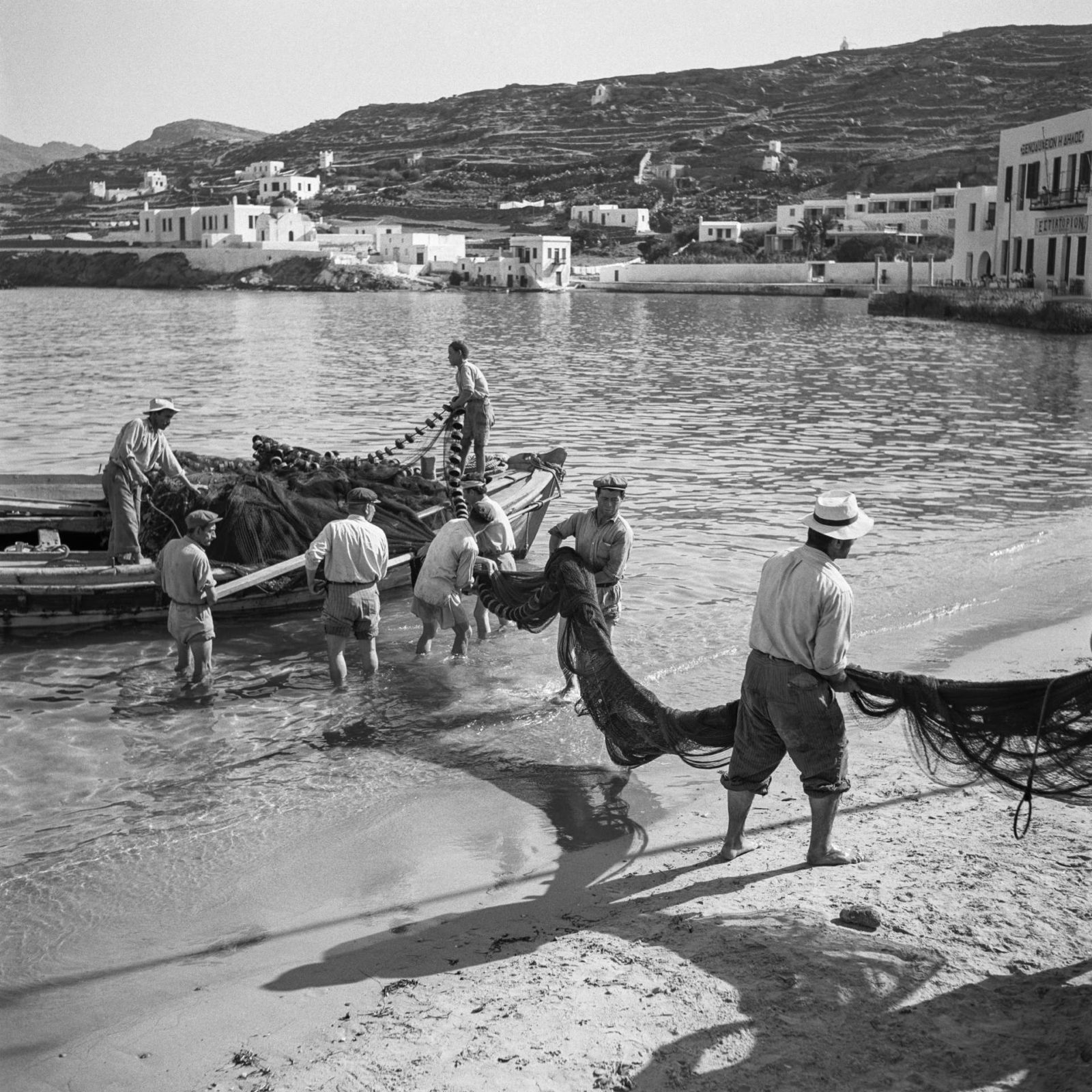 But what is it about his photos, namely those of Greece, that continue to resonate with people around the world, over 60 years on? Aside from documenting history, it is also nostalgia of a bygone era.

“Part of it may be the evocation of a special period in Greek history, as the country emerged from years of extreme hardship and there was a sense of mutual dependency in the villages and cities. The photos were taken on the threshold of incredibly dramatic change and portray a way of life that has essentially disappeared,” McCabe explains.

He says the impact of tourism is undeniable.

“Greece has come from the extreme poverty of the post Nazi and post Civil War period to relative prosperity. Of course there has been a dramatic setback in recent years. Tourism has played an important role. When I first visited Greece in 1954 I believe there were 180,000 visitors for the year. Today there are around 30,000,000, I believe. Mykonos alone now may have as many as 150,000 a day! You can imagine the impact that has had on the traditional culture and way of life.”

Just as Greece has changed throughout his lifetime, so too has his medium of choice, McCabe admitting he was initially “very sceptical of digital photography” because of the poor resolution. But he says he was eventually seduced by the instant feedback, and subsequent control in his work, digital provided.

“I found that with no concerns about film costs and instant feedback there were extraordinary opportunities to learn through trial and error. Experiments with composition and exposure were easy. It really has helped me understand better the elements that make a memorable photograph,” he explains.

McCabe wasn’t kidding when he said that first summer in Greece turned into a lifetime.

Now aged in his 80’s, he currently has a long list of projects he is working on, among them a book of photographs from Santorini 1954 and 1955 before tourism, and the devastating earthquake of 1956; a book of photos of Kassos in 1965 “when travellers to Athens still had to get into a tender off the rocks!” along with a book documenting the life on Greek freighters, amongst others.