Melbourne's architectural gem will soon be brought back to life, but the Ithacan migrant instrumental to its creation is often forgotten

News about the reopening of Melbourne’s Capitol Theatre this month was received with great enthusiasm by a diverse audience: city officials, academics and the intelligentsia, business people to art aficionados were all excited to hear that the cultural icon would open its doors again after five years. And they are right to be excited.

The National Trust listed building is about to return to its former glory and more, operating as a cinema – as it started back in 1924 – but also destined to become a cultural and educational hub.

The establishment’s trajectory is a typical rise-and-fall story. Following years of fame as one of the first and most spectacular ‘picture palaces’ in the Southern hemisphere, it gradually saw its popularity decline from the 50’s onward, as television and modern multiplex cinemas took over the reins of entertainment.

After being purchased by RMIT University in 1999, it was mainly used as a lecture theatre and remained closed from 2014.

Now, following two years of intensive restoration and refurbishment works costing over $20 million – thanks to the state government and private donors pitching in – the Capitol Theatre has been brought back to life, ready to host film screenings, festivals, events, conferences and to expand its use as a learning space.

Ahead of what looks like a bright future for the heritage building, most, if not all reports about its reopening have paid tribute to the architectural American duo who designed it, Walter Burley Griffin and Marion Mahony Griffin, also designers of the city of Canberra. Sadly however, there has been a loud absence: the role of the person who commissioned the project, Greek Australian businessman Anthony Lucas (Antonios Lekatsas).

Arnold Zable, an acclaimed writer who has conducted extensive research on the Capitol Theatre’s beginnings, points to the Capitol’s forgotten history..

“I find it interesting that no one is mentioning that part of the story. All you hear about it is the Griffins,” Zable said.”But the full story includes Ithacan immigrant, Anthony JJ Lucas. This was a visionary partnership between him and the Griffins and they could not have done it without him willing to take the risk …” A GREAT MAN BEHIND THE GREAT ESTABLISHMENT
Zable first heard of Anthony Lucas – or Antonios Lekatsas as was his name before he changed it – during regular visits to the Greek island of Ithaca where his wife’s family hails from.

“Dora’s maternal grandfather was from a place called Exogi,” he explains.

“I came to love that village and Ithaca and started talking to people and documenting stories. One of the stories I heard was about Antonios Lekatsas who was born there.
“He was the son of a village priest who came to Melbourne in the 1880’s and worked his way up to become what I would call the coffee palace king of Melbourne.”

Zable refers to an era when Lucas and fine dining had become synonymous, being the owner of three of the city’s biggest cafes – Paris and Vienna Cafes on Collins street as well as the Town Hall Cafe on the site of the present Capitol Theatre on Swanston Street.

“These coffee palaces were amazing,” he exclaims, “they were three storeys high, they had French chefs, smoke rooms, boudoirs for ladies, card rooms, all sorts of spaces … There were other people including Greeks owning these kind of cafes but Lucas was the stand out. He owned three of them. I mean, can you imagine? The Town Hall Cafe alone could seat over 600 people.” 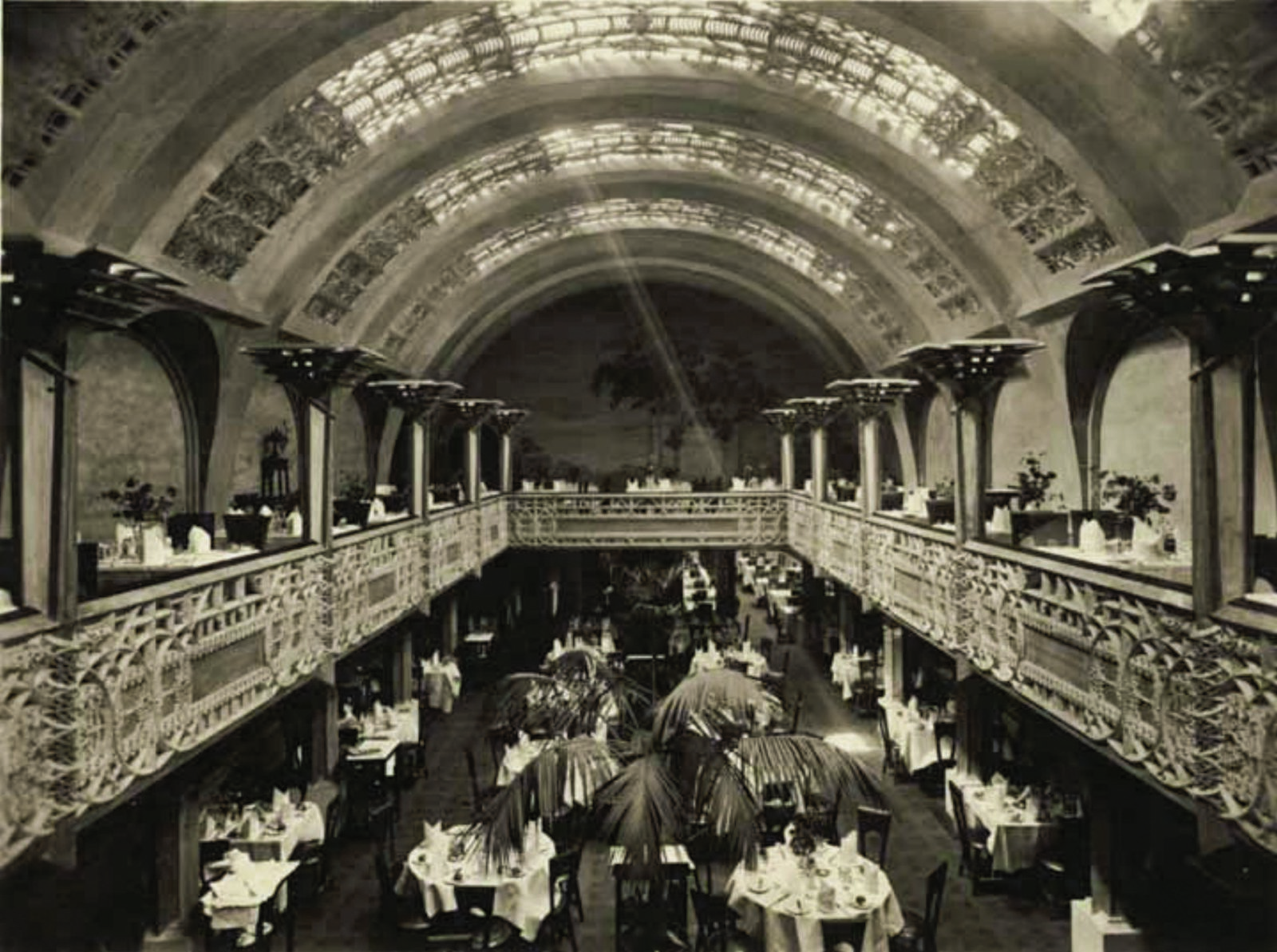 And if this sounds already remarkable for someone who came to Australia as a penniless migrant in his 20’s, wait until you hear the rest.

On top of being a game-changer, the Greek businessman was a trailblazer within the Greek Community of Melbourne, which he helped establish in 1897, before going on to serve three terms as president.

Not forgetting his humble beginnings, he made generous donations to charities and eagerly assisted those in need.

In 1916, along with a group of fellow Ithacan entrepreneurs, he co-founded the Ithacan Philanthropic Society, to support compatriots back at the island and newcomers from Greece, while later on he was appointed Honorary Consul General of Greece in Sydney (1923-1926) and Melbourne (1931 -1946).

Despite his contributions, Lucas wasn’t spared the xenophobic attitudes prevalent in Australia at the time.

Zable’s novel Sea of Many Returns, where Lucas features as a character, sheds light to the sentiment of the era.

In 1915, his Vienna Cafe was targeted by a group of drunken soldiers for bearing ‘the name of the enemy’. They damaged the premises and threatened patrons but Lucas was not discouraged. In what was his first collaboration with the Griffins, he hired the Chicago husband and wife architects to remodel the business, which was reopened in 1916 as the Australia Cafe.

“They created this extraordinary place which is regarded by some as the beginning of modernistic architecture in Australia,” says Zable, who has included a detailed description of what the cafe looked like in his book.

But the best was yet to come.

Under the direction of Lucas, the Griffins pulled down his Town Hall cafe to build the Capitol Theatre in its place.

At the heart of this story is the partnership between the Ithacan immigrant who grew up in a distant mountain village, a village boy who comes to the distant city of Melbourne and worked his way up with the Griffins architects who came from Chicago. So what you have here is an example of what happens when people cross cultural boundaries and work together circulate ideas that lead to things like … the Capitol Theatre.

‘ONE OF THE BEST STORIES OF MULTICULTURALISM’
The Greek Australian entrepreneur provided the space for the architectural duo to unleash their talent and experiment. The result? A multi-storey building hailed as one of the earliest examples of art deco architecture.

Notably, one of the most spectacular features was the geometric illuminated ceiling of the theatre auditorium with the capacity to seat more than 2,000 patrons.

“It was amazing to walk into a cinema like this designed to resemble a crystallised cave, with over 4,000 lights flashing different colours,” Zable says.

“They must have thought, ‘We’ll make this the greatest cinema and theatre in the Southern hemisphere’, which I think it was.
“We’re looking at the vision brought by an immigrant and the willingness to create daring projects, to take the risk. I think that’s a big part of the story.” The Capitol Theatre will be restored to its former glory. Photo: Tatjana Plitt A glimpse of the magnificent geometric ceiling of the theatre.

The ambitious plan came into fruition in 1924, with 8 November marking the opening night, which Zable has recreated in his novel based on research and complemented with imagination.

“The opening screening was Cecil B. DeMille’s The Ten Commandments, a very famous film that was made at the time with epic biblical scenes.
“It was a silent film era, so the film would show while an orchestra was playing, and with 2,000 people attending it must have been an amazing night,” he describes.

“It’s a wonderful thing for a novelist to imagine.”

According to Zable, the tale behind the beginnings of the Capitol Theatre is one of the best stories of multiculturalism.

“It shows why immigration is so vital for the countries that take in immigrants, because they bring with them a lot of daring and new ideas and energy, they don’t take things for granted … I think that cultures thrive through diversity, countries benefit from diversity.
“At the heart of this story is the partnership between the Ithacan immigrant who grew up in a distant mountain village, a village boy who comes to the distant city of Melbourne and worked his way up with the Griffins architects who came from Chicago. So what you have here is an example of what happens when people cross cultural boundaries and work together circulate ideas that lead to things like … the Capitol Theatre.”