Diving the Mentor: revealing the secrets of Elgin’s ship with the support of the Greek Australian community

Since 2011 archaeologist Dimitris Kourkoumelis has led the excavations on the Mentor shipwreck, the remains of the ship that sank off Kythera in 1802 with much of what we know today as the Parthenon Frieze. Michael Sweet talks to the man revealing Mentor’s precious secrets 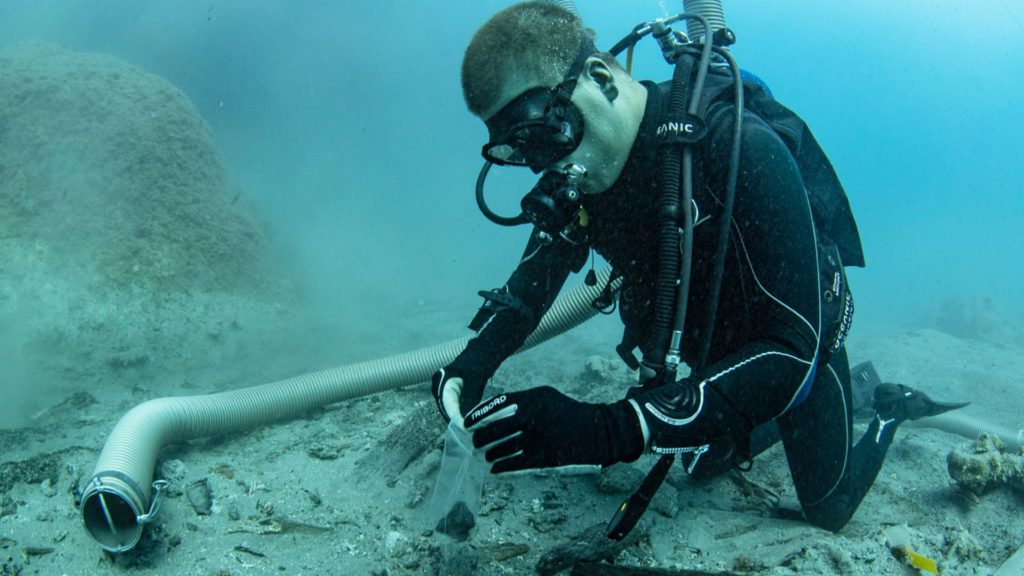 It was as a teenager that Dimitris Kourkoumelis was first drawn to archaeology, during a school trip to Epiros and the ancient sanctuary of Zeus at Dodona.

Spellbound by the 4th century BC oracle site, the Corfu-born Dimitris was hooked. By the mid-1980s he had turned his childhood passion into academic study – at the University of Provence in Aix-en-Provence. A PhD followed, based on the trade and economy of ancient Corfu evidenced by findings of amphorae.

“My professor was Andre Tchernia, a pioneer of underwater archaeology in France and I remember him telling me that as I came from Greece, and from an island, I couldn’t be anything other than a marine archaeologist. I loved finding things,” Dr Kourkoumelis tells Neos Kosmos.

Today Dr Kourkoumelis is one of Greece’s top underwater archaeologists, leading the work of the Hellenic Ministry of Culture’s Department of Underwater Antiquities in northern Greece. And while this youthful 60-year-old has dived on scores of the Aegean’s most significant shipwrecks, no site holds more intrigue than that of the early 19th century British brig, the Mentor, in Kythera’s Avlomenos Bay.

It has been a decade since Dr Kourkoumelis was first asked to explore the wreck by Greece’s Ministry of Culture, keen to extract whatever was left of the symbolic ship and its cargo in the months before Athens’ New Acropolis Museum opened. The first exploratory dive found little but Dr Kourkoumelis was convinced that with more resources and longer dives, the wreck would reveal not only objects that would tell the ship’s story, but a period in history when Western Europe, obsessed with the ancient civilisations of the Mediterranean and Middle East, transported vast quantities of antiquities to museums and private collections.

“That’s how we were able to begin real excavation”, says Dr Kourkoumelis. “Our exploration in 2011 was the first since the 1980s, and with Australian support, particularly through the Nicolas Aroney Trust in Australia, we were able to finance dives most years.”

In Greece, the Hellenic Ministry of Culture and Sport (Department of Underwater Antiquities) has underpinned the excavations since 2010, with the Stavros Niarchos Foundation an early supporter along with the Ilios Shipping Company.

Key to the ongoing work are philanthropists passionate about the Mentor’s story.

Sydney construction magnate Peter Maneas, of Kytherian descent, has been a major supporter since coming on board in 2015 and dived on the wreck when filming his TV series My Greek Odyssey. The Kytherian Tryphillis family has also played a vital role.

To date, some 300 items have been recovered from the wreck, each a precious part of the story not only about the Parthenon Marbles’ extraction from Athens, but the individuals who accompanied the precious cargo, and the society they came from.

“These men were intellectuals,” says Dr Kourkoumelis. “For them, Ancient Greece reflected a civilisation that was lost completely and that is what fascinated Elgin and similar western collectors. Divers above the sunken remains of the Mentor in September 2019. Photo: MeSEP/EUA/HCMR/Yiannis Issaris The single element of the Mentor that remains is part of its hull, a section 10.6m long and 5.7m wide. Most of the objects found have been in the debris field around the hull. Photo: MeSEP/EUA/HCMR/Yiannis Issaris “There was an intellectual hunger in Europe in this period, an idea created in England, Germany, Italy and France, to recover what they could from ancient civilisations. It was a few decades before Darwin and his theories of evolution, so it was a time when research like this was an obsession.”

One of the individuals on the Mentor when it struck the rocks and who scrambled for the shore that stormy September night in 1802, was William Leake – a map maker and archaeologist and Kourkoumelis is sure some of the items found so far were Leake’s.

“He was a draftsman and a collector, and one item we found is the base of a topographic instrument that I’m sure belonged to him. We also found a red glass seal with a canon motif on it, which almost certainly was the property of the British army officer who was on board, John Squire.”

Leake, Squire and William Hamilton, Elgin’s personal secretary (and co-ordinator of the Mentor’s mission) – all British, were the senior passengers on the fateful voyage. William Eglen was the captain of the ship and along with the crew, three other passengers have been identified, almost certainly Leake, Squire and Hamilton’s servants.

As for its cargo, loaded into 17 wooden crates in Pireaus, no one knows exactly which pieces of the Parthenon Frieze were in them. “We know the cargo list, but we don’t have a description of which specific sculptures were loaded.

“What we do know is that there were pieces from the Temple of Nike and other sites in Athens too, all packed in crates that were perhaps two metres by one metre, and half a metre deep, each very heavy.”

A two-masted brig built in America in the late 18th century and used by the French navy after the American War of Independence, the Mentor’s movements before 1800 is intriguing, another part of what Dr Kourkoumelis describes as its “curious story”.

“France was fighting Britain, and we know it was captured by the British before Elgin purchased it. It would have started its journey from England to the Mediterranean in 1801 and Pireaus was the last stop on its journey that lasted about a year, It spent time at Alexandria, Smyrni and Constantinople, picking up antiquities, before coming to Athens”.

The wreck today, lying on the seabed 22 metres below the surface and only 10 metres from the shore, is about 25 per cent of the ship. Dr Kourkoumelis believes much of its upper section was destroyed soon after it sank – damage caused by the divers tasked within weeks by Hamilton to salvage the crates in their breathless struggles to haul each to the surface. 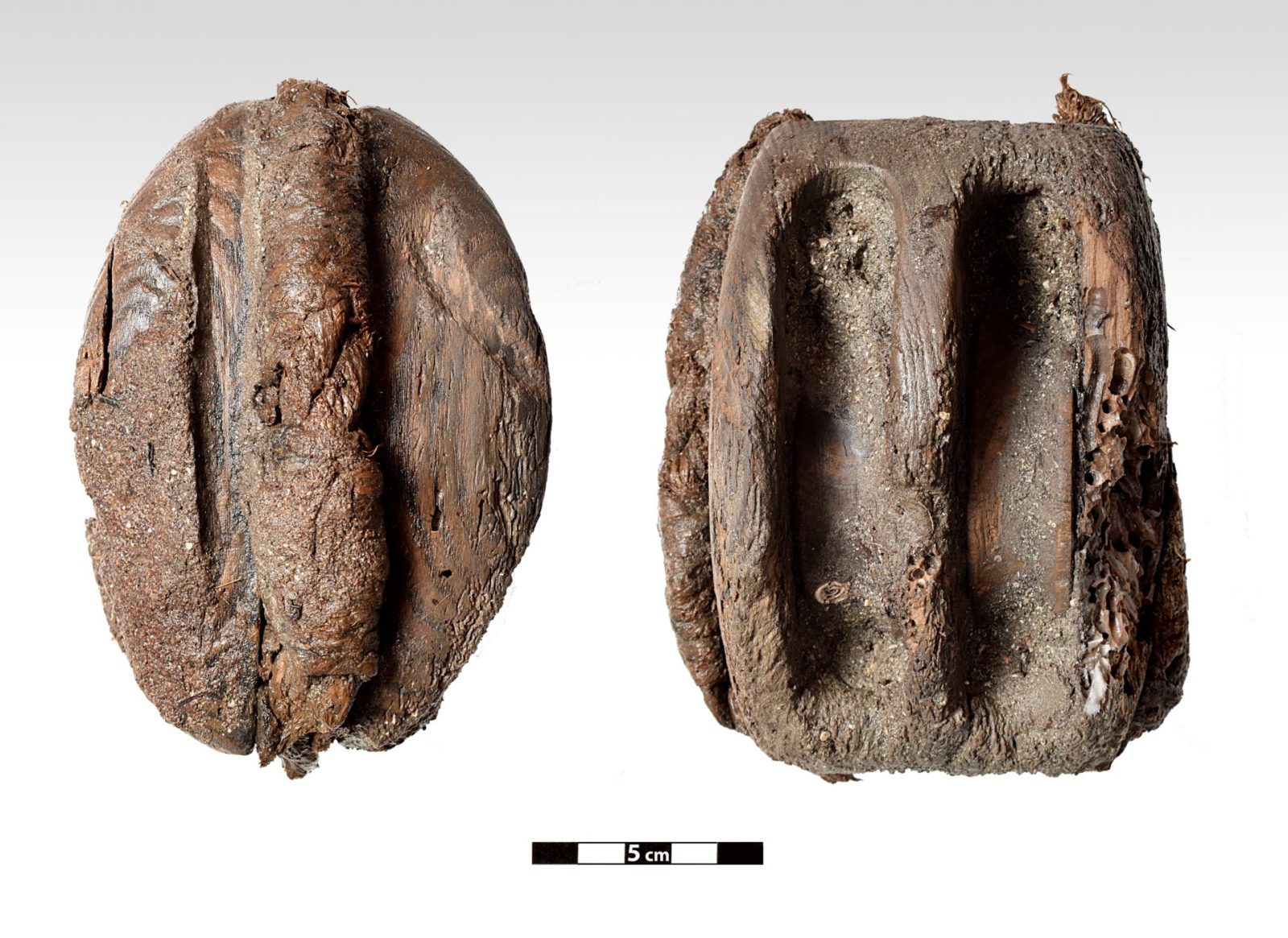 Pulley blocks that held ropes for the Mentor’s sails Recent years have seen explorations take place each August with around a team of about highly specialised archaeologists and divers able to spend 20 days on the site, but it’s an expensive exercise. Costing around €15000 [A$24000] per project, for excavations to continue Dr Kourkoumelis says new sponsorships will be vital.

“This year it was a really surprising excavation, we found many more objects away from the hull, but there’s still much to do. I would say there is at least two or three years more work.”

All the items salvaged Dr Kourkoumelis and his team are currently being painstakingly restored by the Department of Underwater Antiquities in Athens and plans are afoot for an exhibition, possibly at the New Acropolis Museum. It would be an ironic venue; the designated future home of the Parthenon Frieze, if and when returned to Athens.

But there could be no more appropriate setting to present the Mentor’s story – a narrative vital to understanding the modern history of Greece and the nature of cultural colonialism.

The first of three ships loaded with antiquities stripped from the Parthenon in Athens, the Mentor left the port of Pireaus on 15 September 1802. Two days later it sank off Kythera, with its crew and passengers losing all their belongings, but all surviving. Sponge divers (from the islands of Kalymnos and Symi) were contracted by William Hamilton, on Lord Elgin’s behalf, to salvage the 17 crates of antiquities, but it would take two years for the work to be complete. By early 1805, after the intervention of Lord Nelson, the crates were in Malta on their way to London, via Gibraltar, to join the rest of what became known as ‘the Elgin Marbles’. In 1816 Elgin sold the Parthenon Frieze for £35,000 to the British government and the collection was given to the trustees of the British Museum in perpetuity.

Mentor segment from ‘My Greek Odyssey’: