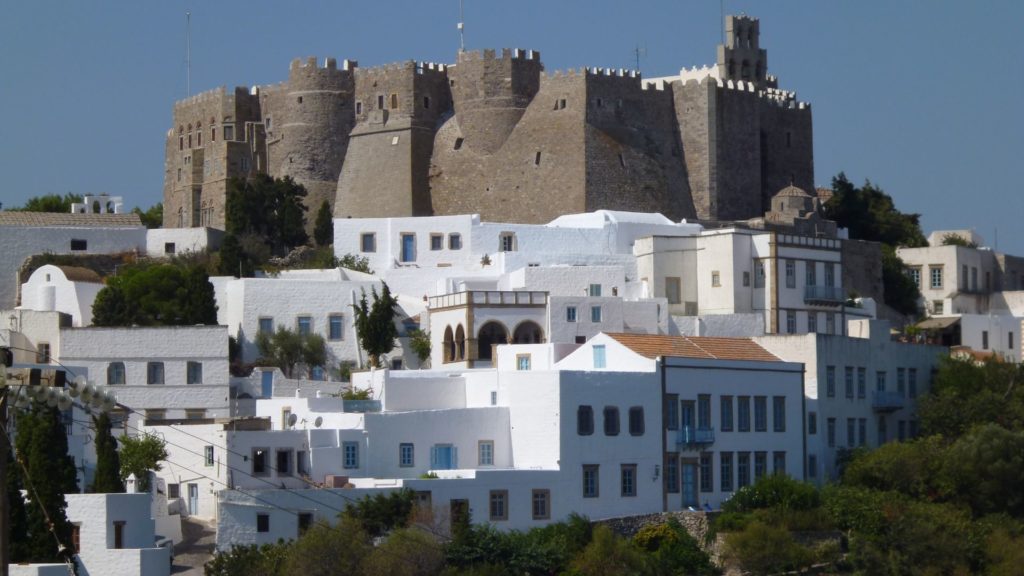 If you are looking for a Greek island holiday that will revive your body and nurture your soul, then Patmos is the place to go. A few years ago my husband and I travelled to Patmos, one of the northernmost islands of the Dodecanese.

It really is a special island. To the Greeks and Christians from all over the world, it is a holy island, the ‘Jerusalem of the Aegean’, all because of one man. This man was the disciple John, or Agios Ioannis. He was the beloved disciple of Jesus and the only one of the 12 disciples to witness Jesus’ crucifixion alongside Jesus’ Mother, Mary.

Patmos is a beautiful destination in its own right. Beaches are pristine and accessible; every afternoon we bathed in beautiful water a short stroll from our domatio (room).

The whole island has an old-fashioned feel possibly because of the significant spiritual events of the past and the fact that even today Patmos is not an easy place to get to. It is far from mainland Greece and there is no airport on the island. The closest airports are on Leros to the south or Samos to the north. From there you can travel by local ferries to Patmos. The big ferries from Piraeus take about 11 hours to make the 330-kilometre trip.

Written some 50 years after the death of Christ, Revelation records the sweeping vision received by Agios Ioannis and recorded by his disciple Prohorus.

As we arrived in the small port of Skala, the first thing we saw was the imposing white-washed Monastery of St John the Theologian, towering above the capital of the island, Hora. Both the Monastery and town below it are UNESCO World Heritage sites.But our main reason for coming was to spend some time in the Cave of the Apocalypse, where Agios Ioannis wrote the last book of the Bible, the Book of Revelation. He had been exiled from his home in Ephesus by the Romans to this remote part of the Roman Empire.
This book, Revelation, has intrigued and mystified scholars and ordinary people for nearly 2,000 years. Written some 50 years after the death of Christ, Revelation records the sweeping vision received by Agios Ioannis and recorded by his disciple Prohorus. He had visions in the cave depicting the destruction of this world and the coming of a new golden era of heaven on earth.

John’s teaching of the new religion, that did not recognise the Emperor’s divine status, displeased the Roman authorities at the time. Banned from preaching or speaking to anyone about spiritual matters, John, by now a frail, old man, would climb up from the squalor and noise of the port town to the quiet of the cave, to pray and meditate and seek solace in his isolation.

From the cave he could look out across the Aegean Sea to the faint outline of the coast of what is now Turkey, to his home in Ephesus, to which he would never return. It is significant that in Revelation he states symbolically that in the new world there will be “no more sea”, meaning that in this new age of brotherhood there will be no more division among men.

Of course, the symbolism used in Revelation and specifically the timing of the End of Days, Armageddon, and the subsequent Second Coming of Christ have been the source of endless speculation ever since they were delivered as letters to the seven early Christian churches of John’s era. Naturally these first recipients believed that John’s vision would come to pass in their lifetime to overthrow the tyranny of Roman rule and usher in this new golden age. Ever since people have been looking for signs of the times to show others that these events would occur on this or that particular date. These attempts to decipher the great secrets of Revelation may seem somewhat futile in light of Jesus’ own statement that the end times would come “like a thief in the night” and that “no-one knows the hour or the day”. One thing however is certain. This enigmatic mystery that is the Book of Revelation has kept people intrigued and interested in the subject of a perfect, new world for nearly two millennia.

Each morning during our two week stay on Patmos we would make the trek up the walking trail to the cave where John sat in contemplation so long ago. It’s about a 30-minute walk from the harbour, taking the shorter route up the ‘old pathway’, to the Monastery. There are spectacular views of the bay and harbour below. The Cave of the Apocalypse is about half way between the port and the Monastery.

In the cave we would spend some time meditating and attuning ourselves to the spirit of the place. The cave has now been walled in on the eastern side to form a tiny church and one can gaze out across the vivid Aegean Sea to the faint coastline of Turkey just as John did. You can still see the small indentation at the base of the cave wall where John used to rest his head and the crevice just above that which he used as a handhold to raise his old body.

Although the cave is often packed with pilgrims, from the stream of tourist buses which lumber up from the port, if you go there early when the monastery first opens, you can sometimes have five or 10 minutes in the cave in perfect solitude. There is a profound and uplifting feeling in the cave unlike anything I had felt in other holy places and the spiritual presence here can be almost overpowering.

After our time in the cave we would climb back up the several flights of whitewashed stairs to the entrance and once outside the gates we would go to a quiet spot and sit in the shade of some nearby pines. There I would meditate on John’s life and time here and try to imagine what message he would give to the world if he came back to speak to us now.

With each passing day I began to feel more and more connected to St John and so I started to write down what I thought John would say to the world.
Here is what I think he might want to say to us today:

I lived in a time just like this when people were confused about their spiritual values. I learned from the Master, Jesus Christ, to see the divinity within ourselves and all of God’s creatures. Jesus gave all of us new teachings that heralded a road filled with Divine Love, if we prayed and meditated on the meaning of His words.

When I spent time in the cave on Patmos I found great peace within my being. I experienced a fulfilment within my soul as I continued to connect with God just as I had experienced the same feeling when I listened to Jesus’ words. You, however, do not have to find a cave to experience the unconditional love of your true Parent.

The teachings of Jesus can become real for you too when you understand that every word that Jesus spoke was underpinned by divine love and they are just as relevant now as they were then.

The words “love one another” must now be realised just as they needed to have been when Jesus spoke them. To love one another we need to be able to curb the dark thoughts, words and actions that take a hold of us most of the time.

It was easy to love and be loved by Jesus for here was a man that emitted a pure, fragrant, divine love that held all of us safely together.

You too can be held in the arms of God and within your heart the overflowing love of Christ can carry you through your day. Remember that you have come from the Divine Source of life and therefore you too are worthy of God’s ever present love.

I hope these words, which I felt inspired to write at John’s cave on Patmos might also resonate with you too. You also might be drawn to visit Patmos and even go on a spiritual pilgrimage in your thinking by connecting with the Master Jesus Christ and his beloved disciple Agios Ioannis.

LOCATION
One of the most northernmost islands of the Dodecanese, Patmos is a small Greek island in the Aegean Sea. It’s highest point is Profitis Ilias, 269 metres above sea level.
POPULATION
The island has a population of 3,047 people.
SISTER CITIES
Patmos is twinned with Auderghem, Belgium; Grottaferrata, Italy; and Glastonbury, United Kingdom.
BEST BEACHES
One of the island’s most beautiful beaches is Lambi in the north. The beach is known for its rare multi-coloured pebbles.
Remote Livadi ton Kalogiron, Agriolivado, Kambos Grikos are other beaches that the island is known for.
Yoga practitioners are drawn to Petra (Kalikatsou) that is a rock formation connected to the island by a thin strip of land as it is expected to emit a special energy. Geologists say that it was created by volcanic activity millions of years ago.
NEARBY ISLETS
Arkoi and Marathoi are both under the jurisdiction of the Municipality of Patmos. Day trips can be organised, however there is limited accommodation for those who wish to stay overnight.
FESTIVALS
The Patmos International Film Festival takes place on the island each year in July. There are screenings, workshops, seminars and a short film competition. Visit https://www.aegeanff.com/ to find out more.
There’s also the Religious Music festival held at the end of August.
FERRY
There are regular ferry services connecting Paros to the following ports: Agathonissi Island, Mykonos Island, Paros Island, Piraeus (the main port of Athens), Pythagoreio and Karlovassi on Samos Island, Syros Island, Leros Island, Naxos Island, Arkoi, Lipsi Island, Symi Island and Rhodes Island.